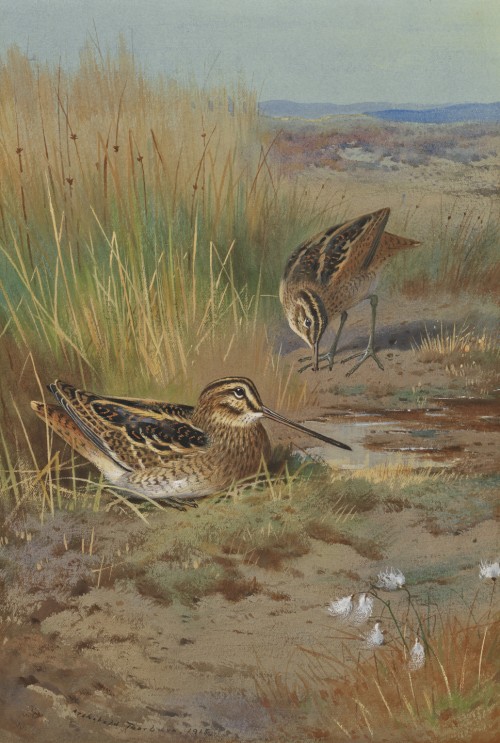 from whom acquired in 1984 by an American private collector

Snipe, with their elegant shape and distinctive plumage, are favourite birds in the paintings and watercolours of Archibald Thorburn. They are wading birds which use their long bills to probe for worms, small molluscs and other invertebrates in the marshes where they live. Common Snipe (Gallinago gallinago) breed throughout northern Europe and Asia, migrating by night to southern Europe and Asia in the winter. They are known for dazzling, spiral courting rituals and for rapid, erratic, plunging dives.

Thorburn was as fine a watercolourist as he was an oil painter. Here he brilliantly evokes the habitat of the snipe as well as the intricate patterns of the feathers which give them superb camouflage in dry, shimmering rushes and sandy mud. Distant blue hills give depth to the picture and add to the sense of pristine wilderness.

Archibald Thorburn, the finest bird painter which Britain has ever produced, was born on 31st May 1860 at Laaswade near Edinburgh. He was the fifth son of Robert Thorburn, a leading miniature painter of the day and a favourite of Queen Victoria. Archibald received much of his early training from his father, whose insistence upon anatomical accuracy and careful attention to detail stood him in good stead. He also studied with the animal painter Joseph Wolf.

Thorburn's first published colour plate appeared in W F Swaysland's Familiar Wild Birds (1883) and his last, posthumously, in Archer & Godman's The Birds of British Somaliland and the Gulf of Aden (1927). In between he illustrated - and sometimes wrote - innumerable volumes. Thorburn's remarkable technical abilities, combined with a freshness not seen before, quickly established him as the principal illustrator for many leading sporting and natural history authors of the late nineteenth and early twentieth centuries. The monumental work Thorburn carried out for Lord Lilford between 1885-98, in which he completed some 268 watercolours for Coloured Figures of the Birds of the British Islands, established his place in bird art.

Thorburn exhibited at the Royal Academy from 1880 to 1900.  His entries were invariably huge, compelling and technically brilliant watercolours, often of grouse, deer or eagles.  However, by 1900 he had become disenchanted at the way his work was regularly hung high and he decided to concentrate upon book illustration and private commissions.

Archibald Thorburn began life as a sportsman, regularly finding himself as a guest at shooting parties, including those Sandringham, both to shoot and paint; his work was collected by Edward VII and George V. However, he ended his life as a conservationist, having hung up his gun for good in the early years of the century upon wounding a hare and hearing its pitiful squeals.  In 1927 he was elected Vice President of the RSPB in recognition of his services on behalf of bird preservation.

Following his father's death in 1885, Thorburn came to London before moving to Hascombe in Surrey in 1902, where he was to live for the rest of his life.  He married Constance Mudie, daughter of the founder of the famous lending library, in 1896. At Hascombe, surrounded by some of the most beautiful woodland in England, Thorburn found himself amid an abundance of subjects.  Here most of his pheasant and woodcock pictures were conceived, as well as those of mice, hedgehogs and the host of small birds that dwelt in the surrounding countryside.

However, Thorburn never lost his love for his homeland and returned each year to the Highlands of Scotland to paint.  In 1889 he first visited Gaick in Inverness-shire, sketching the red deer, grouse, ptarmigan and eagles which were used as the basis for highly finished oils and watercolours back in the studio. Thorburn's pictures, unlike many of the period, remain free from sentimentality; with deft touch and great economy, he captured the rigours of life in the countryside, be it by mountain tarn or lowland stubble.