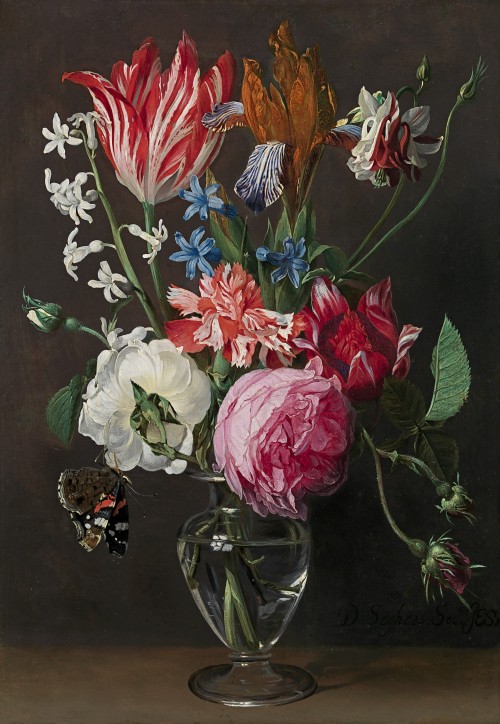 Still life of roses, an iris, hyacinths, columbine and a carnation in a glass vase, with a Red Admiral butterfly (Vanessa atalanta)

Still life of roses, an iris, hyacinths, columbine and a carnation in a glass vase, with a Red Admiral butterfly (Vanessa atalanta)

Daniel Seghers was a Jesuit priest famed throughout Europe for his delicate and exquisitely realistic still lifes. A pupil of Jan Brueghel the Elder (1568-1625), Seghers specialised in flower garlands, often surrounding a grisaille portrait of the Virgin May or a Saint supplied by a collaborating artist such as Erasmus Quellinus II (1607-1678). He also painted bouquets of flowers in a simple glass vase, as in this example. They are far rarer than his garlands: from an oeuvre of around 240 paintings, only thirty bouquets in vases are known to exist. The finest, including this painting, are in oil on copper, an expensive, smooth support which allowed Seghers to achieve the utmost subtlety in his delineation of flowers.

Seghers’s bouquets have a mesmerising purity and directness. In this painting, as always, the bouquet is contained in an unadorned glass vase, with its tiny reflection of the studio window among the flower stalks. Seghers chooses flowers readily found in gentlemen’s gardens in Antwerp, or in the garden of his own Jesuit house or the Order’s country estate: a tulip, roses, hyacinths, an iris, a carnation and columbine (or aquilegia). They are all just coming into bloom, or in pristine maturity. Working against a very dark background, Seghers applies the paint lusciously, in a less linear manner than his teacher Jan Brueghel the Elder: shapes and shadows are created through the bold juxtaposition of colour. The waxy beauty of the white hyacinth flowers, which twist in space, is created with rich white impasto set beside thinner grey shadows.

Seghers enjoys the drama of variegated flowers: the tulip, with its much-prized stripes of flame-red; the pattern on the iris petals and the dazzling mix of red and white on the columbine, which lights up the top right area of the composition. Warm colours, offset with white, are the leitmotif of this bouquet. Red and white was the most desirable colour combination for tulips, especially during the ‘Tulip mania’ in the northern Netherlands from 1634-7, when a single bulb of Semper Augustus changed hands for 10,000 guilders, the price of a substantial country estate[1]. The flame effect was caused by a virus and was totally unpredictable. This was true also for the splendid bicoloured anemone at centre right[2]. The columbine and the carnation might achieve their bicoloured effect naturally, though rarely.

Seghers characteristically places four dense, rounded flowers at the centre of the bouquet, emphasising the airy sinuosity of the rosebuds and the columbine stalks, which reach out to the corners of the copper panel. Given the artist’s status as a Jesuit priest, the echo of a cruciform shape is undoubtedly intentional. Founded in 1540 by the soldier St Ignatius of Loyola (1491-1556), the Jesuit Order was at the intellectual and cultural forefront of the Counter-Reformation. St Ignatius exhorted the members of his Order to go out and ‘find God in all things’; Seghers would have regarded his flower paintings as celebrating the glory of God’s Creation. His still lifes were often used as diplomatic gifts, particularly to Protestant Princes, a gentle assertion of the cultural superiority of the Catholic church.

As a Jesuit, in addition to his vows of poverty, chastity and obedience to the Pope, Seghers would have had a special dedication to the Virgin Mary, who held a key place in St Ignatius’s writings. This flowerpiece is shot through with Marian imagery. The rose and the iris[3] (fleur-de-lis) are associated with the Virgin and are often seen with her in fifteenth century Flemish paintings. The carnation (dianthos, or flower of God, in Greek), became associated with the divine love revealed by the Incarnation, the streaks of red among the white recalling Christ’s sacrifice upon the Cross. The Red Admiral butterfly, upside-down on the tip of the white rose, would have recalled to a seventeenth century viewer the Soul’s fragility and its eventual flight to Heaven.

Seghers determined his compositions by blocking in the main flowers with blobs of bright colour and adding ever more intricate layers to model the blooms. He conveys the different textures of the species, from the waxy quality of the hyacinths and tulip to the silky, translucent rose petals. His palette is clear and strong, and each flower emerges as an individual personality.

Like most flower painters of his day, Seghers brings together blooms that do not flower together in nature – the hyacinths in March, the tulip in April, the columbine in May, the roses and carnation in June. Such naturalistic-looking bouquets were assembled by reference to drawings (or perhaps oil studies) kept in the studio. A similar iris and bicoloured columbine appear in a Vase of flowers in the Fitzwilliam Museum, Cambridge[4], but Seghers always modifies his blooms so that his compositions strike the viewer with a delightful freshness.

In the late nineteenth century this painting was in the collection of the Gothenburg businessman, philanthropist and Member of Parliament Olof Wijk (1833-1901). It has descended in a European private collection.

Seghers’s fame spread throughout Europe. As a Jesuit, who had taken a vow of poverty, he was not allowed to accept payment for his work. His paintings were frequently used by his Order as diplomatic gifts, often to Protestant rulers, as symbols of the cultural resurgence of the Counter-Reformation. His works entered the collections of Prince Frederick Henry of Orange-Nassau, Queen Christina of Sweden, Scipione Borghese and Charles I of England; the young Charles II, exiled in the Netherlands, visited Seghers’s studio in 1649. The polymath Constantijn Huygens (1596-1687), Secretary to three Dutch Stadholders, maintained a lively correspondence with Seghers and they swapped poems and recipes for paints; Huygens declared that Seghers painted flowers so lifelike that ‘he could almost smell them’. In 1644 Seghers gave Huygens a garland of flowers which decorates a grisaille portrait of Huygens by Jan Cossiers (1600-1671). It has recently been acquired by the Mauritshuis in The Hague. Unusually for his time, at the age of seventy-one Daniel Seghers made an inventory of the 239 paintings that he had made and their destinations, entitled Catalogue van de bloem-stukken, die ik self met mijn hand heb geschildert en voor wie (Catalogue of the still lifes I painted and for whom)[5]. Seghers’s only pupil was Jan Philips van Thielen (1618-1667), but his style was highly influential. Seghers died in Antwerp in 1661.

[2] We are grateful to Dr Celia Fisher for her identification of and comments on the flowers.

[3] The iris shown by Seghers is a bulbous or Dutch iris (Iris xiphium), as in the seventeenth century no such unusual colour would have been achieved with a bearded iris (Iris germanica).