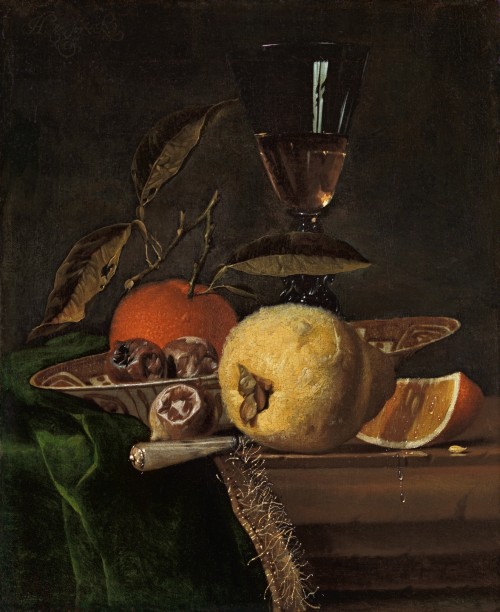 Still life with a quince, an orange and medlars in a Chinese porcelain bowl, with a façon-de-Venise glass of wine and a knife on a table top draped with a green cloth

Still life with a quince, an orange and medlars in a Chinese porcelain bowl, with a façon-de-Venise glass of wine and a knife on a table top draped with a green cloth

from whom acquired by Egon Rusche for the SØR Rusche Collection

LJ Bol, G Keyes and FC Butôt, Netherlandish Paintings and Drawings from the Collection of FC Butôt by Little-known and Rare Masters of the Seventeenth Century, London 1981, p.50, no.8, illus.

Hendrick van Streeck was a pupil of his father, the Amsterdam still life painter Juriaen van Streeck (1632-1687). This elegant still life, with its vivid colours and rich impasto, also reflects the influence of Willem Kalf (1619-1693), transmitted through his father’s work. In his later career Kalf specialized in pronkstilleven, lavish still lifes with luxurious textiles, porcelain and vessels in precious metal. This was typical of the Dutch fashion for rich display in the last decades of the seventeenth century, abandoning the ‘modesty’ of the early Dutch Republic and the ‘tonal’ still lifes of the 1630s.

Although on a smaller scale than Kalf’s complex compositions, this still life by Hendrick van Streeck chimes with the fashion for the finer things in life. The objects are arranged on a green velvet tablecloth fringed with gold thread. A knife with a mother-of-pearl handle juts from the edge of the table, perhaps a treasured ‘bride knife’ given (with matching fork) to a woman starting out on married life. Behind is a Ming porcelain dish of kraak ware, so called from the Portuguese ships (carracks) which transported it from China. Made for the Western market, it was characterized by broadly-designed natural and geometric motifs contained in panels, as can be seen here. The rim of the wide, shallow bowl is very fine, an effect achievable in Chinese wares, made of ‘true’, hard-paste porcelain, but difficult to mimic in Western substitutes, such as Delftware.

The fruit on the table is painted with brio: the pitted skin of the whole orange, probably a graceful nod to Holland’s ruling House of Orange; the rough, monumental quince and the slice of orange glistening with juice. In the dish are medlars, ripe and beginning to decay. Only when decay sets in are medlars edible: they have to be bletted, or stored in a dark place to soften. They were traditionally a winter treat. There is probably, in Streeck’s painting, a sense of vanitas: ‘ripeness is all’.

Crowning the apex of the triangular composition is a façon-de-Venise glass with an elaborate, twisted stem. Originally products of the superlative glass makers of Venice, by van Streeck’s day high quality copies of such wares were made in the Netherlands. A similar façon-de-Venise glass, as well as a mother-of-pearl knife, appear in a Still life with a nautilus cup by Juriaen van Streeck (with Richard Green in 1985; private collection)[1]. They were no doubt studio props employed by both father and son.

Hendrick van Streeck painted still lifes, church interiors and landscapes. He was born in the Jordaan area of Amsterdam in 1659, one of nine children of the still life painter Juriaen van Streeck (1632-1687) and his wife Grietje Claes. He trained with his father in the still life genre and with the sculptor Willem van der Hoeven from 1672 to 1677. In 1683 Hendrick married Maria van Hockom. Juriaen van Streeck kept an inn in Kerkstraat towards the end of his life; his son lived in Kerkstraat for most of his career.

After Juriaen’s death in 1687, Hendrick became a student of Emanuel de Witte (1617-1692), who specialised in painting church interiors. Hendrick van Streeck’s church interiors are in the style of de Witte’s late work, sometimes even following de Witte’s compositions. In 1696 Hendrick was involved in the decoration of the town hall in Alkmaar. He died in 1720 and was buried in the Nieuwe Kerk, Amsterdam.

The work of Hendrick van Streeck is represented in the Amsterdam Museum; the Hermitage, St Petersburg; Cincinnati Art Museum; the Walters Art Museum, Baltimore and the Musée des Beaux-Arts, Brussels.