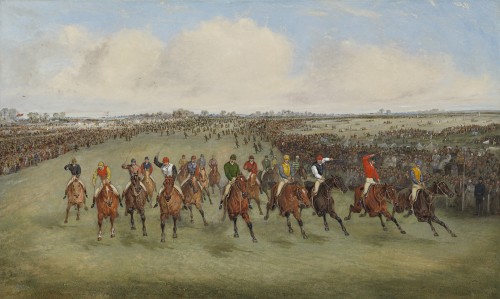 The Derby is and remains one of the most vibrant fixtures in the racing calendar. First run on the Epsom course in 1780, it was named after Edward Stanley, 12th Earl of Derby (1752-1834), a Jockey Club stalwart who owned a nearby house, The Oaks. By the nineteenth century the Derby was firmly lodged in British consciousness, fictionalized by Dickens and Disraeli and celebrated in William Powell Frith’s Derby Day, 1856-58 (Tate Britain).

Samuel Henry Alken was no stranger to Derby glamour and evoked the excitement of the race in several paintings from the 1850s to the 1870s. This painting of the 1875 Derby conjures up the field thundering towards the spectator, the 2-1 favourite, Prince Gustavus Batthyány’s bay colt Galopin, placed firmly in the centre of vision, ridden by Jack Morris in Batthyány’s green silks. Behind, the sweep of the Epsom downs is thronged with racegoers, with grand ladies watching from carriages and spectators rushing onto the track as the horses sweep past.

Galopin, foaled in 1872 by Vedette out of Flying Duchess, was bred by William Taylor Sharpe of Baumber Park, Lincolnshire. In 1873 he was bought by the Hungarian Prince Gustavus Batthyány (1803-1883), who had settled in England as a young man, a patriot unhappy with the Austrian grip on his Magyar homeland. Elected to the Jockey Club in 1859, he was an important breeder and owner of racehorses.

Trained by John Dawson (1827-1903), Galopin won five of his six starts as a two-year-old. In 1875 he won a match for 500 sovereigns against Stray Shot over the Rowley Mile by eight lengths, impressing many aficionados. In the Derby, Galopin took the lead entering the straight, followed by Remorse and Camballo. Lord Aylesford’s Claremont put in a great challenge at the distance, to which Galopin rose, winning from him by a length. Viscount Falmouth’s Remorse was third[1].

Galopin should have run as a four-year-old, but Batthyány had a weak heart and feared that the excitement of any more great victories might prove fatal for him. (He did in fact die at the Jockey Club eight years later, the day that Galopin’s son Galliard won the 2000 Guineas). Galopin was sold to Henry Chaplin for 8,000 guineas and stood at his Blankney Stud in Lincolnshire. He was Champion Sire three times and sired five Classic winners, including the 1889 Derby winner Donovan.

Samuel Henry Gordon Alken, also known as Henry Alken Jnr, was born in Ipswich, the eldest son of the leading sporting painter Henry Thomas Alken Snr (1785-1851) and his wife Maria Gordon. He spent most of his career in London. Samuel was a painter of racing, foxhunting and coaching scenes in oil and watercolour. Although he was considerably influenced by the work of his father, his pictures are generally more colourful and detailed in handling. Several prints were published after his work, including The last steeplechase held at the Hippodrome Racecourse, Kensington. He painted many of the horses in George Sala’s 60ft long panorama of the funeral procession of the Duke of Wellington in 1852. Samuel Henry Alken was living in Shadwell in 1881; he died in the Poplar workhouse in 1894.