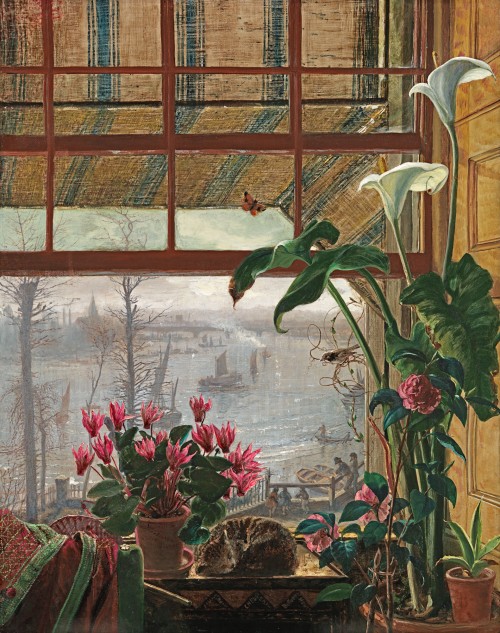 indistinctly signed, dated and inscribed on the remains of a label attached to the reverse: Chel.../ ABoyd / 1873 or 5

Private collection, UK, circa 1970s, then by descent

Possibly London, Royal Academy of Arts, Summer Exhibition, 1873, no.484, as Winter on the Thames at Chelsea

This beautiful view of the Thames seen through an open window is a rediscovered masterpiece by the Scottish artist, Pre-Raphaelite muse and Laird of Penkill Castle, Alice Boyd (1823–1897). Combining a delightfully rich, highly detailed interior with the silvery tones of a winter river scene beyond, Boyd skillfully frames and executes in this work one of her most accomplished paintings.

In the immediate foreground we are drawn into the scene by the intricate details of an embroidered coat in carmine red with green trim draped over a chair. The incredibly fine brushstrokes render each fiber and stitch, its covered button as well as the chair’s shining brass stud. Just visible behind the luxurious textile is the pleated edge of what might be a lady’s fan, its handle catching the light as it projects to the right where the artist has inscribed ‘Chelsea Bellevue House’ into the table decoration. To the right is a cyclamen, its bright flame like flowers and deep red stems standing out against the cool water beyond. Curled up next to the house plant on the golden surface of a small table is a sleeping tortoiseshell cat, its warm brown and gold striped fur connecting to the decorative wood of the interior and figures and boats below. On the far right more flowers enliven the room and frame the vista. The staked branch of a pink camelia stretches up towards the elegant stems of the arum lilies, almost the height of the canvas, while the arcing form of a small potted aloe in the bottom right corner bares the artist’s initials. Beyond the window a songbird sits on the sinuous stems of a budding clematis, while a small red butterfly hovers at the meeting of awning and sky.

In spite of the cloud-filled sky, sunshine illuminates the golden and blue-striped canopy and shutters on the right, as well as the tops of the translucent lilies and their glossy leaves. Impasted highlights on the flowers, awning and water link the two scenes. The hazy, impressionistic view of Chelsea Reach outside throws the interior into dramatic relief and contains fascinating details of its own. A variety of vessels ply this wide bend of the river, including barges and steamboats before the railway bridge. The linear silhouettes of buildings on the far bank, possibly including the steeple of St Mary’s Church, Battersea and distant chimneys, are echoed in the ships’ masts, bare trees and bankside fencing.

Alice Boyd painted this wonderful work circa 1873-75, while staying at Belle Vue House in Chelsea, with the Pre-Raphaelite artist, poet and writer, William Bell Scott (1811-1890). Scott records in his Autobiographical Notes that he met Alice on 18th March 1859[1] while he was Head of Newcastle School of Design and she and her brother Spencer were living in Tyneside with their wealthy maternal grandfather, William Losh, following the death of their mother. Alice became Scott’s pupil, model and later companion, posing for the principal figure in his Grace Darling mural at Wallington Hall, commissioned by the Trevelyan family in 1856.[2] Scott later described the relationship as ‘the perfect friendship, the ambition of my life.’[3] He visited the Boyd family castle, Penkill in Girvan, Ayrshire for the first time in July 1860 and from then on, Scott and his wife, Letitia Margery Norquoy, spent summers at Penkill while Alice joined them in London during the winter, first at Elgin Road, Notting Hill and later at 92 Cheyne Walk, Chelsea, near to Scott’s friend, Dante Gabriel Rossetti.

Spencer Boyd died suddenly of heart failure in 1865 making Alice the 15th Laird of Penkill Castle, described by Dr Jan Marsh as ‘a northern counterpart of Charleston in Sussex.’[4] Alice continued the renovations of their ancestral home started by her brother, adding a great banqueting hall designed by Scott in which they could display their pictures. She also converted part of the stable block into an artist’s studio where she and Scott worked during the summer months. Scott painted murals in the tower staircase based on The Kingis Quair, a poem by James I of Scotland, featuring Pre-Raphaelite artists and poets who visited the castle, including Christina and William Rossetti, Algernon Swinburne and William Holman Hunt.[5] The artists also collaborated beyond Penkill, Alice painting scenes inspired by William’s poems, including The Witches Ballad and Taliesin the Bard.[6] Alice also illustrated poems by Christina Rossetti for the nursery rhyme book, Sing-Song, 1872, but sadly the drawings were not used as the publishers commissioned Arthur Hughes, another friend of the artists and visitor to Penkill. A book including Alice’s designs entitled Robin’s Christmas Song was published by Routledge about the same time.[7] Despite her talent, Alice exhibited infrequently; once at the Royal Scottish Academy, Edinburgh in 1864 and once at the Royal Glasgow Institute in 1876. She exhibited two works at the Royal Academy, London, including Winter on the Thames at Chelsea in 1873, and one work with the Society of Women Artists. From the late 1870s, Alice also exhibited at the Dudley Gallery, London, the Arts Association, Newcastle, and the Bewick Club, Edinburgh.[8]

Alice painted several Thames views, including Winter on the Thames at Chelsea, a Moonlight view of the Thames in winter and a sketch of Lindsey Wharfe from Bellevue House, Chelsea at the Dick Institute, Ayrshire. The present work is most likely the painting entitled, A Window at Chelsea described in Ellen Clayton’s English Female Artists after a visit to William and Alice’s studio at Belle Vue House in November 1875: ‘Miss Boyd paints English landscape well, as her large oil picture of Chelsea Reach shows. This she calls ‘A Window at Chelsea,’ because it had as foreground an interior with various accessories. It has not yet been exhibited. She also painted ‘The Thames in Winter’ and the ‘Chapel of San Clemente, St Marc’s, Venice.’’[9] Clayton came to see Alice’s work at Scott’s request after he heard about her forthcoming book, writing to the author ‘the great lady artist is AB.’[10] Alice was at Penkill Castle at the time, but Scott described the visit to her in a letter, stating that Clayton was ‘delighted with everything, and if I will only write what I think should be said about you and your art she will be better pleased the longer it is.’[11] Scott wasn’t the only supporter of Alice’s work, Dante Gabriel Rossetti wrote that he believed her ‘to possess at least as much power in painting as any woman I know – even the best.’[12] He also sketched Alice’s portrait in profile, an etching of which Scott includes in his autobiography.[13]

Scott bought Belle Vue House, 92 Cheyne Walk, in 1870 and William Fredeman records the purchase in his essay on William’s correspondence with Alice: ‘The house, reputed to have been designed by Robert Adam, was expensive and required extensive repairs. On the day after the house was transferred, Scott wrote to Alice: Gabriel gave me the history of Chelsea, a book in two volumes, in which a good account of Bellevue house with a portrait of Mr. Hatchett who then lived in it. Gab. had bought the book in hopes of finding a flourishing account of his own house, but as there was no mention of it he was riled, and made it over to me, Bellevue being so celebrated in it (2 Oct).’[14] One of the most sought after addresses in London, Cheyne Walk had also been home to artists including Whistler and Turner. Fredeman continues, ‘When he and Alice were together in London, their entire social life revolved around the “set” which gathered usually at Bellevue House, at 16 Cheyne Walk, or at either Ford Madox Brown’s or G.P. Boyce’s.’[15]

[2] Scott also painted Alice in Una and the Lion, 1860 (National Galleries, Scotland), The Border Widow, RA 1861 (Aberdeen Art Gallery & Museums), as well as a portrait of Alice with her brother Spencer on the top of Penkill Castle tower (private collection).

[4] Cited in Marcus Binney, ‘Pre-Raphaelites’ castle seeks £1m saviour’, The Times, 11th August 1992. She continues, ‘The Pre-Raphaelites painted seriously at Penkill, but embellished it for fun.’

[6] Ellen C Clayton, ‘The most important picture yet done by Miss Boyd represents Talieson the Bard... This work was not very well placed at the Dudley, but received favorable attention from the critics.’ English Female Artists, Tinsley Brothers, London, 1876, Vol.II, pp.37-41.