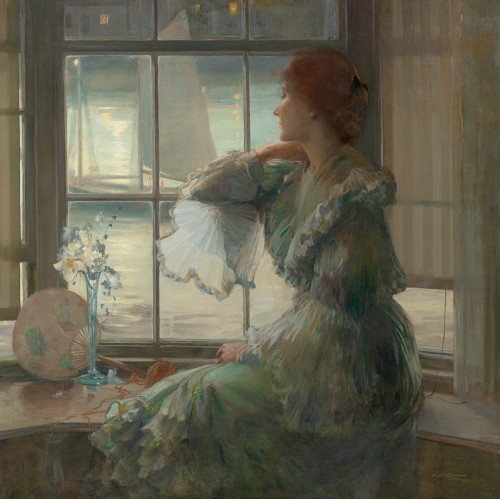 In its original English swept and gilded composition frame

Miss Boag-Thomson, Edinburgh, 1960, acquired from the above and then by descent

London, Agnew’s, Independent British Art, 1906, as At the window, moonrise

This captivating painting belongs to a series of lyrical, contemplative works by the Edinburgh artist Robert Burns depicting women waiting and watching in shaded interiors before the light of a large, central window. As a lover of romantic poetry, in particular Scots ballads, Burn’s cycle was likely inspired by his illustration of the celebrated Ballad of Sir Patrick Spens, ‘O lang, lang may the ladyes sit’, exhibited at the Royal Scottish Academy, Edinburgh in 1902, which includes the profile of a beautiful red-haired maiden gazing mournfully out to sea as she waits for the ill-fated return of a ship from Norway.[1] Painted four years later, ‘And she: she watched the square like a book’, inspired by The Statue and the Bust by Robert Browning, portrays our auburn-haired heroine seated in the identical pose as the present work (though turned slightly towards the viewer) and wearing the same elaborate, opalescent peignoir, while looking out upon a Florentine setting appropriate to the poem.[2]

The series culminated in Adieu (Schubert), exhibited at the RSA in 1908 (the same year that The window seat was shown at the Carnegie Institute in Pittsburgh) and purchased from there by the Walker Art Gallery, Liverpool. Burns later revisted the genre in ‘My love’s in Germanie’, exhibited at the RSA in 1915 and based on the poem of the same title by Hector MacNeil.[3]

Painted two years before Adieu and in the same year as ‘And she: she watched the square like a book’, The window seat portrays the same pensive, Celtic model and air of romantic expectation in a modern scene unencumbered by literary or musical narrative.[4] The subject of the woman’s wistful thoughts remains unseen and is not referred to in the title, instead the window seat itself provides the subject and structure for the composition, filled with the luminous light of the moon and an opulent assortment of decorative detail. The reflective occupant of the window seat rests against the central six-paned sash of a bay window gazing at the passing Yawl which glides across the shimmering, moonlit water. The beautiful, translucent pleats of her elegant, softly clinging tea-gown echo the yellow, grey, blue and green ripples of the water exquisitely, flowing in delicate undulating layers to form bright, scumbled peaks and shaded pools of iridescent fabric. The cool, elegant colour harmony is also repeated in the fluted glass vase of flowers to the woman’s left, the bright, golden centre drawing our attention like the twinkling lights across the water. Behind and beneath the flowers rests a Japanese fan whose vibrant green and orange pattern reiterates the colours found in the woman’s dress, flesh tones and burnt umber hair, a key note also captured in the unravelling ball of wool.

Burns discovered Japanese art while studying in Paris in the early 1890s and its decorative quality of line had an immediate impact on his work.[5] Like Natura Naturans, 1891, his archetypal illustration for Patrick Geddes’ Celtic Revival journal Evergreen, The window seat fluently unites the central female figure with the water which surrounds her, in this instance the woman’s dress, rather than her hair, emulating the sinuous stream. Burns was one of the first Scottish arists to combine oriental design and the dynamism of art nouveau with his own Glasgow style and was uniquely placed to do so, as an illustrator for journals such as Ver Sacrum, the official magazine of the Vienna Secession, and an exhibitor at international exhibitions in Munich and Vienna[6]. James Abbott McNeil Whistler, also fascinated by Japanese art, was another imporant influence, whose Symphony in White, No. 2: The Little White Girl, 1864 (Tate Britain), depicts a beautiful woman (his red-haired mistress, Joanna Hiffernan) in a state of poignant reverie. Although standing before a mirror, Whistler paints her reflection  silhouetted against a seascape in a composition equally composed according to colour harmony and enlivened by the strategic placement of a Japanese fan.

While in Paris, Burns also had the opportunity to admire the Italian colourists Titian and Giorgione in the Louvre, which can also be seen to inform his refined and carefully balanced paintings

in composition and use of colour, as James Caw recounts: ‘Influenced in his earlier designs by certain of the earlier Florentines, as is evident in some of his windows, his pictures retain traces of

that admiration or are reminiscent of that langourous mood, the dolce far niente, which breathes in Giorgione’s ‘Pastoral Symphony’….charming in tone and pleasing in rhythmic design of mass and colour..’[7]

In his review of Agnew’s Independent British Art exhibition of 1906, E. G. Halton praised this exceptional work in The Studio as: ‘…a successful attempt to realise the mystery and beauty of the gloaming, rendered even more elusive by the rising mists.’[8]

In a book entitled The Cult of Chiffon (1902) we read: ‘There is much affinity between a beautiful tea-gown....and a love of art and poetry’; such a gown ought to be ‘a garment of mystery’, reflecting the character of the wearer’.[9] And, suitably in accordance with the romantic lyricism of this painting, is a beautiful woman, her rich auburn hair tied up with a small black velvet bow, and wearing a tea-gown of finely pleated sea-green chiffon over light green silk. The dress matches in spirit the aesthetic interior in the painting with its Japanese painted fan and delicate vase of flowers.

Tea-gowns had appeared in the last quarter of the nineteenth century, graceful and loosely-fitting dresses in which women could relax at five o’clock tea, an interval between the corseted rigours of formal daytime and evening fashion. Although informal, tea-gowns were luxury items, made of

costly fabrics, and this was the speciality, in the Edwardian period, of the designer Lucile (Lucy Duff Gordon), whose confections of ruffled silks, lace and embroidery in soft sweet-pea colours, were promoted by her talent for hyperbole recorded in her memoirs. As – ‘I was the first dressmaker to bring joy and romance into clothes’,[10] all of which ‘gowns of emotion’ (intended to be seen at their best in twilight or candlelight) were given titles; in the autumn 1905 collection, for example, were listed: ‘The tender grace of a day that is dead’, ‘Illusion’, ‘The sweetness of youth’, ‘Unforgotten’,

and so on.[11] Yet, after the First World War, teagowns fell from fashion, not suited to plainer styles of dress with short skirts, and the House of Lucile disappeared.

The son of an early landscape photographer, Archibald Burns, Robert was born and brought up in Rock House, Edinburgh, previously the studio of the artist David Octavius Hill (1802-1870).

Tragically, both his parents died before he reached the age of sixteen, at which time he moved to live with his grandfather in Glasgow. A talented draughtsman, Burns was awarded a drawing prize at Glasgow Technical College while studying to be an engineer during the day. In the evenings, he attended Glasgow School of Art along with Charles Rennie Mackintosh. In 1889 he left Glasgow for London and briefly enrolled as a student at Professor Fred Brown’s School, Westminster before travelling to Paris the same year to study at the Académie Delécluse.  He also married fellow Glasgow School of Art student, Catherine Craig in 1889. In Paris, Burns discovered Japanese art and purchased a large collection of prints which had an immediate impact on his work.[12] He also spent time studying works by Titian and Giorgione in the Louvre which would later inform his romantic paintings of Scots ballads. Burns superbly combined the influence of Japonisme with his Glasgow style to create one of the earliest examples of Art Nouveau in Scotland in his illustration, Natura Naturans, 1891, published in Sir Patrick Geddes journal The Evergreen. He also contributed to Ver Sacrum, the journal of the Vienna Secession.

Burns returned to Edinburgh in 1892 and started to exhibit at the Scottish Academy. In 1901 he was elected President of the Society of Scottish Artists and an Associate member of the Royal Scottish Academy the following year (although he resigned in 1920). Burns taught colour for seven years at the Academy Schools, but, as demonstrated by his resignation, felt a much stronger affinity for the Society of Scottish Artists, which exhibited applied art in addition to painting. Burns designed most of the advertising for the Society as well as the cover of their catalogue. He became the first Head of Drawing and Painting at Edinburgh College of Art from 1908-1919 and proved an influential teacher, his students including Anne Redpath (1895-1965). Burns frequently visited the artistic community in Kirkcudbright and encouraged other artists to paint and settle there. From 1920 landscape painting became a prevailing interest with views of Kirkcudbright and Iona in oil and more than seventy watercolours following a three month trip to Morocco in 1921, which Burns exhibited at the Leicester Galleries, London, upon his return.

During the last twenty years of his life, Burns returned with passion to applied art, having already produced designs for iron and silversmiths’ works, stained glass windows such as the Presentation in the Temple at St Mary, Bellevue Crescent and murals at St David’s Roman Catholic Church at Dalkeith and Darling’s Shop in Edinburgh (now demolished). Perhaps his most famous designs were for Crawford’s Tea Rooms in Princes Street, Edinburgh.[13] Burns had already worked as a label designer for the Liverpool biscuit manufacturer, William Crawford, when the firm commissioned him to design and organise the interiors of their Edinburgh restaurant on Princes and Hanover Streets, from decorative panels to cake stands. Burns even designed furniture made by the celebrated firm Whytock and Reid. The project was a huge public and critical success when completed in 1927.

Burns suffered a series of strokes from 1929 and was confined to bed, but continued to work designing illustrations in colour and black and white, which with the help of his friend the publisher, Alexander Hunter Crawford, became four books, two of which were published: The House that Jack Built, 1937 and Scots Ballads by Robert Burns, Limner, 1939, the latter highly praised by fellow artists George Clausen and his friend Stanley Cursiter.

The work of Robert Burns is represented in the Scottish National Gallery, the City of Edinburgh Council and the Royal Scottish Academy of Art & Architecture, Edinburgh as well as the Walker Art Gallery, National Museums Liverpool.

[1] Private collection. First recorded in the 18th century, the ballad is thought to tell the 13th century tale of Alexander III of Scotland requesting Sir Patrick Spens to escort his daughter Margaret to Norway for her marriage to King Eric. On the return journey his daughter and many nobles drowned.

[2] Exhibited at the RSA, Edinburgh, in 1906 and purchased by the Neue Pinakothek, Munich the following year. Private collection. Robert Browning, The Statue and the Bust, 1855, imagines a story of thwarted love between the Grand Duke of Tuscany, Ferdinand de Medici (1549-1608) and a Florentine lady engaged to a member of the Riccardi family, inspired by the bronze equestrian statue by Giambologna in the Piazza della Santissima Annunziata, Florence which gazes at a fictional bust by Della Robbia on the corner of Palazzo Budini Gattai.

[4] Though the identity of Burns’ model is unknown, she bears a strong resemblance to Helen Urquhart, a student of his at Edinburgh College of Art and photographed with him in 1910 (image, Aberdeen Art Gallery).

[6] Ibid. Forrest suggests that Burns series was influenced by his knowledge of the Austrian and Belgian Symbolists.

[13] The oil on tempera mural Diana and her Nymphs is in the Scottish National Gallery, Edinburgh. Nine oil on board panels are on long term loan to the RSA, Royal Scottish Academy of Art & Architecture, Edinburgh. 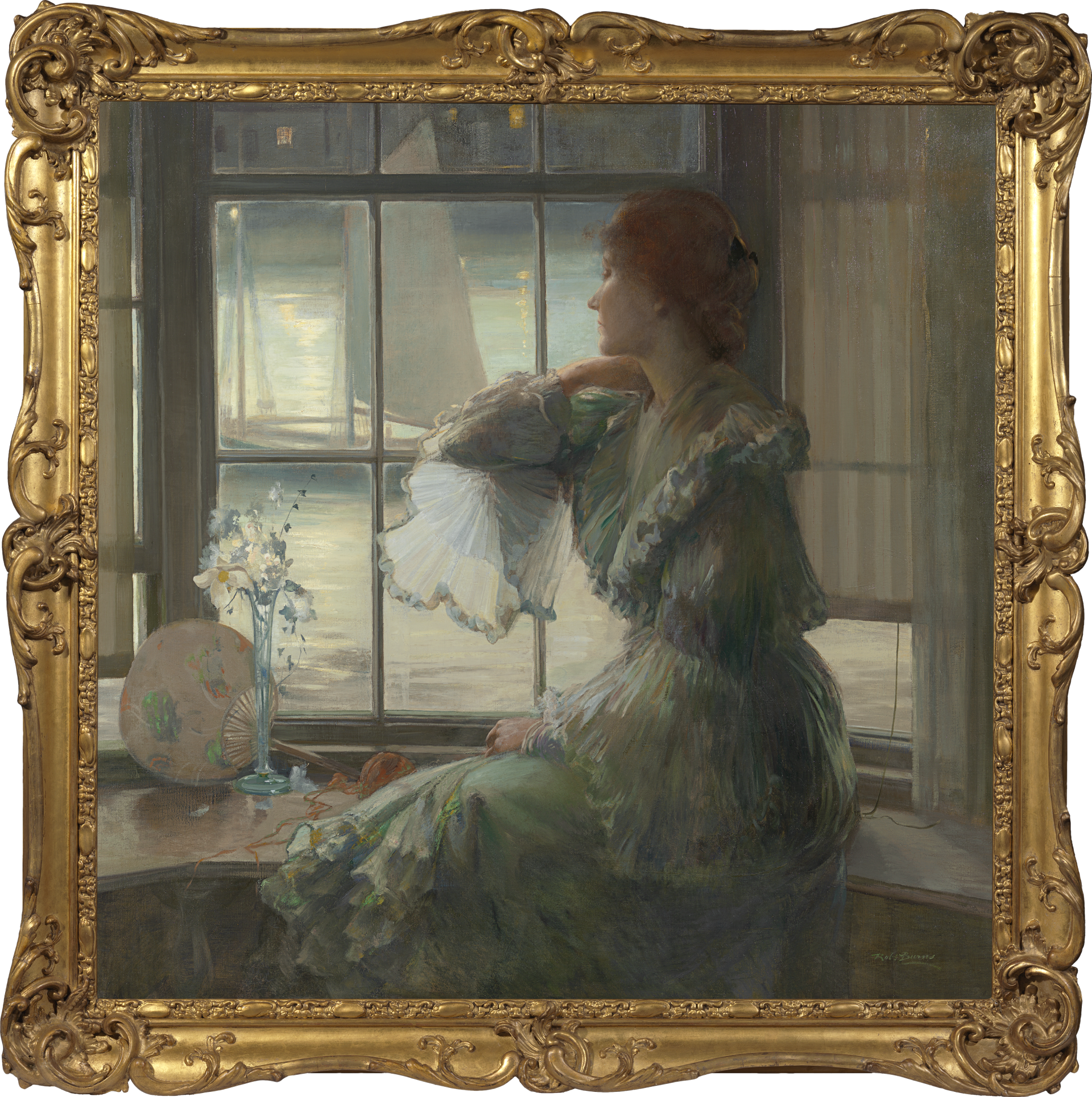