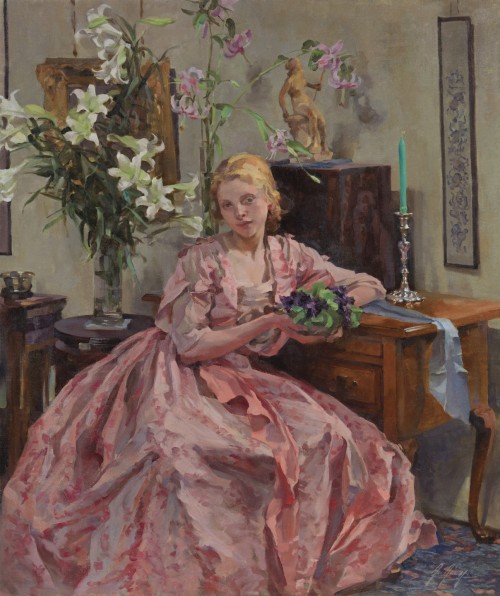 In a Whistler style gilded frame

The artist, then by descent

Glasgow, Institute of Fine Arts and the Art Institute, Paisley, 1938

As spring looks towards summer, Young April [1]celebrates the season surrounded by flourishing pink and white lilies and a bountiful posy of violets. The delicate pink tones of her elaborate, full-skirted dress echo her blushing complexion, as well as the curved petals of the stargazer lily, each evoking freshness and immediacy. Combining figurative and floral subjects within a detailed domestic interior full of fine and decorative art, Airy’s Young April is a tour de force of the artist’s compositional complexity and bold impressionistic application of paint. As early as 1915, The Burlington Magazine declared Miss Airy ‘the most accomplished artist of which her sex can boast in this country’ admiring, in particular, her ‘delicate nature and flower studies conceived in the manner of Dürer would have delighted the heart and eye of Ruskin.’[2]

Anna Airy was a painter of figure subjects, portraits and still life. An extremely versatile artist, she worked in a wide range of media including oil, watercolour and pastel, and was also an accomplished etcher. She married Geoffrey Buckingham Pocock, an artist in his own right. Born in London, she studied at the Slade School of Art from 1899-1903 under Frederick Brown, Philip Wilson Steer, Henry Tonks and Sir Walter Russell, her contemporaries including William Orpen and Augustus John. She won the Slade Scholarship in 1902 and the Melville Nettleship Prize for three consecutive years in 1900, 1901 and 1902.

In 1917 Airy was commissioned to produce an art work for the Canadian War Memorials Fund Committee, the finished painting, Cook-house at Witley Camp, depicting soldiers of the 156th Canadian Infantry Battalion. During the First World War she was appointed an official war artist, the most challenging and prestigious work she had yet undertaken, and commissioned in June 1918 by the Munitions sub-committee of the Imperial War Museum to paint four large canvases highlighting a key area of British arms manufacture.[3] The commission was to represent a number of factories including, the National Projectile Factory, Hackney (IWM:ART 4032), the National Filling Factory, Chilwell, Nottingham, WG Armstrong Whitworth’s at Nottingham (IWM:ART 2272) and the Aircraft Manufacturing Co. at Hendon (IWM:ART 1931). The final four didn’t include Chilwell Factory, but the Singer Factory in Glasgow instead (IWM:Art 2271). A painting of the South Metropolitan Gas Co (IWM:ART 2852) was also commissioned by the Women’s Work Section.

Airy exhibited at many institutions both at home and abroad and became internationally known. She exhibited at the Royal Academy from 1905-1956, the Paris Salon and international exhibitions in Rome, Venice, Canada and the United States of America. For much of her life, Airy lived on Haverstock Hill in Hampstead, and later moved to Playford in 1933, near Ipswich. She was elected President of the Ipswich Art Club in 1945, a post she held for nineteen years, and was Vice-President of the Artists’ General Benevolent Institution. She taught at Ipswich School of Art. Her work was frequently reproduced in The Studio and Colour, and she was the author of The Art of Pastel and Making a Start in Art.

In memory of her concern for young artists, the Anna Airy Award was established following her death in 1964, an art fund and competition held by Ipswich Art Club to promote young and emerging talent and continues to this day at the Ipswich Arts Society and the University of Suffolk.

Anna Airy’s work is represented in many public collections including the Imperial War Museum, the National Gallery of New South Wales, the Walker Art Gallery, Liverpool, and the Victoria & Albert Museum, London.

[1] Young April is also the title of a silent romantic comedy made in 1926, directed by Donald Crisp and produced by Cecille B De Mille.

[3] Inside the First World War Series, The Telegraph, 1st November 2013