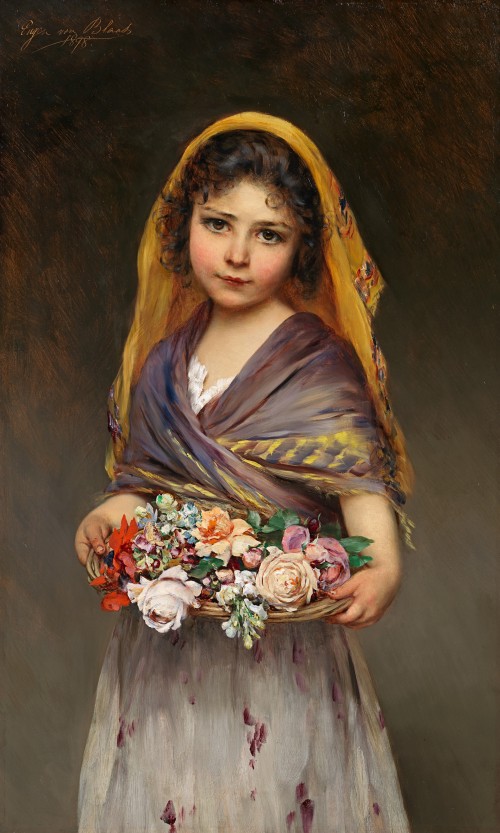 Young girl with a basket of flowers

Young girl with a basket of flowers

Eugen von Blaas captured the everyday lives of humble Venetians amid ancient courtyards and narrow calle.  As Thomas Wassibauer comments, ‘He contrasted the decaying grandeur of old Venetian stone with…young people…his young people live their lives within the old walls of a still-important city, and become links in an apparently endless chain of generations who carry on the Venetian traditions and the way of life’.

Von Blaas lived in Venice most of his life and the rich colour and dazzling impasto of painters like Titian and Tintoretto seeped into his own art. In this work, the purple of the young girl’s shawl, her yellow head covering and basket of flowers are painted with great brio. Throughout the nineteenth century, the magic and mystery of Venice attracted celebrated tourists, among them John Ruskin, Richard Wagner and Henry James. Venice’s indigenous inhabitants lived their own separate and secret lives, rich in their own traditions, the beauty of the women and children part of the city’s fascination.

Eugen von Blaas was born in Italy, of Austrian parents, at a time when northern Italy was ruled by Austria. His father, Carl von Blaas (1815-1894), was a leading history, portrait and fresco painter. The family lived in Rome, Albano and Venice before Carl returned to Vienna to take up a post at the Akademie der Bildenden Künste in 1851. He returned to Venice in 1856 to teach at the Venetian Academy, a post which Eugen later held.

Eugen studied with his father and spent the rest of his career in Venice, with trips to Austria from 1860 to 1872 to assist Carl on fresco paintings for the Vienna Arsenal. So successful were these that in 1877 Emperor Franz Joseph I elevated Carl to the status of hereditary nobility. In 1870 Eugen married Paola Prina, daughter of a north Italian aristocrat and possessed of a considerable fortune. The couple lived a fashionable life and owned a palazzo on the Zattere and a country villa.

Eugen painted portraits and genre scenes of Venetian life, depicting attractive young people gathering in the venerable stone campi to sing, play music, flirt and sew. From the 1880s he concentrated more on single pictures of young women, often street vendors or going about their domestic tasks in picturesque local dress. These are frequently painted on panel, with dazzling, rapid brushwork.

Eugen von Blaas had an international exhibiting career. He was a regular contributor to the Esposizione Nationale in Venice and the Jubilaums Austellungs held in Vienna and Munich. He also showed his paintings at the Royal Academy, the Grafton Gallery and the New Gallery in London between 1875 and 1892. Von Blaas died in Venice in 1932.