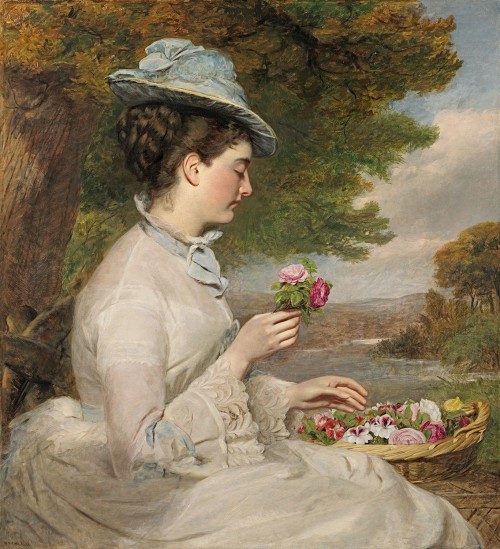 William Powell Frith was best known for his historical genre paintings and his richly detailed glimpses of contemporary Victorian life.  Painted at the peak of his career, Flowers was one of eight pictures Frith exhibited at the Royal Academy of 1875, writing ‘it requires a genius of a Reynolds or a Gainsborough to produce eight works in one year that shall be, one and all, worthy of public scrutiny.’[1]

Sitting before a meandering river landscape, a beautiful young woman holds two shrub roses of pale and deep pink, their hues complimenting the model’s blushing complexion. Her left hand hovers above a basket of blooms resting beside her on a wooden bench, ready to select the next flower for her natural bouquet. The woman’s dress, also in harmony with her natural surroundings, echoes the bright blue sky and white clouds glimpsed to the right beyond the trees.

Frith painted several pictures of attractive young women in fashionable dress from the mid-1850s and excelled at the delicate delineation of texture and detail. Here Frith’s subject models a high-collared and ruffed floral-white day dress, polonaise in style, complemented by a series of light, celestial blue adornments: a tiered bow at her neck, a sash around her waist and a series of flounced ribbons that decorate the wide span of her sleeves. The bell-shaped sleeves are embellished with an intricate edging of swirled, leaf-like lace patterning and this use of lace is repeated in the delicate capped shoulder of the bodice elegantly concealed beneath.

It was fashionable for daytime dresses to be cut with a lower, more angular neckline in the 1870s; however, this trend has been met and adapted in the current design, with a unique, sheer chiffon or fine muslin overlay that veils the sitter’s part-exposed shoulders. Importantly, these more inventive and revealing necklines slowly became more prominent throughout the decade, leading to a trend in velvet chokers, jet pendants and cravat-like ruffles; as shown in the present work. It was also incredibly popular within the dress codes of high society for young women to dress their hair at the back with complicated twists and rolls. Hats were therefore made smaller to accommodate intricate displays of braiding and titled forward to the forehead; once they acquired a wider brim, they became known as ‘picture hats.’

Frith had not been keen to become an artist, but his parents insisted upon him pursuing his talents.  He studied at Sass's Academy and the Royal Academy Schools. He exhibited at the Royal Academy for sixty years. He was elected associate in 1845 and was made a member in 1852.  He also showed at the Royal Society of Artists, Suffolk Street and the British Institution.

Frith was friends with the group of artists known as The Clique, Richard Dadd, Augustus Leopold Egg and Henry Nelson O'Neill. In his youth, Frith was most drawn to portraying scenes from literature. He shifted from portrayal of scenes from Shakespeare, Scott and Sterne to the portrayal of modern life at the same moment as the blossoming of Pre-Raphaelitism. His first great success in the genre was Ramsgate Sands of 1854, which was heralded as an excellent panorama of Victorian life and was purchased by Queen Victoria. His other great triumphs in this panoramic manner were Derby day of 1858, The Railway Station of 1862, The Salon d'Or, Homburg of 1871 and A Private View of the Royal Academy of 1883. He also painted several moralistic series such as The Road to Ruin of 1878 and The race for Wealth of 1880.

Many of Frith's Royal Academy successes were purchased or bequeath to eminent museum collections including the Victoria and Albert Museum. Derby Day is one of the Tate Gallery's most popular exhibits and the Aberdeen Art Gallery holds a self-portrait. 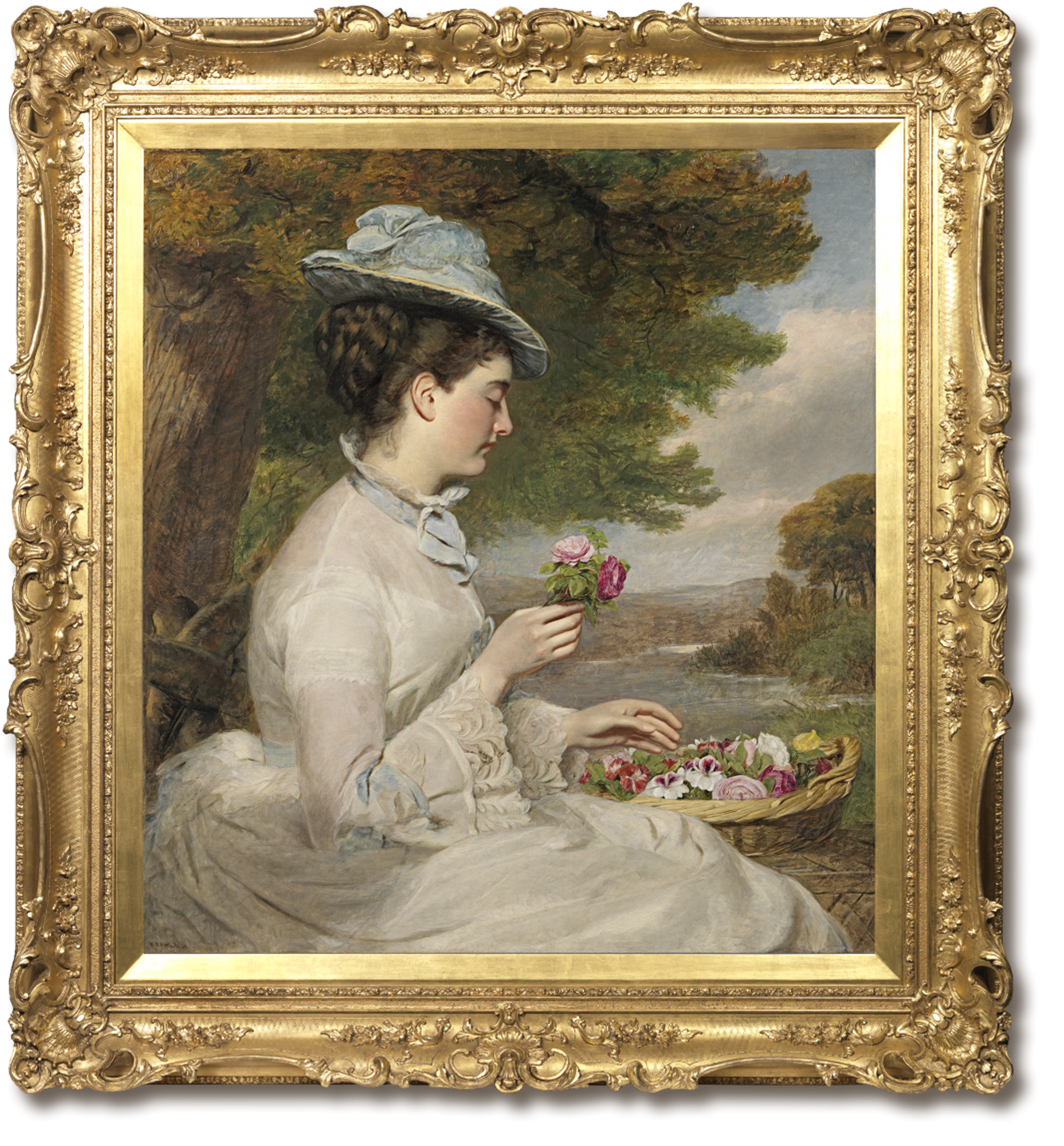