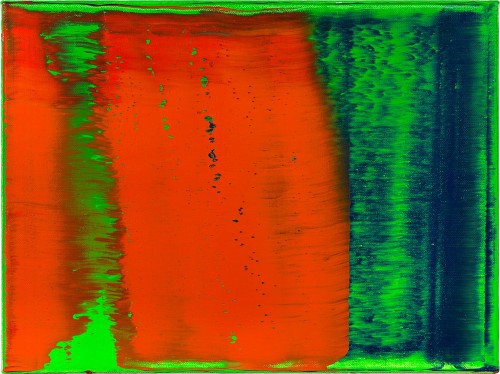 painting vibrant Abstract pictures in 1976 and is still fascinated by their creation, which he

likens to ‘a force of nature’. Grün- Blau- Rot was created in 1993 in collaboration with the Swiss art journal, Parkett, as a series of 115 individual oil paintings on canvas applied in smooth, wet layers with a squeegee. The title, Green-Blue-Red, documents the three colours used and the order in which the pigments were applied to the canvases. The importance of chance is central to this regimented three-colour sequence, which documents a skilful interplay of opposing colours, action and erasure, chance and intention. During an interview with Sabine Schutz in 1990, Richter commented of his abstract paintings: “I don’t have a specific picture in my mind’s eye. I want to end up with a picture that I haven’t planned. This method of arbitrary choice, chance, inspiration and destruction may produce a specific type of picture, but it never produces a predetermined picture’.[1]

Richter began using a squeegee, a long, narrow plastic strip to draw paint across the canvas rendering the application unpredictable, from the late 1970s and from the late 1980s his abstract paintings were created almost exclusively with it. As well as effecting the random and

varied behaviour of the paint, sometimes forming thin, smooth layers, overlapping, blending, sometimes torn into stippled patches on the surface, the squeegee technique also creates the optical impression or illusion of space and depth which confounds the actual order of application. For Hubertus Butin, ‘Because the perceived spatial location contradicts the actual order of the colours, the work eludes the search for rules and comprehension’.[2] Butin considers the series a ‘considered approach to the paradigm of abstract painting that led to an independent artistic practice…This work is, in terms of its conception, an autonomous abstract painting that represents no reality outside of the painting – nothing figurative, nothing spiritual, and nothing subject-oriented – but instead results entirely from the obviousness of its immanent, purely formal structure’.[3]

Gerhard Richter was born in Dresden in 1932. He studied at the Dresden Art Academy in East Germany from 1951-56. A few months before the creation of the Berlin Wall, Richter and his first wife Ema fled to Düsseldorf in West Germany. From 1961-64, Richter studied at the Staatliche Kunstakademie, Düsseldorf under Karl Otto Gotz.

Richter met and worked with fellow artists Georg Baselitz, Sigmar Polke and Konrad Fischer-Lueg during the 1960s, forming a group with Polke and Fisher-Lueg called the Capitalist Realists. Richter’s first one-man exhibition was held at Mobelhaus Berges, Düsseldorf in 1963, showing his photo-based painting style for the first time.

In 1967 Richter won the Junger Westen Prize and began to paint series of Colour Charts, Grey Paintings and Portraits. In 1972 he represented Germany at the Venice Biennale and exhibited at Documenta in Kassel, where he also exhibited in 1977, 1982 and 1987. At Documenta in 1982 he was awarded the Arnold Bode Prize and in 1985 in Vienna the Oskar Kokoschka Prize.

The artist first exhibited in the USA in 1973 at the Reinhard Onnasch Gallery. In 1988 the Art Gallery of Ontario, Toronto and The Museum of Contemporary Art, Chicago held a retrospective of his work. This was followed by a retrospective of Richter’s paintings in 2001 at the Museum of Modern Art, New York, curated by Robert Storr.

Richter designed a new stained glass window for the Cologne Cathedral in 2007 (the original was destroyed during WWII) and was made an honorary citizen of Cologne. He has lived and worked there since the early 1980s.