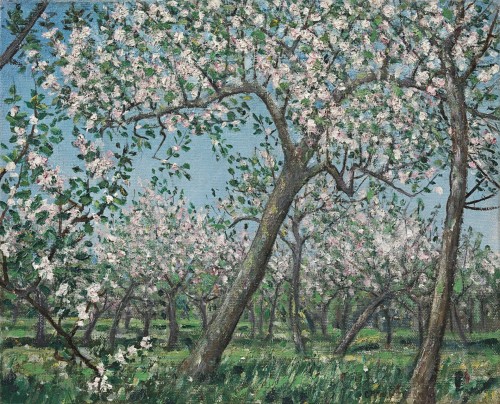 The Apple Orchard - The Bath Road

The Apple Orchard - The Bath Road

Signed lower right: CRW Nevinson; inscribed with the title on the artist’s label attached to the reverse: ‘The Apple Orchard - / The Bath Road’

Allen & Beryl Freer, Cheshire, acquired from the above

Nevinson’s landscapes are some of his most appealing paintings, and this depiction of an apple orchard in bloom is particularly enchanting. In his Impressionistic rendering of this intricately woven orchard, where springtime blossoms delicately adorn each outstretched branch; Nevinson looks back to the work he produced in the early 1910s while a student at The Slade School of Fine Art. In this painting, over a decade later, he revisits landscape painting with vigour. It is noted that many of his best landscapes date from 1925-30, of which The Apple Orchard - The Bath Road is an excellent example.

Nevinson returned to landscapes after 1917. The artist had been given an honourable, medical discharge from the army in 1916 after having fallen seriously ill from rheumatic fever. A welcome antidote to his wartime pictures with their ethos of ‘there is no beauty except in strife, and no masterpiece without aggressiveness’, Nevinson’s landscapes show the gentle side of peacetime rurality as well as a more contemplative side to his personality, and they proved quite popular.[1] As Osbert Sitwell observed in 1947: ‘Nevinson painted with his heart, no less than with head and hand.’[2] It is likely that the present work was painted from Nevinson’s mobile studio, a specially adapted motor caravan he drove around the countryside attracting much attention in his typically flamboyant fashion. The Apple Orchard is a painting coloured by Nevinson’s post-war reflection, the soft, pink-speckled blossoms symbolic of his painterly recuperation.

Christopher Richard Wynne Nevinson’s fame rests primarily on the pictures he executed in his capacity as an Official War Artist during the First World War. He was also a painter of landscapes, domestic interiors, portraits and flower studies, and was an accomplished etcher and engraver.

He trained at the St. John’s Wood School, The Slade, and then went to Paris where he shared a studio with Modigliani and continued his studies at the Academie Julian and the Cercle Russe.  Prior to 1914, Nevinson’s talent developed rapidly as he moved from Post-Impressionism to Futurism, being a close friend of the leading Futurist Marinetti and contributing illustrations to the Vorticist’s journal ‘Blast’.

With the outbreak of the First World War, Nevinson enlisted as an ambulance driver attached to the French Army and served with the R.A.M.C. The paintings, drawings and prints he made from his battlefield notes brought him recognition and he became one of the first Official War Artists. When the war ended, he resumed the subject matter of his former years, depicting scenes of London and Paris, including street life, café society, urban landscapes and industrial canals.  He exhibited with the New English Art Club, the Friday Club, the Allied Artist’s Association, was a founder member of the London Group in 1913, and held his first one-man show of war paintings at the Leicester Galleries in 1916.

Nevinson went to New York in 1919 and was inspired by the architecture of Manhattan, appreciating the sky-scrapers both for their dramatic beauty and as symbols of a new age. From the mid-1920s English landscapes succeeded the skyscrapers as his primary subject matter and he built a mobile studio for painting expeditions.

By the early 1930s, Nevinson had begun to paint monumental composite images to express his views about the world. He published his autobiography ‘Paint and Prejudice’ in 1937 and when the Second World War broke out, he returned to painting war subjects up until his death in 1946.