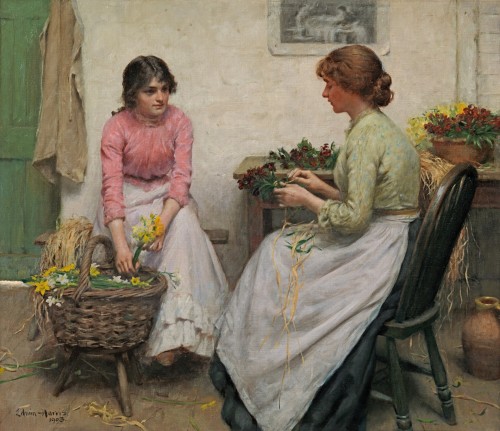 Birmingham Society of Artists, then by descent

A charming example of Edwin Harris’s cottage interiors, Spring flowers is a light, fresh rural genre scene depicting two young women in bright pink and cool green pastel-coloured blouses preparing bouquets of daffodils and possibly sweet peas to sell. The dark, rustic furniture is beautifully balanced by the sunlit, white-washed walls and the women’s aprons, heightened by the fresh green of spring foliage found across the canvas from the cottage door to the basket full of cut, collected flowers to their more formal arrangement on the table to the right. Despite being a scene of labour, there is no hardship here, only peaceful productivity, light and beauty.

Edwin Harris was endowed with an innate ability to appreciate the simple poetic sentiment of ordinary, genre scenes. The portrayal of a pretty girl seated in a cottage interior was a subject which Harris frequently painted, and for which he became known as the 'master of the window-seat scene'.

Born in Ladywood, Birmingham, Harris attended the Old Edgbaston School, where he formed a lifelong friendship with the artist, William A. Breakespeare.  He entered the Birmingham School of Art at the age of fourteen, and after finishing his studies, he became an assistant master for two years. He also had his own studio where he taught private pupils.

In 1880, Harris went to study at Verlat’s Academy in Antwerp. There, he became friendly with William John Wainwright and Frank Bramley, and was joined by Breakespeare the following year.  He returned to Birmingham in 1881 and took a studio in Paradise Street.  It was here that the first meeting was held that led to the formation of the Birmingham Art Circle. During the same year, he and Breakespeare visited Brittany and Newlyn for the first time, and Harris spent the following summer at Pont-Aven, where he stayed at the Hotel des Voyageurs with many fellow artists.

It was not until 1883 that Harris settled in Newlyn where he stayed for the following twelve years.   His wife died in tragic circumstances in 1887 and left him with one young son. Harris left Newlyn in 1895 and spent the next three years in Cardiff, Newport and Bristol. He finally returned to Birmingham in 1898, moving to Sycamore Cottage, Cleve Prior near Evesham, Worcestershire in 1901 with his second wife Sally and their daughter Dorothy.

During the latter part of his career, he devoted himself almost entirely to portraiture. Harris exhibited regularly at Birmingham and was elected a member of the Royal Birmingham Society of Artists in 1885. He also exhibited at the Royal Academy, London, Leeds Art Gallery, Liverpool, Manchester, Nottingham and Newlyn. 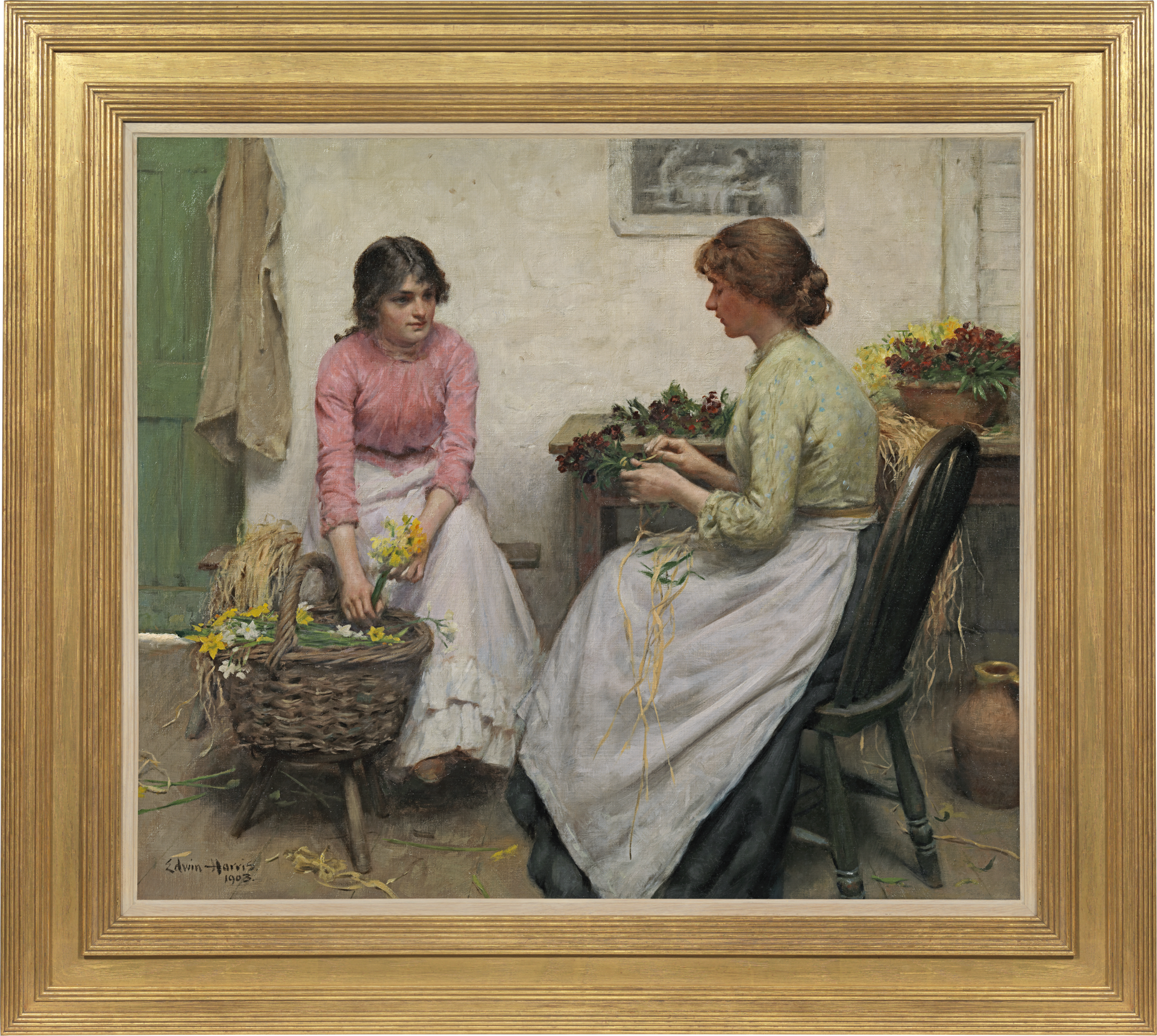