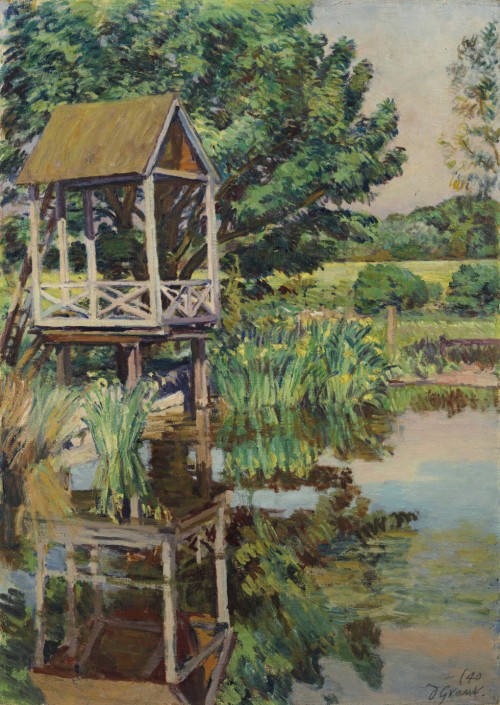 East Sussex, Firle, Lewes, Charleston, 18th May- 18th October 2018, hanging in Maynard Keyne’s (later Quentin Bell’s) bedroom, which has a view of the garden and pond

Virginia Woolf, Moments of Being, London, 1976, illus. on the front cover

When Duncan Grant and Vanessa Bell moved to Charleston, a rented farmhouse in the Sussex Downs, a hundred years ago this year, its outdoor attractions included a spacious walled garden and a large farm pond in front of the house. As Charleston became a regular country retreat, the artists set about cultivating and ornamenting the garden. The pond was not neglected - waterlilies and irises were introduced and eventually sculpture appeared around its edge. Most of these outdoor additions were the ideas of Duncan Grant. He acquired the classical plaster-cast heads that line one of the garden’s walls and he supervised two mosaic pavements. But his most ambitious project was undoubtedly the erecting on stilts of a gazebo at the edge of the pond. It is this that forms the subject of this painting, which seems to be its only visual record.

The gazebo’s origins were in a hut on a platform which revolved to catch the sun and stood in the nearby orchard. Some years later, the hut was moved onto the wooden structure seen here. Finally the old hut decayed and it was then that Grant built another (seen here) which, according to Vanessa Bell’s son, Quentin Bell, was ‘decorated in the Chinese manner; it was adorned with brilliant colours and arresting designs. It looked very fine indeed’. The decorations were probably on canvas, tacked to the three sides of the structure. This lasted for the summer of 1940 when Grant painted this work, catching the scene before an autumn gale that year brought the whole thing down; it was not rebuilt.

The early summer of 1940 saw the rapid advance of German forces through France towards the English Channel,  as well as much bomb damage in London (including the complete destruction of Duncan Grant’s and Vanessa Bell’s adjoining studios in Fitzroy Street). It was a time of great anxiety for all but felt especially by those living along the south coast. Charleston was almost directly below the enemy’s flight path. Virginia Woolf’s diary for May 1940 in particular vividly records the strain, her house only a few miles from Charleston. It was during these despairing months that Grant, more or less confined to Charleston, painted several local landscapes which seem to celebrate the English countryside (e.g. The Hayrick, 1940, Tate). We can certainly include The Gazebo at Charleston in this group of works, with its full-leafed trees, flowering yellow flags and the sunlit view across the fields. It is in Grant’s most lush, painterly style, the image given increased richness by the reflections in the water.

The previous owner of the painting was the poet, writer and editor, John Lehmann (1907-87), a visitor to Charleston in the 1930s and manager of Leonard and Virginia Woolf’s publishing firm The Hogarth Press.

We are grateful to Richard Shone for writing this information sheet.

Other Works By
Duncan Grant: 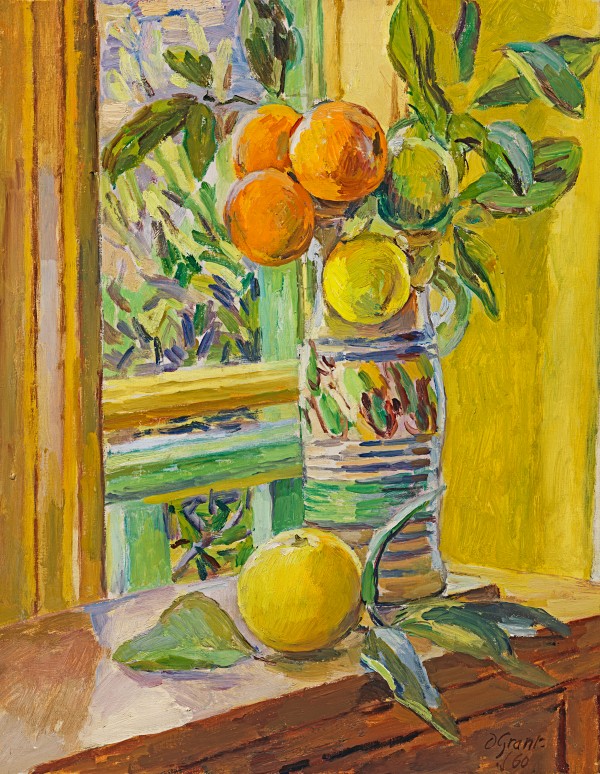