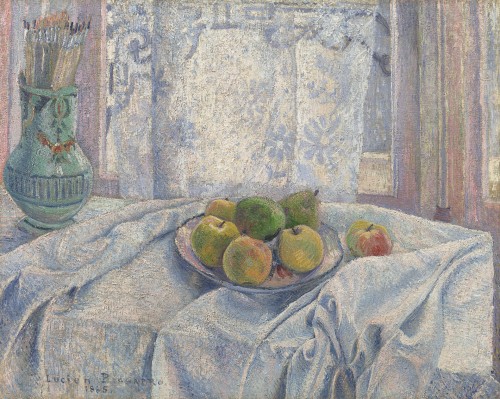 Apples on a tablecloth against a lace-curtained window

Apples on a tablecloth against a lace-curtained window

The artist and by family descent until 1963;

by whom sold to M Herrera, South America, July 1987 (label on the reverse)

Recorded in John Bensusan-Butt’s list of paintings by Lucien Pissarro at The Brook, Stamford Brook, in 1949

This painting, a rare still life among Lucien Pissarro’s oeuvre, is an outstanding work of his early years, showing the sophistication that he had achieved even by the age of twenty-two. Having abandoned his mother’s fond wish that he should become a businessman in London, Lucien returned to France from 1884 to 1890, studying wood-engraving with Auguste Lepère. The following year he began to work on illustrations for children’s books and magazines, which was to become the genesis of the Eragny Press, the exquisite private press that he founded upon settling permanently in England in November 1890.

Apples on a tablecloth is a manifesto of a new way of seeing. Moving between Paris, the Pissarro family home at Eragny and relatives in northern France, Lucien was in the centre of a ferment of artistic debate. In 1885, the year this still life was painted, he met Paul Signac, Georges Seurat and Théo van Rysselburghe and was enthused with their theories of Pointillism, in which compositions were built up with separate dots of vibrant colour to fuse into a picture on the retina. Camille Pissarro was equally fascinated by this experiment and at the eighth and final Impressionist Exhibition of 1886 he, Lucien, Signac and Seurat caused outrage as exponents of Pointillism: Neo-Impressionism was born.

Apples on a tablecloth slightly predates Lucien’s Pointillist paintings, but the tipped-up picture plane, with the rumpled tablecloth deployed on the surface as a decorative element, and the boldly sculptural apples show how much he was in tune with the avant-garde. The apples are built up from unmixed hatchings of pure colour, dashes of emerald green, red and yellow. They have parallels with the still lifes of Paul Cézanne, whom Camille Pissarro had championed since they had met in 1861, calling him ‘one of the most astonishing and curious temperaments of our time’[1]. Cézanne in return said of Camille ‘he was a father to me’[2]. It may be significant that Cézanne passed briefly through Paris and probably met Camille in the summer of 1885, on his way to a long sojourn in Provence.

Lucien sets himself a challenging task, basing his composition on large areas of white. The tablecloth with its myriad folds is a skein of interconnected, richly impasted coloured shadows: lilac, pink, grey, violet. The light flowing through the patterned, translucent curtain is a tour-de-force, as is the treatment of the window frame, bathed with brightness. Far to the left Lucien sets a patterned ceramic jug filled with paintbrushes. In neat, serried ranks, they look like soldiers on parade: a statement that this is a young artist to be taken seriously.

In 1886 Lucien met Vincent van Gogh, newly arrived in Paris. The following year Vincent dedicated à l’ami Lucien Pissarro his Basket of apples now in the Kröller-Muller Museum, Otterlo. With its slanting picture plane, focus on white and vigorous, sculptural brushwork, it is no doubt a homage to his friend’s Apples on a tablecloth.

Other Works By
Lucien Pissarro: 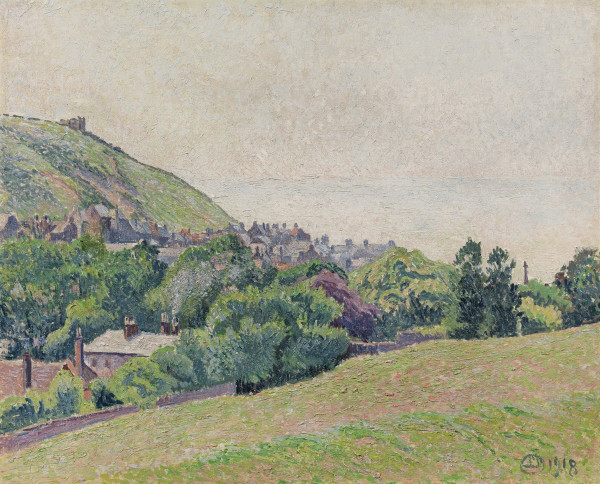 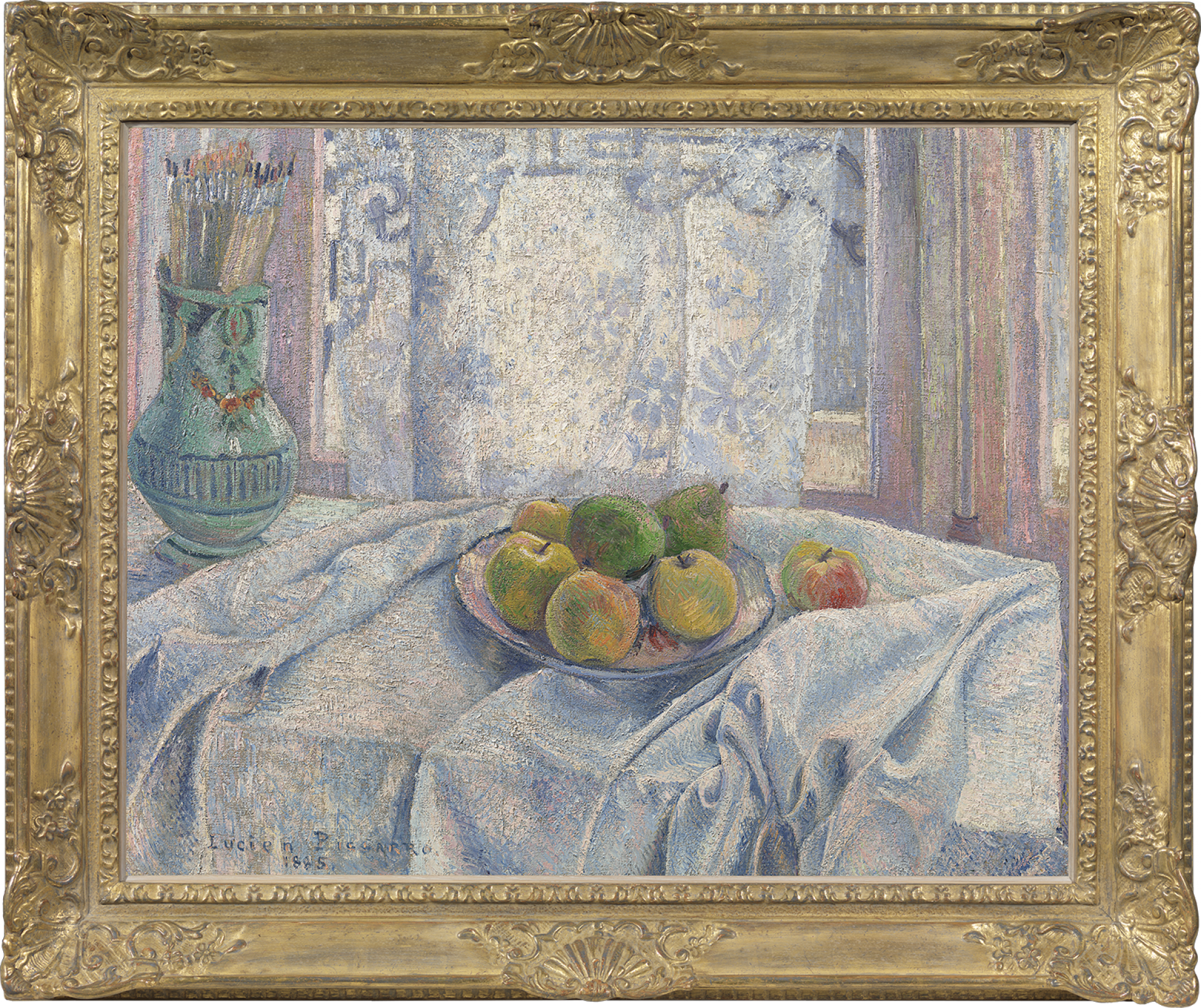