This painting has been selected for an important Lavery exhibition to be held at the National Gallery, Ireland in 2023-24.

Although he painted views of the Clyde estuary and the Antrim coast in his youth, it was only in the early years of the twentieth century when he was returning regularly to his house at Tangier that Lavery became captivated by the ever-changing moods of sea and sky. As ACR Carter was quick to point out, the earliest of these pre-dates the emergence, after fifty years in storage, of Turner’s majestic Evening star, a scene on Margate sands that had recently been placed on display at the National Gallery (The Art Journal, 1908, p.234). Lavery, he maintained, had captured the ‘eulogistic view’ of such works, in pictures like The sea shore, moonlight (c.1906-7, unlocated) before they entered public consciousness.

If for Lavery, Morocco rather than Margate, supplied this inspiration, it was a source that would not be silenced during the years between 1907 and 1921. Eventually an impressive marine body of work emerges in three distinct groups of pictures in both 10 x 14 inch canvas-boards, and more elaborate, larger format, 25 x 30 inch canvases. The three types are distinguished as those with high horizons, taking in the Spanish coast to the north, and viewed from the artist’s house on Mount Washington; those painted in the bay area, probably from the tower of the Villa Harris, looking westwards towards the city; and those painted on the shore, also to the west of the Medina, looking due east towards Cape Matabala (see Kenneth McConkey, John Lavery, A Painter and his World, 2010, pp.111-116).

In these latter works, the sandy shore was often busy with traders making their way to Grand Socco, the market-place of the luminous ‘La Blanca’, while the magnificent bay, often dotted with Arabs dhows, reached out to the calm ‘southern sea’ where passing steamers would find safe anchorage. Placing one or two Arab characters at the water’s edge, gave a sense of scale in these canvases – and here Lavery was taking his cue from favoured predecessors such as James McNeill Whistler and Gustave Courbet in works such as Harmony in blue and silver: Trouville, 1865 (Isabella Stewart Gardner Museum, Boston) and The beach at Palavas, 1853 (Musée Fabre, Montpellier).

The southern sea however is one of a relatively few instances in which the painter dispenses with all such eye traps and addresses the vacant immensity of space. While the city slept and within walking distance of Walter Harris’s house, Lavery could savour the morning light as the sun rose over the foothills of the Rif mountains, at the far end of the bay. At other times ships and figures would be recorded, but neither appears in this moment of sepulchral calm. Only a distant shaft of morning sunlight illuminates the Rock of Gibraltar that sits on the horizon, in a pale pink glow. Elsewhere the concentration is focused on essentials – the disposition of elements - the sweeping strokes of turquoise and cobalt blue, and the gently lapping waters of the incoming tide. Above all, and swiftly noted, are static cumulus clusters. On other days, according to RB Cunninghame Graham, a ‘ceaseless wind’ rushed through the Straits, clearing the sky of fleecy clouds, but not here. A painter might stare at these masses, as the Romantics did, and find them ineffable. In such a sky there are no convenient perspectives to take the eye into limitless space, nor are there cues to cut the surface of the sea, in this most reductive of Lavery’s seascapes. Only slow, sparkling ripples divide the elements – and all is abstraction.

Lavery returned to Glasgow in 1885 and became one of the leading members of the Glasgow School.  He moved to London in 1896 and helped Whistler to found the International Society in 1898, of which he was a Vice-President until 1908. He was elected an Associate of the Royal Academy in 1911 and became a full Academician in 1921. He was appointed Official War Artist to the Royal Navy in 1917, and was knighted the following year. Lavery travelled extensively during his career, visiting Morocco, Italy, Spain, Germany and Holland, and these visits inspired many of his works. Following the death of his wife, Hazel, in 1935, Lavery set off for Hollywood with the idea of painting the ‘stars’. With the outbreak of the Second World War, he returned to Ireland and died at Kilmaganny in 1941. 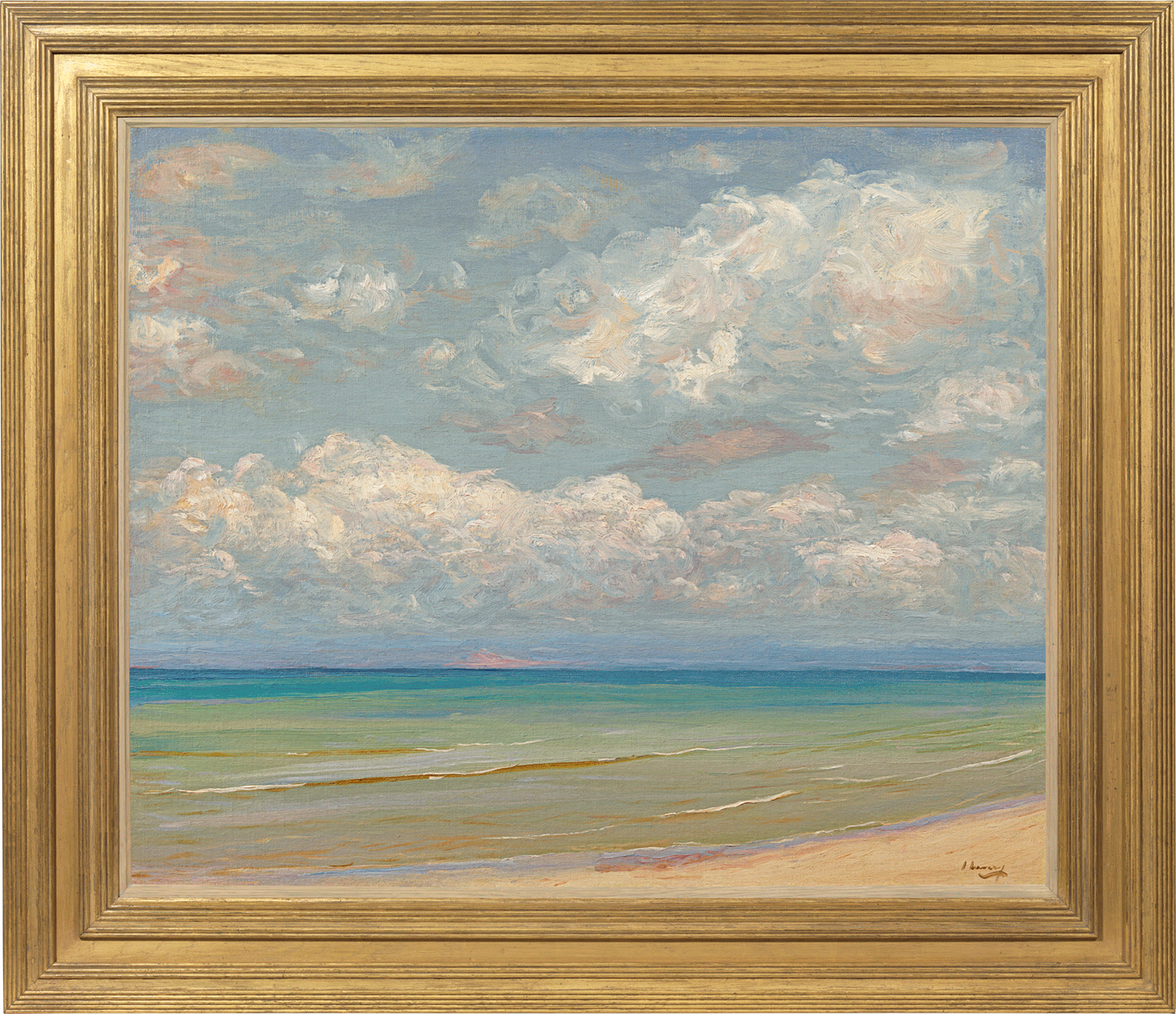