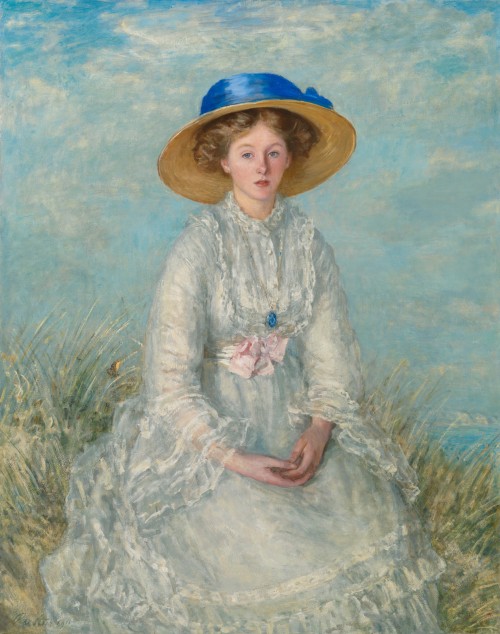 In its original carved and gilded ‘Adam’ style fluted frame

‘Artists at work and play at the Grafton Galleries’, The Sphere, 4th February 1911, p.6

In the run up to Christmas 1910, London reeled at the scandal produced by Roger Fry’s exhibition, Manet and the Post-Impressionists, at the Grafton Gallery. There had been shows of Impressionist painting before, but these ‘Post-Impressionists’, who included Henri Matisse and Pablo Picasso, were outrageous. The press had a field-day and Henry Tonks counselled his students at the Slade School of Fine Art not to attend. When the works were taken down in the third week of January 1911, they were replaced by those of members of the National Portrait Society holding its inaugural exhibition. Here it seemed, public and critics were on safer ground, sanity was restored and the madness of Cezanne and Van Gogh was dispelled. While it would be easy today, to take sides, the British portrait painters’ show should not be simply dismissed. Contemporary critics regarded works by Whistler and Watts, in one instance, dating back to 1840, with respect, as they enthused over Sargent’s Lady Agnew (National Gallery of Scotland), a work that looked back some eighteen years to his best period. Among the more challenging contemporary pieces by Lavery, Philpot and Orpen, was Philip Wilson Steer’s recent portrait of Mrs Geoffrey Blackwell, a painting ‘attractive in its airiness’, and different in style from those of his younger contemporaries.[1] The great erstwhile British Impressionist, had taken a new turn and in the words of one reviewer, ‘The scrupulously careful painting of the flesh suggests that Mr Steer is genuinely imbued with Pre-Raphaelitism.’[2]

It was clear nonetheless that in painting his atmospheric background, Steer had not wholly rejected Impressionism, but like Manet, an artist who had fascinated him since his student days in Paris, he would apply a selective focus in the characterisation of sitters. This was true as much to classic figure studies such as A Girl in Blue (Hugh Lane Gallery, Dublin) as to the present work, in which the head and hands of the sitter are drawn with great care.[3] Like the landscape backdrop in Mrs Violet Hammersley (fig 1), Steer’s homage to Boucher, we can assume that the cliffs, sea and grassy bank in the present work were added in the studio.[4]

Technical challenges aside, Mrs Geoffrey Blackwell, was painted between the final months of 1909 and January 1911, and it would come to affirm an enduring friendship.[5] That year, on 22 April, four months after his engagement had been announced, Thomas Geoffrey Blackwell, heir to the Crosse and Blackwell food manufacturing company, read Charles Holmes’s review of Steer’s exhibition at the Goupil Gallery in The Times.[6] Such was the writer’s enthusiasm that Blackwell was prompted to visit the Regent Street gallery, make two purchases, and an intimate friendship with the painter that lasted throughout the rest of their lives was the result.[7] This painter-and-patron relationship blossomed in the months after Blackwell’s marriage to Shirley Maud Lawson-Johnston of Beckett House, Shrivenham in Berkshire, on 5 October 1909.[8]  Although Blackwell was to purchase important works by Tonks, Orpen, Clausen, Sargent, John, Philpot and others, his closest confidante and frequent house-guest was Steer. In the years leading up to the Great War, Steer would regularly describe his summer painting campaigns to Blackwell, as he toured the Home Counties, the Cotswolds and East Anglia in search of landscape motifs.[9]

Laughton correctly points to the high Victorian revivalism of the young Mrs Blackwell’s attire and looks back to the grand manner portraiture of Mrs Violet Hammersley.[10] However, the two portraits are very different. While Shirley Maud Blackwell has charm and presence, she was no grande dame. Laughton also makes useful comparisons between the present work and the small oil study (fig 2) which lacks both the depth of characterisation and the ‘airiness’ of the present finished version.

And while in general terms we might confirm Steer’s and Tonks’s frequent recourse to the well-springs of English Art, in which the fancies of eighteenth century portraiture were recycled through the filters of Victorian illustration, in this fresh-faced sitter these hurdles are overcome. Where Tonks faltered, Steer succeeded. Dressed à la Tissot for a warm summer’s day, a straw picture hat frames her face, and as in Gainsborough’s celebrated portrait of his daughters, a butterfly flits through the grass at her side. From pictures like this younger Jazz Age portraitists such as Ambrose McEvoy took note. The blond harmonies of the rococo are reimagined and irradiate from Mrs Blackwell’s restraining presence and this, more than any other single instance, confirmed that path of ‘the newcomer’ collector and placed him before the artist’s ‘more important and ambitious efforts’.[11]

The attractive sitter in filmy frilled white muslin seems not quite firmly seated on the rough seaside grass but with regard to such Arcadian scenes, practicality usually takes second place to a romantic vision. The large straw hat seems almost to hover above her head, the wide blue silk band matching the colour of the enamelled watch which hangs on a chain round her neck, just above the pale pink ribbon bow at the waist. The layered muslin of the dress and sleeve ruffles – ‘the diaphanous fairy-like skirts of our eighteenth century English school’[12] – suggest the inspiration of Gainsborough in the 1780s, a popular theme in fashion from the 1880s; the art critic Eric Newton notes: ‘of course, Gainsborough is among Steer’s gods’.[13] But Mrs Blackwell’s

dress with its full, flounced skirt gathered up at the back, also has the rounded shape of the mid-nineteenth century, what Edith Sitwell describes in her Elegy on dead fashion (1926) as ‘echoes of elegances lost and fled’, a trend that can be seen in a number of early twentieth-century portraits.[14]

The dress also, with its back drapery forming an embryonic bustle, recalls the early 1870s, which itself revived styles of the 1770s/1780s. Fashion is Protean in its ability to re-create fashions of the historic past by incorporating them into the present, even when, from around 1910, a slim, more elongated line in dress was beginning to emerge.

[5] The picture is dated 1911, and catalogued as such by Laughton 1971, (no 452), however, since the National Portrait Society show opened at the end of January 1911, it is likely the work was actually painted in the preceding year and dated as it left the artist’s studio.

[6] Blackwell (1884-1943) was the son of Thomas Francis Blackwell, one half of the food manufacturing company, Crosse and Blackwell. At the time when Geoffrey Blackwell entered the company in 1905, it was the largest producer of tinned and bottled produce in Britain. Blackwell inherited his collecting instincts from his father, a client of Agnew’s.

[7] JB Manson ‘Mr Geoffrey Blackwell’s Collection of Modern Pictures’. The Studio, vol 61, 1914, p. 271, indicates that Blackwell ‘felt an intenser quality of light and air’ in Steer’s work than in ‘the ordinary paintings … decorating the drawing rooms of Mayfair with their empty triviality’. He bought the Whistlerian Boulogne Casino and other pictures quickly followed. It was at this point that his wife’s portrait was added to ‘the remarkable number of the finer paintings of Mr Wilson Steer’, in the growing collection.

[8] Shirley Maud Lawson-Johnston (1889-1943) had three sons and two daughters – all sketched as babies by Henry Tonks. 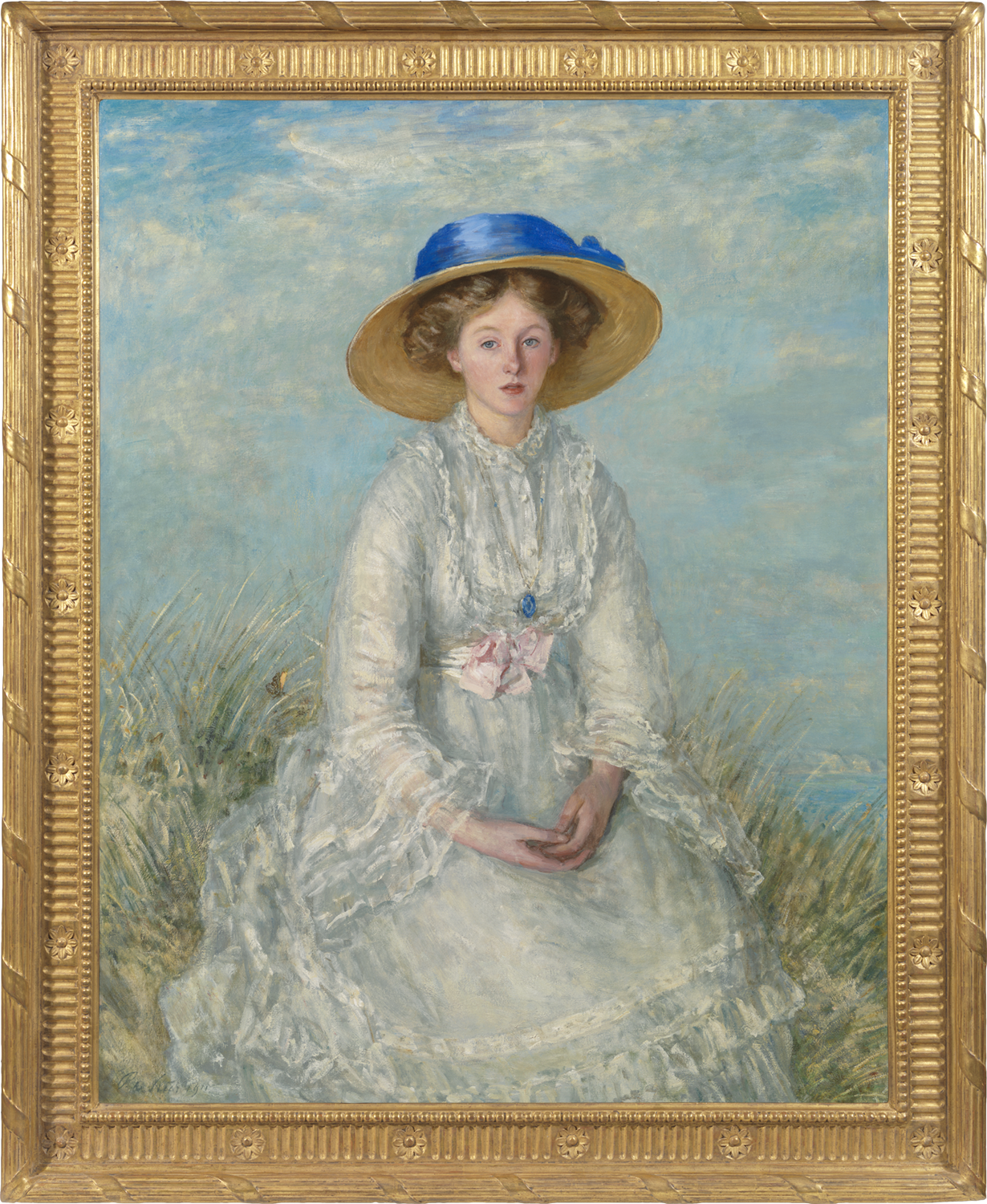