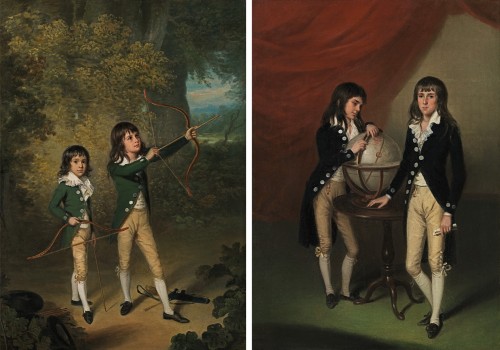 Portrait of two boys with a globe (one of a pair)

Portrait of two brothers, the younger pointing to India on a globe

A pair, the former inscribed on the reverse of the frame: Miss Kensington No.106;

the latter inscribed on the reverse of the frame: Miss Kensington No.105

Arthur William Devis inherited his talent from his father, the portrait painter Arthur Devis (1712-1787). He led an adventurous life, in 1782 sailing for China as a draughtsman in the East India Company ship Antelope. He was wounded by arrows in New Guinea and shipwrecked off the Palau Islands in the Pacific. Devis reached Calcutta in 1785, hoping to make his fortune as a portrait painter. Handsome, charming and generous, he plunged into the extravagant, febrile world of Calcutta society, where East India Company officials lived with all the elegance of Europe and the glamour of the East. One of Devis’s first sitters was the Governor-General of Bengal, Warren Hastings. He made large sums from his portraits, but money always slipped through his fingers.

Devis returned to England in 1795. He built up his reputation as a portrait painter in London, often executing commissions for families with connections to India. He became renowned for portraits of children: his gentle, warm personality put them at their ease. Sydney Pavière, Devis’s biographer, comments: ‘That he was fond of little children cannot be doubted. He painted them so lovingly and well’[1]. This can be seen in the present pair of portraits of four brothers, ranging in age from a boy of about fourteen to one of about six. The elder pair stand in a room with a rich red curtain. The younger brother examines a globe which is turned to India; the family’s connection with that country is made plain.

The paintings make a delightful contrast, yet complement each other. The elder boys, engaged in learning about the world, have the gravity of approaching manhood. Fashionably dressed, they wear seal fobs on their waistcoats for sealing letters; the eldest boy seems to be holding a letter. Their young brothers live still in a world of outdoor play and sunlight. They are depicted practicing archery in the shade of a huge tree, the vastness of which suggests the tropics. The elder is alert, with his eye upon the target. The younger boy, patiently waiting his turn, stares sweetly at the viewer. Amusingly, the brothers’ smart hats have been discarded unceremoniously in the undergrowth, along with the quiver and spare arrows. The relationship between the four children is underlined by their elegant clothing, with all four wearing ruffled shirts and buff-coloured breeches, the elder boys in dark blue coats and the younger in coats of the same cut, but in green.

Both portraits are inscribed Miss Kensington on the reverse of the stretcher. It is possible that the boys are members of the Kensington family who are recorded in Madras in the early nineteenth century. For example, Henry Kensington (d.1825) began his career as a Writer (or clerk, the first rung of an East India Company career) in 1808 and rose to be Registrar to the Provincial Court, Southern Division by 1822[2]. There may well have been earlier generations of the family living in India. Devis visited Madras in 1793.

Arthur William Devis was born in London in 1762, the nineteenth child of the portrait painter Arthur Devis (1712-1787). He received his early training from his father and attended the Royal Academy Schools at the age of twelve. In 1782 Devis was employed as a draughtsman aboard the East India Company ship Antelope, headed for China; he was to record islands in the South China Sea. Off the coast of New Guinea Devis was wounded by arrows fired by tribesmen. On the return journey from Macau the Antelope was wrecked off the Palau Islands, east of the Philippines. While the sailors rebuilt the boat (and helped the inhabitants of Koror island in local conflicts), Devis made many drawings of the ‘King’ of Koror, his wives and the landscape, which were used to illustrate George Keate’s Account of the Pelew Islands (1788).

The newly-reconstructed ship returned to Macau and Devis sailed for Calcutta in September 1784 to make his fortune as a portrait painter. He received commissions from the Governor-General of Bengal, Warren Hastings (private collection), who was about to depart for England, and the High Court Judge Sir Robert Chambers (Yale Center for British Art, New Haven, CT). While Devis travelled around Bengal in search of patrons, he made sketches for a projected series of engravings depicting ‘the arts, manufactures, and agriculture of Bengal’. Only four engravings were published, but the thirty paintings form a valuable record of life in rural Bengal, with keenly observed landscape and still life elements (V&A, London; Ashmolean Museum, Oxford and Yale Center for British Art).

Devis was back in Calcutta in 1791. Despite initially commanding large fees for his portraits and possessed of a charming, cheerful nature which made him popular in Calcutta society, Devis was constantly in financial straits, thanks to his naïve open-handedness. In 1793 he was paid the huge sum of £2,530 for his portrait of Governor-General Charles Cornwallis, then fresh from his victory over Tipu Sultan of Mysore. The same year he went to Madras to begin a large painting of Lord Cornwallis receiving the sons of Tipu Sultan of Mysore as hostages (private collection), brilliantly orchestrating portraits of dozens of British and Indian officials. The young sons of Tipu granted him several sittings and followed the progress of their portraits with enthusiasm.

In 1794 Devis married an actress, Mrs Coombes; the following year they set sail for England. She abandoned him in Lisbon but plagued him for money until her death in 1805. Devis struggled to establish himself as an artist in London, relying on portrait commissions from his Indian connections but also exhibiting scenes of Indian life, Palau Island subjects, animal paintings and theatrical subjects at the Royal Academy until 1821. By 1800 he was bankrupt and was saved from prison by his patron John Biddulph, whom he had probably met in India. In 1804 Devis was sent to debtors’ prison, but was released after a few months and embarked upon one of his most celebrated paintings, The death of Nelson, c.1805-7 (National Maritime Museum, Greenwich). He studied Nelson’s body when it returned to Spithead in the Victory and drew his officers from life. The painting and Josiah Boydell’s engraving of it enjoyed success with the public.

In his latter years Devis gained a reputation as a painter of children’s portraits. He made a number of large-scale group portraits and ambitious single portraits, such as that of the actress Eliza O’Neill as Belvidera, a Greek courtesan. Around 1819 he painted The Apotheosis of Princess Charlotte (Belgian Royal Collection), commissioned by her husband Prince Leopold to commemorate the heir to the British throne, who tragically had died in childbirth in 1817. Despite his talent and industry, Devis left his second wife Margaret Lanchester and his daughters in poverty when he died in London in 1822. 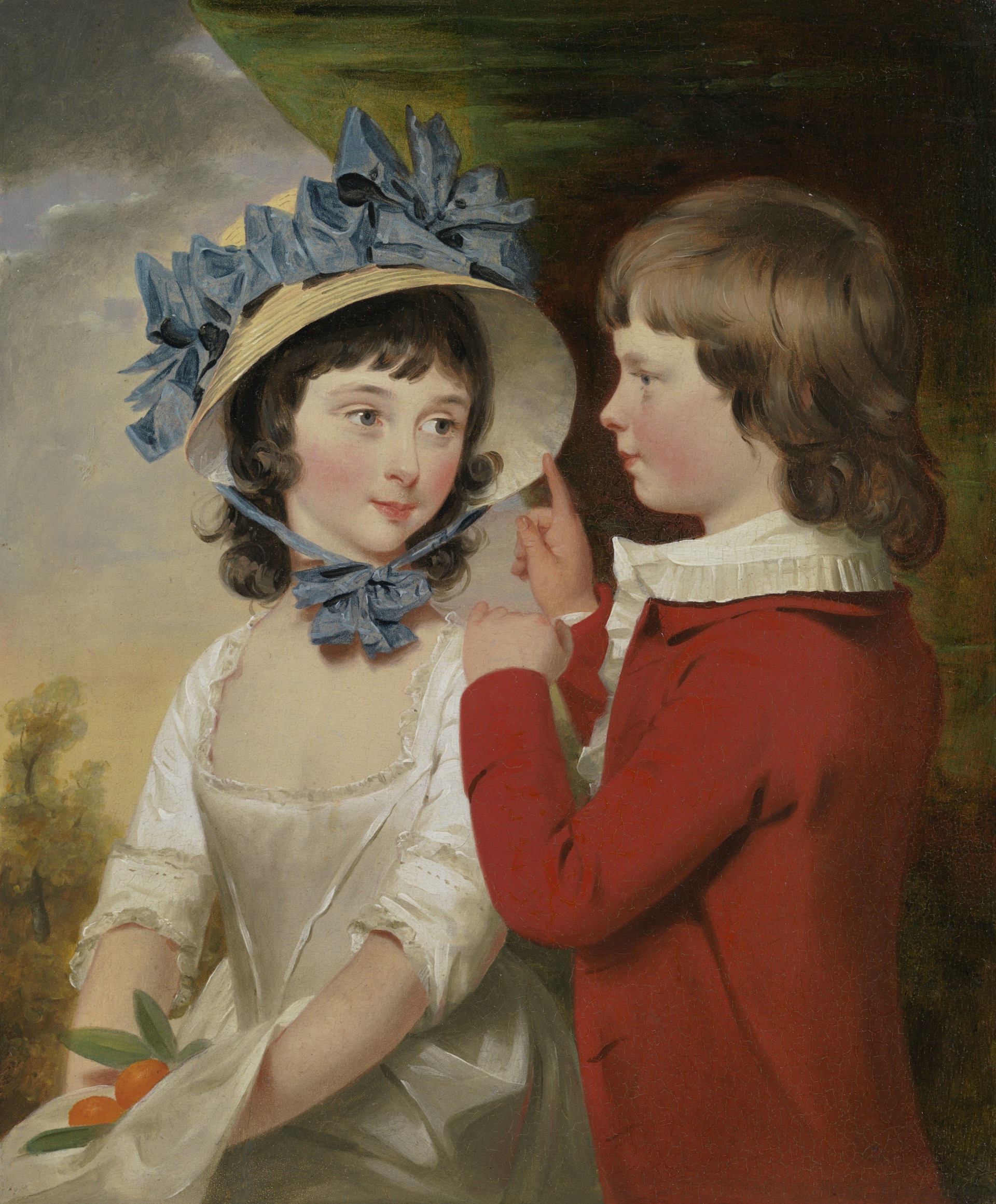 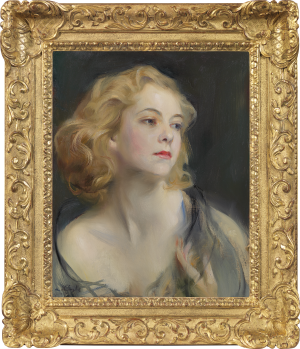 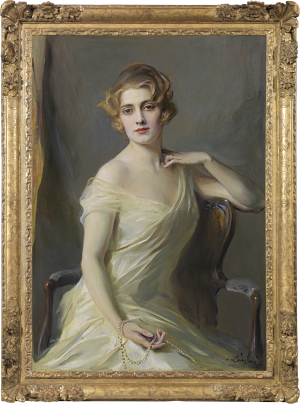 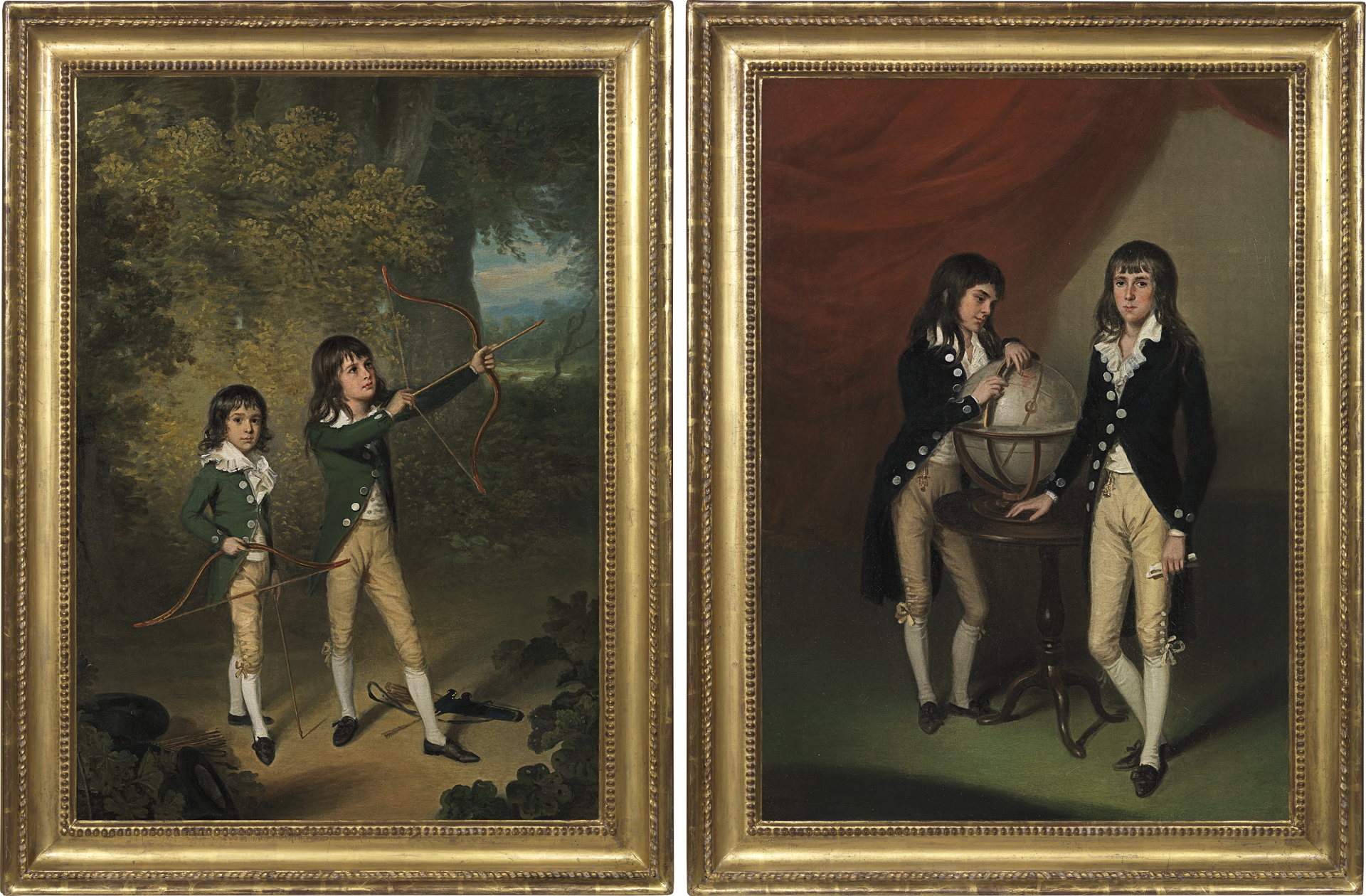