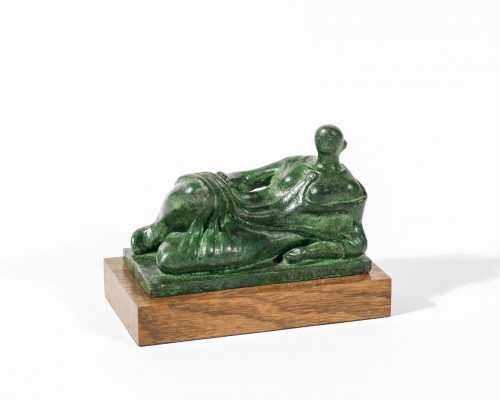 Signed on the base: Moore

Reclining Figure 1945 is the sketch-model for Memorial Figure 1945-46, Hornton stone (LH 262), sited at Dartington Hall, Totnes, Devon. Another cast is in the collection of Museum Ludwig, Cologne.

When Moore was commissioned by Dorothy and Leonard Elmhirst to carve a memorial to his friend Christopher Martin, the Artistic Director at Dartington Hall, the reclining figure with its stability and sense of repose suggested itself as the most appropriate arrangement, Moore stating that, ‘It fits in with my belief that sculpture should be permanent, should last for eternity.’[2] Moore and Martin had met during the War (perhaps through Sir Kenneth Clark) when Moore became a member of the Visual Arts Group associated with the Arts Enquiry, a study of how the arts were organised in England and Wales which Martin initiated and ran. This bronze is one of several maquettes made in preparation for the almost life-sized Memorial Figure carved in Horton stone, although it differs from the finished work in the arrangement of dress and the position of the feet. The naturalistic style of this piece and the final sculpture recalls the dignified poise of the Northampton Madonna and Child, 1943-4.

Moore discovered the perfect setting for the reclining figure in the grounds of Dartington Hall and held it in mind as he created the maquettes to produce a work of sculpture in absolute harmony with the landscape loved by Martin: ‘The figure is a memorial to a friend who loved the quiet mellowness of this Devonshire landscape. It is situated at the top of a rise, and when one stands near it and takes in the shape of it in relation to the vista one becomes aware that the raised knee repeats or echoes the gentle roll of the landscape. I wanted it to convey a sense of permanent tranquillity, a sense of being from which the stir and fret of human ways had been withdrawn, and all the time I was working on it I was very much aware that I was making a memorial to go into an English scene that is itself a memorial to many generations of men who have engaged in a subtle collaboration with the land.’[3]

The drapery covering the recumbent woman also suggests the swelling forms of the Devonshire landscape, its deep folds likened by Moore, ‘with the form of mountains, which are the crinkled skin of the earth.[4] Moore’s search for a figurative representation of ‘quiet stillness’ in harmony with its landscape setting, parallels Hepworth’s intent to achieve a work of serenity in the unity of her figures in the landscape. Richard Cork suggests that the sculpture may also represent a memorial to Moore’s mother, who died the year before he started work on the commission.[5] 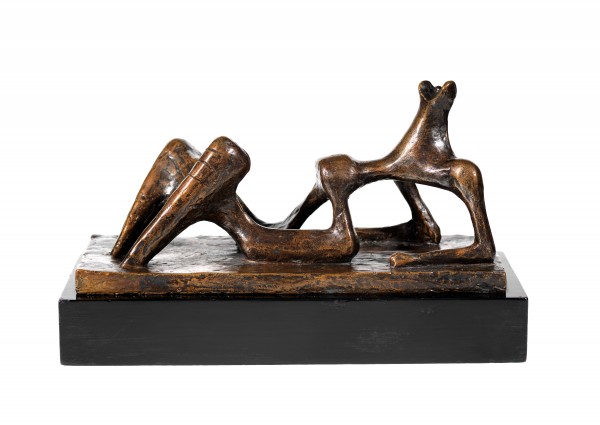