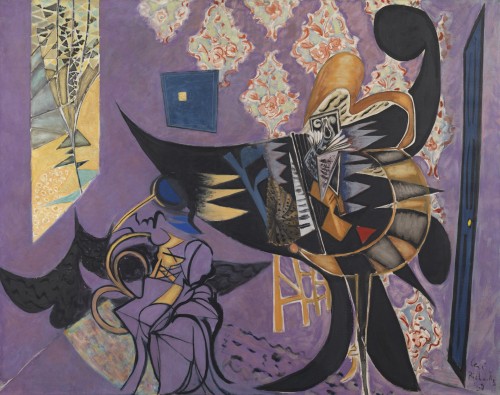 Signed and dated lower right: Ceri / Richards / 50; signed, dated and inscribed on the stretcher: Shadows in a Room /

Wilfrid A. Evill, October 1954, then bequeathed to

This rich, resonant interior full of fanciful forms and vivid colours, lyrically evokes the transformative possibilities of art and music upon the imagination. Set within the shaded

sitting room of Ceri Richards’ Wandsworth Common home, the composition centres on the dramatic shadows cast in elaborate arabesques upon his black Cramer baby grand piano and a seated figure whose schematic outline is encircled by the continuous curves of a bentwood chair. Richards’ fantastic representation of the silent piano before an empty rush-seated, ladder-backed chair features a radically foreshortened keyboard with angular sheet music on its stand in graphic contrast to the voluptuous golden ribbon of the instrument’s silhouette with open lid, behind which a shadow seems to arc into the musical symbol of a clef. On the left, the bright curvature of the piano is reflected in the petal-like loops of the bentwood chair, a smaller though similarly extravagant shadow cast upon it like dark leaves. Daydreaming in the shaded, silent room perhaps engrossed in imagined music, the contemplative figure provides a sense of reverie and recollection, part of the painter’s creative process, the richness of her imagination invigorating the interior which reverberates with colour and light. With the aid of its shadow the still, yet exuberant piano seems to fill the room reaching from floor to ceiling, from the closed, foreshortened door towards the bright, splintered sunlight of the window. Unlike the pitch-dark, foreboding interior in Richards’ Cold Light, Deep Shadow of the same date (Tate, London), even in shadow the present work is full of light; illuminating the rich, floral forms of the patterned wallpaper and casting a pool of beautiful, prismatic colour on the floor. The brilliance of the white, yellow, green, grey fractured light seen through the window, echoes or inspires not only the tapering forms of light and shadows in the purple room, but also prefigures Trafalgar Square: Movement of Light, 1951, created by the artist in connection with his commission for the Festival of Britain.

Ceri Giraldus Richards was born on the 6th June 1903 in the small mining village of Dunvant near Swansea, the eldest of three children of Thomas Coslett Richards, a tin-plate worker, and his wife Sarah. Richards became a gifted pianist, his childhood steeped in music and in poetry, from which he developed a life-long admiration for Dylan Thomas. After Gowerton Grammar School he was apprenticed to an electrical firm while attending classes in technical drawing and art. He studied at Swansea School of Art from 1921–24 and received a scholarship to the Royal College of Art from 1924–27. In 1927 Richards began work as a commercial artist for the London Press Association, two years later marrying Frances Clayton, his contemporary at the RCA. In 1930 he held his first one-man show at the Glynn Vivian Art Gallery, Swansea.

In 1936 Richards exhibited a free-standing Object with the Surrealist group at the London Gallery. He was elected to the London Group the following year and began exhibiting relief-constructions. Richards gave up commercial work and began teaching part-time at the Chelsea College of Art in 1937. A Firewatcher with Air Raid Precautions in Cardiff during the War, Richards was also commissioned by the Ministry of Information to make drawings of tin-plate workers in South Wales. He became Head of Painting at Cardiff School of Art from 1940–44 and held his first one-man show in London at the Leger Gallery in 1942. At the end of the War,

the artist and his family moved back to London where he resumed teaching at Chelsea and later taught lithography at the Slade School of Art from 1954. During the late 1950s, Richards designed sets and costumes for Opera productions of Ruth by Lennox Berkeley and Noyes Fludde by Benjamin Britten. In 1960 a retrospective of Richards work was held at the Whitechapel Art Gallery and he was awarded CBE. Two years later he represented Great Britain at the Venice Biennale where he won the Einaudi Painting Prize. In 1981, a decade after his death, he was the subject of a major retrospective at the Tate Gallery. 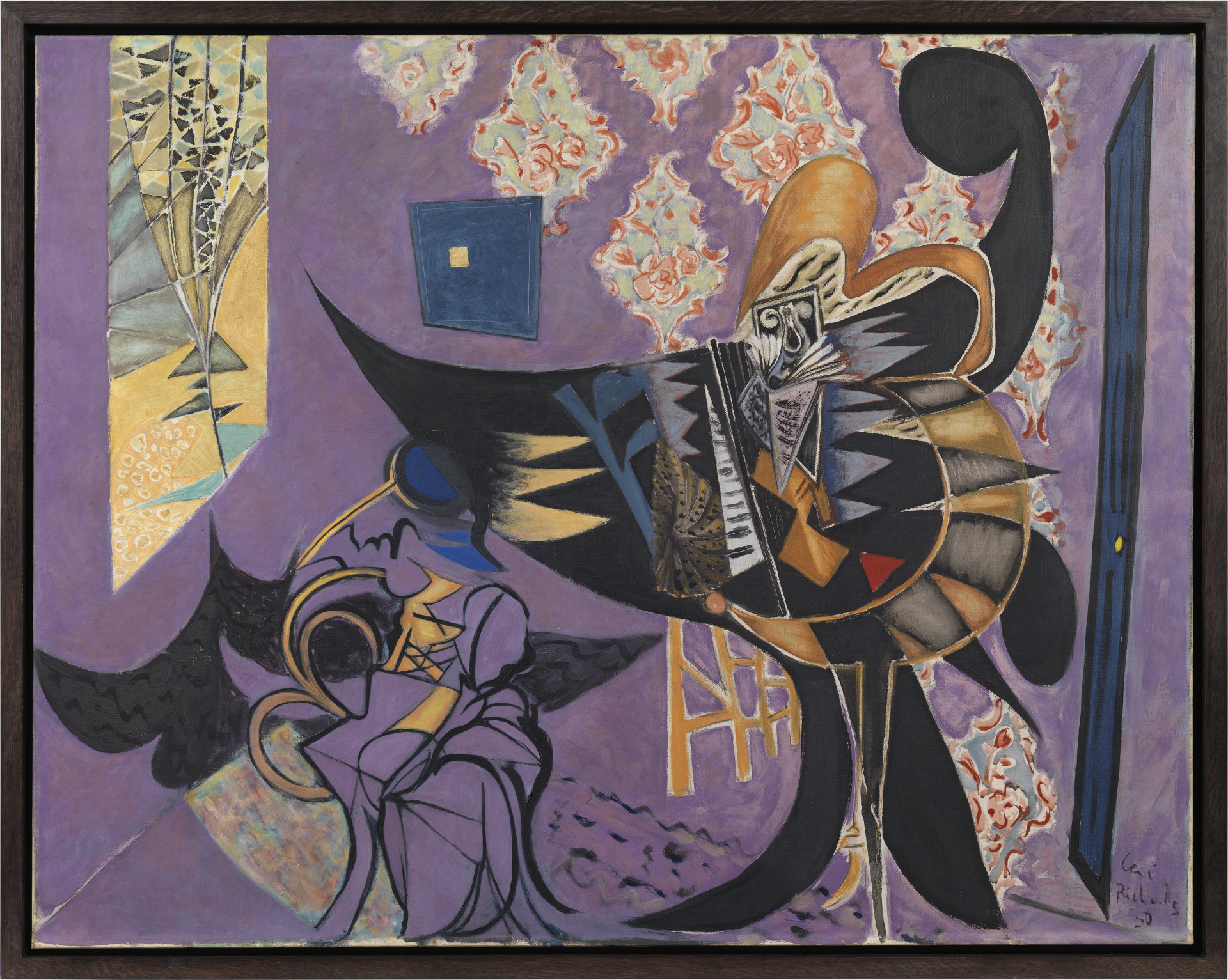