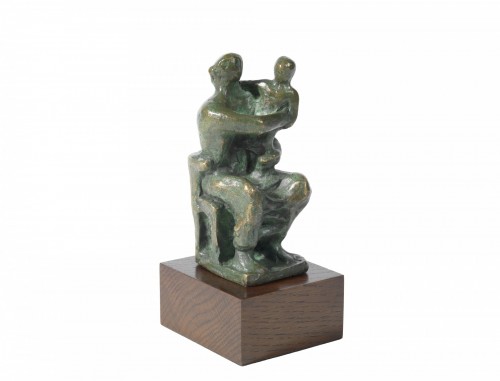 Signed on the back: H Moore

Conceived in terracotta in 1943 and cast circa 1945 by Charles Gaskin, The Art Bronze Foundry, London in an unnumbered edition of 7 plus one artist’s copy

The present work was cast from a terracotta model made in 1943 for the Horton stone Madonna and child at the Parish Church of St Matthew’s, Northampton, which Moore described as ‘one of the most difficult and heart-searching sculptures that I ever tried to do.’[1] Having seen Moore’s Shelter drawings, the Rev. Walter Hussey (later Dean of Chichester) commissioned the sculpture to commemorate the half-centenary of the church, giving the artist his first opportunity to carve in stone since the start of the war.[2] Despite the clear correspondence of the subject to his preoccupation with the Mother and child theme, the gravity of the commission made Moore apprehensive and he insisted upon months of preparatory drawing and approximately twelve clay models before being satisfied that his idea could be realised.

‘I began thinking of the ‘Madonna and Child’ for St Matthew’s considering in what ways a ‘Madonna and Child’ differs from a carving of just a ‘Mother and Child’ – that is, by considering how in my opinion religious art differs from secular art. It’s not easy to describe in words what this difference is, except by saying in general terms that the ‘Madonna and Child’ should have an austerity and a nobility, and some touch of grandeur (even hieratic aloofness) which is missing in the everyday ‘Mother and Child’ idea. Of the sketches and models I have done, the one chosen has I think a quiet dignity and gentleness. I have tried to give a sense of complete easiness and repose, as though the Madonna could stay in that position for ever (as being in stone, she will have to do).’[3]

[2] He also commissioned Benjamin Britten to compose a cantata for the celebration.