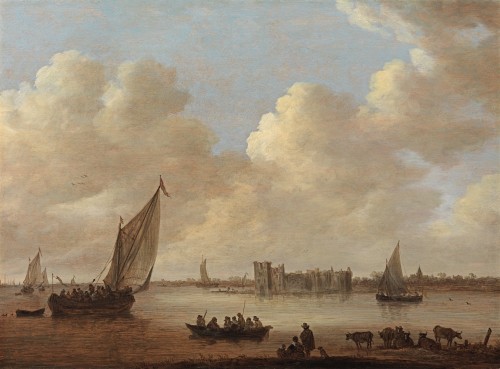 A view of Rupelmonde Castle on the Scheldt, with boats in the foreground

A view of Rupelmonde Castle on the Scheldt, with boats in the foreground

where acquired by a private collector, Germany

Few artists have captured the spirit of the Netherlands, with its waterways mirroring huge skies, as well as Jan van Goyen. He could work effortlessly on every scale from small cabinet paintings to the expansive size employed here. Van Goyen was master of the ‘tonal’ landscape, using soft, gradated hues of brown and pale blue to conjure up the moisture-laden, wind-ruffled terrain. His works of the 1630s have a golden-brown hue. He returned to ‘tonal’ landscapes at the start of the 1650s, the era in which this view of Rupelmonde Castle was made. Strong, horizontal compositions are also characteristic of this phase, giving an airy sense of panorama.

Van Goyen travelled the length and breadth of the Netherlands throughout his career, making brilliantly atmospheric sketches in black chalk, which he used as inspiration for his oil paintings back in the studio. Sometimes, as here, his oils incorporate a recognisable topographical feature. In others, the combination of waterways, distant churches and cloud-fretted skies conjures up the essence of the northern Netherlands, without revealing a specific location. The deep love of the unassuming Dutch landscape sprang from a sense of national identity: the northern Netherlands had revolted against its Spanish Habsburg overlords in the 1580s. The conflict, although sporadic, was not resolved until the Treaty of Münster in 1648, three years before this painting was made.

Van Goyen travelled south to Antwerp and Brussels, the most important towns of the Spanish Netherlands, at the end of the 1640s. Rupelmonde Castle, which features in his black chalk sketches of c.1648 (Kupferstichkabinett, Dresden)[1], guarded the confluence of the rivers Rupel and Scheldt. The Scheldt is the key artery leading to Antwerp, then the Spanish Netherlands’s chief port, and a river of crucial strategic importance for centuries.

The imposing Rupelmonde Castle was built by the Counts of Flanders in the twelfth century, with seventeen towers encircled by a moat. It brings a strong horizontal emphasis to van Goyen’s composition, fluidly painted to evoke sunlight and shadow playing over windows, towers and walls. The castle levied a toll from passing ships. Van Goyen’s foreground is filled with a vivid sense of everyday life. The figures packed into the boats are painted with virtuosic delicacy with the brush tip, almost ‘drawn’ in oil paint, so that clothing, features and even personalities can be made out. The cows grazing by the river side are carefully grouped, in silhouette or face-on, for maximum emphasis against the silvery line of the river current. More than two-thirds of the composition, however, is occupied by the magnificent sky, with clouds spiralling from left to right, forming castles-in-the-air made radiant by the hidden sun.

Rupelmonde Castle was destroyed during the wars against the French in 1678. Today only the base of one tower survives, surmounted by a tower of red Tournai limestone, built as a hunting lodge by Baron de Feltz in the nineteenth century.

A smaller view of Rupelmonde Castle by Jan van Goyen, dated 1650, is in a private collection[2].

The remains of Rupelmonde Castle today. 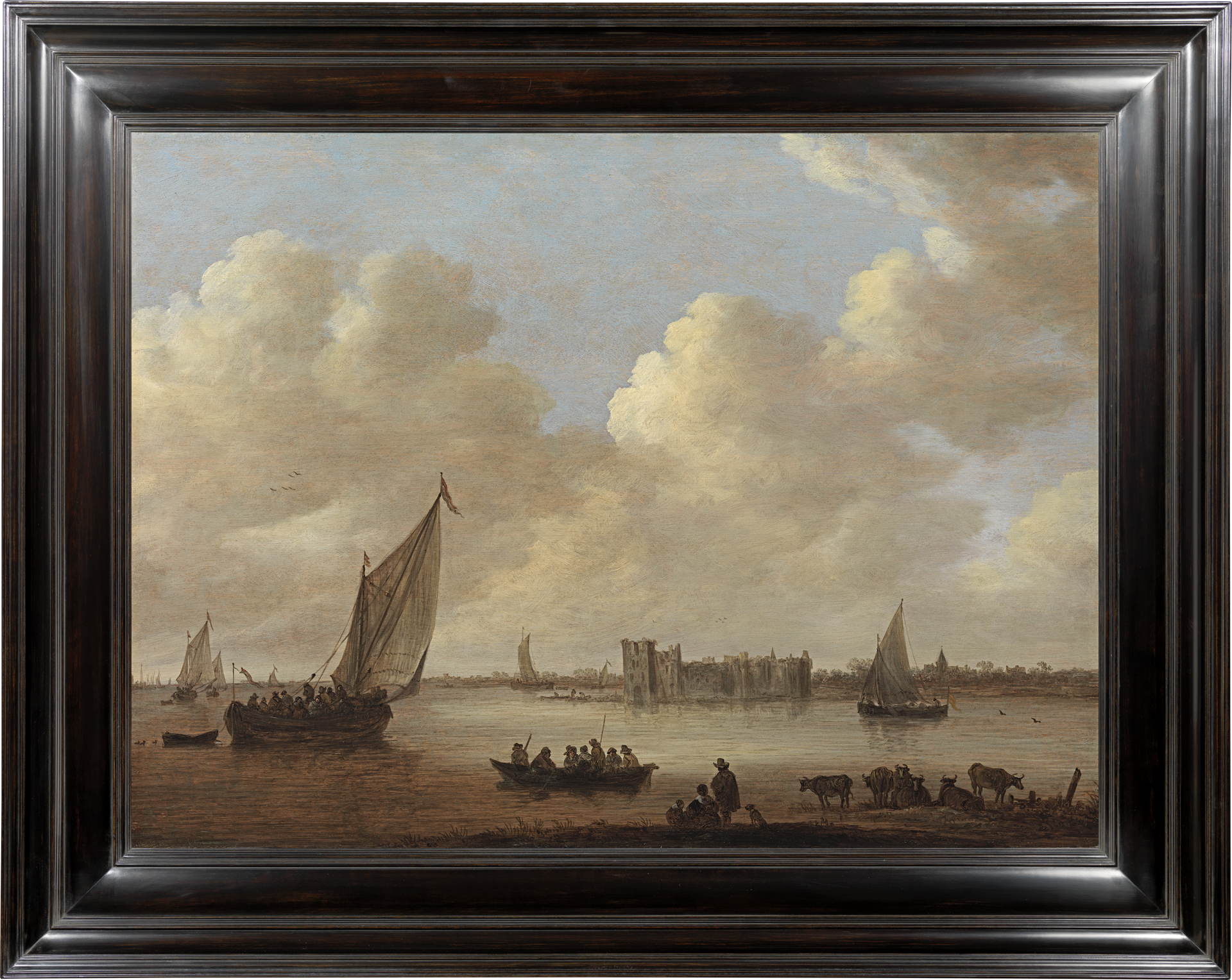