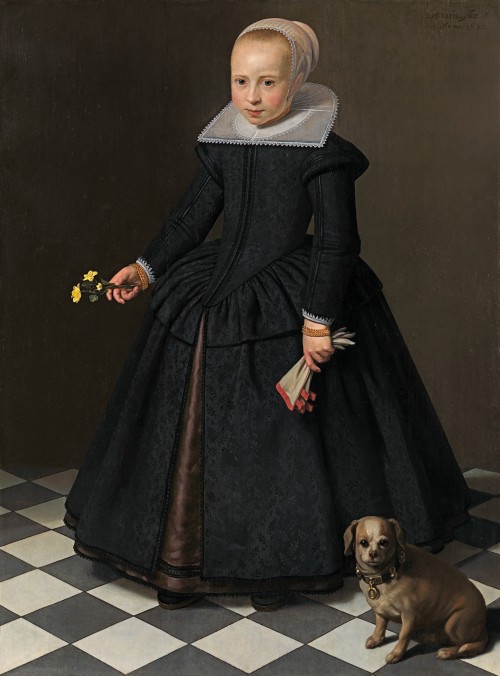 Young girl holding buttercups,with a dog beside her

Portrait of a young girl holding buttercups, with her dog beside her

This portrait was made when Santvoort was only twenty-two, a mere fourteen years older than his sitter. It is his earliest known dated portrait of a child, a type of sitter which he made something of a speciality. Within the context of a formal portrait, Santvoort captures the little girl’s solemn, questing intelligence as well as her flawless, pearly complexion and fine blonde hair. She is both the repository of her family’s dynastic hopes and a delightful, well-loved individual.

Child portraiture was popular in the seventeenth century Netherlands, both among the aristocracy and the high bourgeoisie who impelled the economic powerhouse of Amsterdam, where Santvoort spent all his career. Despite – and because of – high infant mortality, children were treasured for themselves and as symbols of the future. Boys were trained up to inherit businesses. Girls formed marriage alliances which brought wealth and made family networks all the stronger.

As Rudi Ekkart has commented, ‘Santvoort’s most striking gift was his ability to portray children, where his gifts of precise observation and his uncluttered style produced some delightful results’[1]. Here the little girl is set against a plain grey background, standing on a black-and-white chequered stone floor. She wears the restrained, dark clothing fashionable in the northern Netherlands in the first decades of the seventeenth century. The fashion for wearing black was originally linked to Spanish influence when the whole of the Netherlands was under Spanish Habsburg control. Among northern Netherlandish Protestants, it signified a rejection of showiness which reflected the purity and piety of the soul within. Within these constraints, the high status of the child is obvious. Her gown of black – an expensive dye in itself - is of fine, figured material with a brown satin underskirt. Her collar and close-fitting cap are edged with exquisite lace and she wears triple-banded gold bracelets on both wrists.

The dark colours of the girl’s costume are offset by a pair of costly pale kid gloves, edged with coral ribbon, and by the buttercups which she holds in her right hand. Buttercups symbolize her unmarried state, while gloves were often given as betrothal presents. It is possible that this painting was made to mark a betrothal, not for an imminent marriage, but the promise of an alliance when the girl had reached her mid-teens. The dog, as well as being a charming companion for a child, is a symbol of fidelity. Upper class children were expected to teach good behaviour to their pets, as well as to submit themselves to adult instruction and conduct themselves always in a seemly and gracious manner.

Dirck specialized in portrait painting, both single portraits of adults and groups such as The governesses and wardresses of the Spinhuis, 1638 (Amsterdam Museum). He was the leading painter of children in Amsterdam towards the middle of the seventeenth century. His first known dated child portrait is the 1632 Portrait of a young girl holding buttercups, with her dog beside her (Richard Green Gallery, London). The last dated works that can be firmly attributed to him are from 1645. Santvoort seems to have become wealthy and largely ceased painting, although he remained active in the painters’ guild[2]. He was its Dean in 1658 and was still acting as an assessor of paintings in 1678. Santvoort married twice, the first time in 1641 to Baertjen Pont, with whom he had a son named Rembrandt in 1648, and secondly in 1657 to Tryntje Riewerts (d.1689). He died in Amsterdam in 1680. 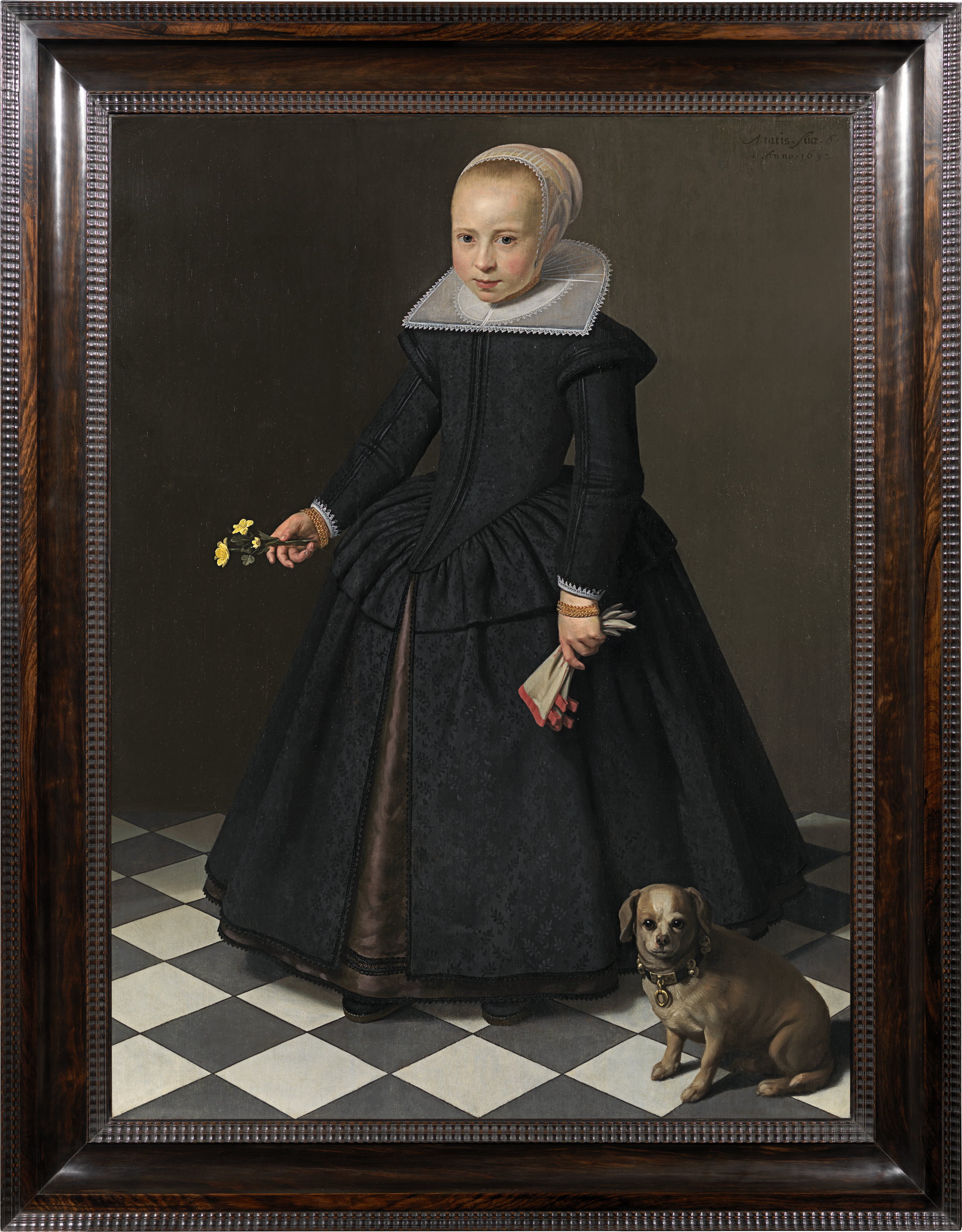