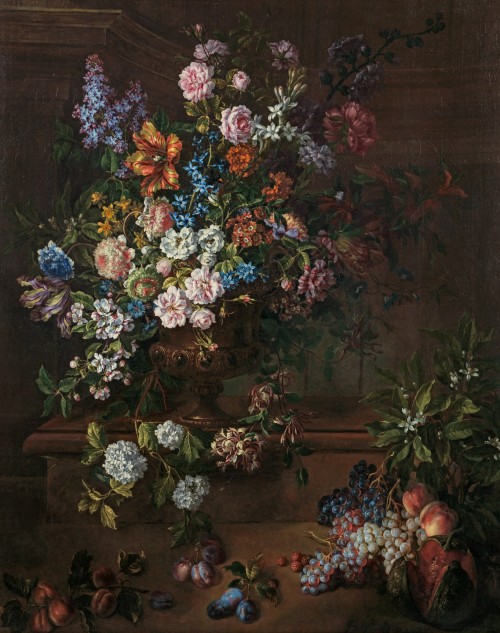 Flowers in a gilt urn with fruit on a ledge

Flowers in a gilt urn with fruit on a ledge

London, Richard Green, The Flowerpiece Through the Centuries, 1988, no.4, illus. in colour

Jean-Baptiste Monnoyer worked for Louis XIV, but in 1690 was enticed by the Duke of Montagu to come to England, where he worked for Queen Mary, the Duke and many other members of the English aristocracy. Monnoyer was celebrated for his lavish, baroque still lifes of flowers and fruit, of which this painting is a fine example.

Monnoyer places his bouquet in a gilt urn on a table top. The serpentine composition leads the eye from top right to bottom left and down through the swags of fruit to the orange blossom at centre right. The flowers and fruit are dramatically lit, emerging out of the gloom so that the brightest blooms, such as the pale pink and white roses, apple blossom and viburnum, seem to pulsate with light. The texture of the fruit is exquisitely rendered. Monnoyer is particularly skilled in depicting complex, delicate flowers such as the twisting, yellow-and-pink honeysuckle blossom, which is detailed down to the feathery stamens.

Like most seventeenth century flower painters, Monnoyer places flowers that bloom at different seasons into a pleasing ensemble. To do so, he must have relied on drawn studies or perhaps oil sketches kept in the studio as reference. The tulips and lilacs in this painting bloom in April, the roses and honeysuckle in June and July.

The three pale pink roses almost at the centre of the composition are Damask roses (Rosa damascena), so called because they were thought to have been introduced to England by Crusaders returning from Syria. They were particularly prized in Monnoyer’s day for their double flowers and rich fragrance. The complex arrangement of petals is suited to Monnoyer’s virtuosity, his ability to suggest textures and the play of light over intricate natural forms.

Orange blossom was also a favourite motif in Monnoyer’s paintings, the shiny, sculptural leaves and waxy flowers being suited to his preference for crisply-defined forms and rich impasto. Introduced from the East by the Portuguese in the fifteenth century, orange trees were grown in pots to provide decoration outside in the summer months and sheltered indoors from northern European winters. Orangeries became a status symbol of baroque Europe; the vast one at Versailles, designed by Jules Hardouin-Mansart, was built in 1684-86. Louis XIV’s gardeners, by careful pruning and withholding of water, coaxed the King’s orange trees to flower almost all the year round. An orange tree in a lavishly-decorated pot appears in Monnoyer’s Vase d’orfèvrerie, oranger et singe (Musée de Versailles)[1].

By 1866 this painting was in the collection of Sir Harry Stephen Meysey-Thompson (1809-1874) of Kirby Hall, Great Ouseburn, North Yorkshire. Thompson was a well known agriculturalist who helped to found the Yorkshire Agricultural Society in 1837 and the Royal Agricultural Society the following year. He was MP for Whitby 1859-65 and Chairman of the North Eastern Railway 1855-74. Thompson was created a Baronet in 1874. His seat, Kirby Hall, was designed by Lord Burlington and Roger Morris in 1755 for Sir Harry’s ancestor, Stephen Thompson; John Carr was Clerk of Works. Kirby Hall was demolished circa 1920 and only the service wing remains.

Jean-Baptiste Monnoyer is famed for his decorative flowerpieces, found in many country houses in France and England. Born in Lille in 1636, Monnoyer first studied history painting in Antwerp, before arriving in Paris before 1650, where he worked on the Hôtel Lambert. Monnoyer rapidly established a reputation as a specialist in floral and still life decoration. In 1665 he was accepted as a member of the Academy; in 1673 he first exhibited flower still lifes at the Salon. He rose to be Conseiller of the Academy in 1679.

Monnoyer collaborated with Charles Le Brun, Louis XIV’s Court painter, on floral and still life decorations for the Grand Trianon at Versailles and the royal châteaux at Meudon and Marly. He also designed floral motifs and borders for the Gobelins and Beauvais tapestry works.

In 1690 Monnoyer went to England for a few months at the invitation of Ralph Montagu, later Duke of Montagu, English Ambassador to Louis XIV. He settled in England permanently in 1692, working at Boughton, Montagu House (now the site of the British Museum), Windsor Castle, Kensington Palace and Hampton Court. His patrons included Queen Mary, the Duke of St Albans and the Earl of Carlisle, for whom he worked at Burlington House. A number of engravings were made after Monnoyer’s paintings, extending his reputation beyond the circle of his aristocratic patrons. Monnoyer collaborated with other artists, providing floral elements in the portraits of Godfrey Kneller. At Burlington House, Kensington Palace and Hampton Court, Monnoyer was assisted by his son Antoine Monnoyer (1677-1647), who with great ability continued the family tradition of flower painting into the eighteenth century.

During his prolific career, Monnoyer executed easel paintings and designs for overdoors and overmantels; his works show an awareness of Flemish and Italian baroque flower paintings, imbued with a French delicacy and an all-pervasive freshness of vision.

The work of Jean-Baptiste Monnoyer is represented at Versailles; Hampton Court; the Hermitage, St Petersburg; the Metropolitan Museum of Art, New York; the Louvre, Paris; the Musée Fabre, Montpellier and the Musée des Beaux-Arts, Rouen.