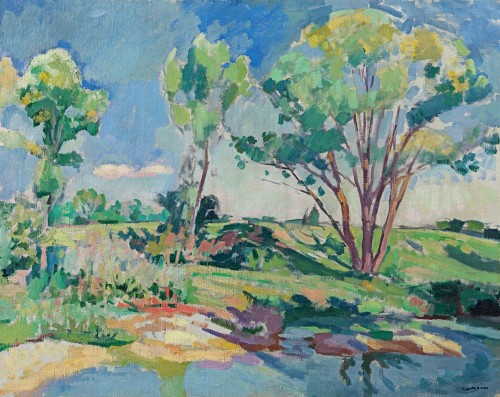 inscribed with the title on the stretcher

Daniel-Henry Kahnweiler, Galerie Kahnweiler, Paris, inv. no.22, acquired from the artist in 1907

Madame Grammont-Camoin has confirmed the authenticity of this painting, which will be included in the forthcoming catalogue raisonné of the work of Charles Camoin

Charles Camoin here evokes the heat and colour of the South of France, his native region: he was born in Marseilles in 1879. The Arc is a Provençal river which rises near the village of Pourcieux, passes through Aix-en-Provence and flows into the Etang de Berre, a lagoon which connects with the Mediterranean west of Marseilles.

Camoin studied with Gustave Moreau and in his student days met a group of artists, many of whom would remain lifelong friends and associates, among them Henri Manguin, André Derain, Maurice de Vlaminck, Georges Rouault, Henri Matisse and Albert Marquet. These young men shocked Paris in 1905 when they showed at the Salon d’Automne compositions which featured anti-naturalistic, hot colours and bold black lines, emphasizing that the viewer was looking at paint on canvas, not a faithful representation of nature. A critic dubbed them ‘Fauves’ (wild beasts).

Although painted a mere two years after the ‘Fauve’ exhibition, Bords de l’Arc reflects Camoin’s more complex response to the avant-garde art of his day. He later commented: ‘If I was a fauve, it’s because I painted that way. I had the same exclusive love of colour that I have for my friends. But I was never concerned about theories and principles, I was unintentionally fauve...I’m driven by my instincts’. Camoin draws out every filament of colour in this southern landscape, employing subtle and unexpected hues to convey the bleaching effect of intense Mediterranean light. The shadows of the tree trunks are pink and purple, a patch of foreground vegetation sketched in vivid salmon pink. The colours elide gracefully into one another without jarring: pea green set by the side of midnight blue, buttermilk yellow by lilac. Camoin’s broad, rectangular brushstrokes remind us that we are viewing impasted paint on canvas, while conjuring up a poetic scene of wind-ruffled trees by a deliciously cool river. The movement of the trees is achieved by leaving patches of pale canvas priming as a halo round the leaves and branches. The angular brushwork and superb handling of shades of green and blue-green owe a debt to Paul Cézanne (1839-1906), whom Camoin met on a trip to Aix-en-Provence in 1901. They maintained a correspondence for the rest of Cézanne’s life. The two Southerners had a natural affinity; Cézanne’s iconic views of Mont Saint-Victoire include depictions of the valley of the Arc.

This painting was a fruit of Camoin’s journey to the South of France with Marquet in 1906. It was shown at the Salon des Indépendents in 1907 and the same year acquired by the visionary art dealer and scholar Daniel-Henry Kahnweiler (1884-1979), who gave Camoin his first one-man exhibition at Galerie Kahnweiler in April 1908; Bords de l’Arc was catalogue no.8. The gallery, at 28 Rue Vignon, had opened the previous May. Kahnweiler, from a wealthy stockbroking and art collecting family, was a passionate ‘defender’ of avant-garde artists, including the Fauves Dérain and Vlaminck. He was an early supporter of the Cubists and the first dealer to sign exclusive contracts with Georges Braque and Pablo Picasso, in 1912. In 1972 the prominent Swedish art dealer Tore Gerschman (1913-1992) bought Bords de l’Arc from the collection of Folke Isacson (1898-1975). Kahnweiler, by then in his nineties, provided a photo certificate confirming his acquisition of the work in 1907, a remarkable souvenir – which remains with the painting - of a vibrant period in the history of art.

Paul Cézanne, Mont Sainte-Victoire and the viaduct of the Arc river valley, 1882-85.

Charles Camoin was born in Marseilles, the son of a paint manufacturer who died when he was six. At the age of sixteen he enrolled in that city’s Ecole des Beaux-Arts. In 1898 he entered the studio of Gustave Moreau at the Ecole des Beaux-Arts in Paris. There he formed lasting friendships with a group of students who would be associated with Fauvism, including Henri Manguin, Georges Rouault, Henri Matisse and Albert Marquet, who was particularly influential. Moreau’s liberal attitude to tuition, as Matisse remarked, ‘set them not on the right roads, but off the roads and disturbed their complacency’.

After Moreau’s death in 1898, Camoin worked with Marquet painting life in Paris and later produced a subtle portrait of his friend (1904-5, Pompidou Centre, Paris, Musée National d’Art Moderne). Military service in 1900 took him to Arles, where he painted landscapes influenced by van Gogh and Gauguin, and in 1901 to Aix-en-Provence. There he met Cézanne, with whom he maintained a lifelong correspondence. The angular brushwork and careful tonal juxtapositions in Camoin’s landscapes owe a debt to Cézanne.

In 1904 Camoin had his first one-man exhibition, at Berthe Weill’s gallery in Paris. The following year he took part in the infamous Salon d’Automne in which the vibrant, anti-realistic colours and bold linearity employed by the rising generation led them to being dubbed Fauves (wild beasts). He later commented: ‘If I was a fauve, it’s because I painted that way. I had the same exclusive love of colour that I have for my friends. But I was never concerned about theories and principles, I was unintentionally fauve...I’m driven by my instincts’. Camoin travelled extensively, visiting Naples in 1904; in 1906 staying with Marquet in the south of France, where they met Manguin, Signac and Cross; visiting Corsica, Tangiers, London, Frankfurt and Morocco in 1912-13 with Marquet and Matisse. In 1913 he exhibited at the Armory Show in New York, which introduced European avant-garde art to America. Camoin’s subjects included portraits, nudes, landscapes and still lifes executed with a directness of vision and vibrant colour.

In 1913 Camoin suffered a crisis of confidence and destroyed more than eighty canvases in his studio. While serving as a soldier in the First World War he worked in watercolour and pastel. In 1918 he met Renoir, spurring him to work en plein air and to adopt a more sensuous, impressionistic approach. In 1920 Camoin married Charlotte Prost. In his later career he divided his time between studios in Montmartre and St Tropez. He was made an officer of the Légion d’Honneur in 1944 and elected Commander of the Ordre des Arts et Lettres in 1959. Charles Camoin died in Paris in 1965.

The work of Charles Camoin is represented in the Musée des Beaux-Arts, Marseilles; the Musée Granet, Aix-en-Provence; the Musée National d’Art Moderne, Paris; the Musée Fabre, Montpellier; the Nationalgalerie, Berlin; the Stadtmuseum, Bonn and the Museum of Modern Art, New York. 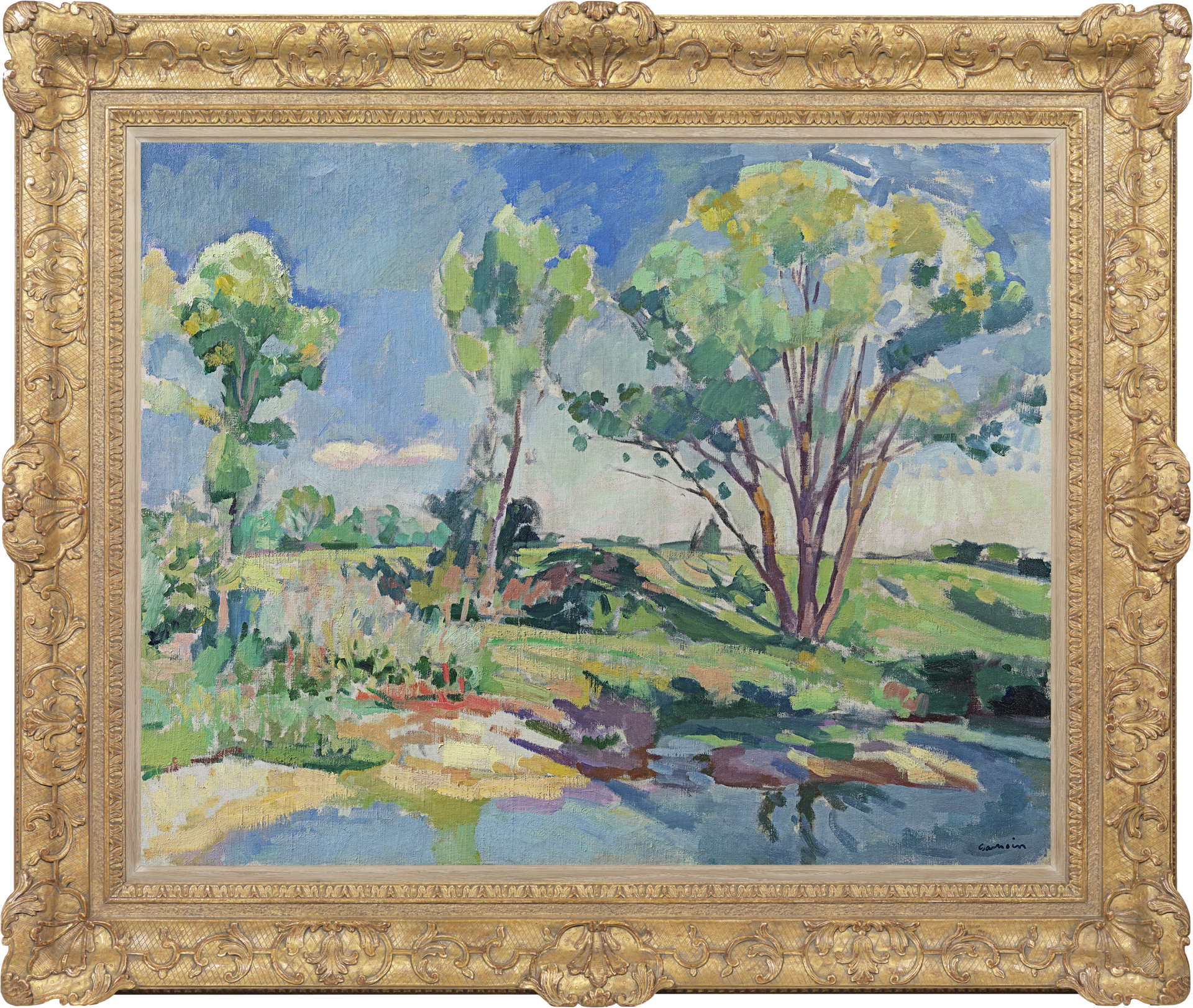