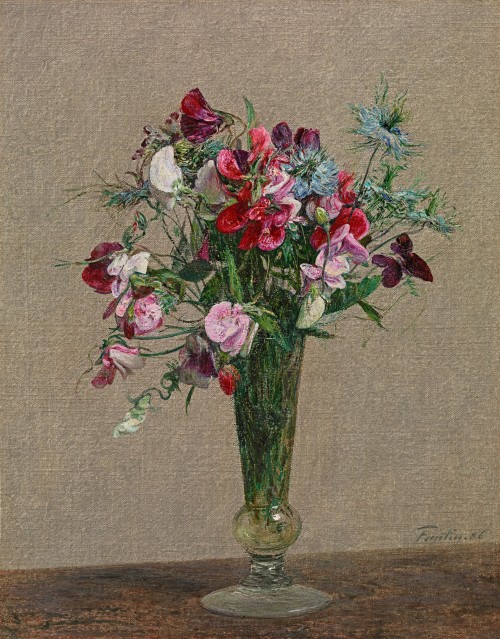 Henri Fantin-Latour was renowned for his still lifes of flowers, which he painted from the 1860s until his death in 1904. Calm and contemplative, they expressed his shy and retiring nature. Although he was on good terms with the Impressionist painters, Fantin’s approach to art was fundamentally different from them. He once remarked that he had ‘a horror of movement, of animated scenes, and the difficulty of painting in the open air with sun and shade’[1]. He preferred to work in the studio, placing flowers against a plain background, the better to study their individual shapes and colours. The serene nature of Fantin’s flowerpieces pays homage to the eighteenth-century master of still life, Jean-Baptiste-Siméon Chardin (1699-1879), whom he greatly admired.

In 1876 Fantin-Latour married a young artist, Victoria Dubourg (1840-1926), whom he had met when both were copying paintings in the Louvre. After their marriage the couple spent summers at Victoria’s small country house at Buré in Lower Normandy, where many of Fantin’s later flower paintings were made. He preferred old-fashioned, rather neglected cottage gardens, full of larkspur, chrysanthemum, hollyhocks, poppies, forget-me-not and carnations.

In this painting of 1886, Fantin revels in the jewelled colours and delicate shapes of sweet peas and nigella (love-in-a-mist), evoking the corkscrew stems and butterfly-like petals of the sweet peas and the spiky, ethereal quality of the nigella. His brushwork, richly impasted and allusive, conveys the exuberance of nature while giving each bloom its considered place within the composition. The complexity of the flowers is offset by the plain glass flute vase, light brown background and the austere diagonal of the table, which concentrates the viewer’s attention on the beauty of the newly-picked bouquet.

Henri Fantin-Latour was renowned for sensitive flower still lifes, portraits and romantic figure subjects which explored myth, history and opera. He was born in Grenoble in 1836, the son of the portrait painter Jean-Théodore Fantin-Latour and his Russian wife Helène de Naidenoff. He studied with his father from 1846 and with Horace Lecoq de Boisbaudran at the Petite Ecole de Dessin in Paris from 1850 to 1856, copying Old Masters. For some months in 1861 he studied with Gustave Courbet, but eschewed his Realism for a gentler style.

In 1858 Fantin met James McNeill Whistler and was encouraged by him to make several trips to England (1859, 1861, 1864, 1881), learning to etch from Whistler’s brother-in-law Seymour Haden. Fantin sold some of his first flower still lives through his friends Ruth and Edwin Edwards, who popularized them in England. A friendship with Edouard Manet led Fantin to exhibit at the Salon des Refusés in 1863, but he refused to take part in the first Impressionist show in 1874. He exhibited at the Salon from 1861 to 1899.

Like the Impressionists, Fantin was interested in contemporary life and from 1864 exhibited group portraits of the artistic and intellectual circles in which he moved. Edouard Manet and Charles Baudelaire, for example, are depicted in Homage to Delacroix, 1864 (Musée d’Orsay, Paris). The figures are genially interlinked, but occupy their own contemplative psychological space. The supremely elegant single portrait of Edouard Manet, 1867 (Art Institute of Chicago) breathes penetrating intelligence but also retains the subject’s mystery.

Although Fantin’s brushwork was painterly and sensuous in approach, he disliked painting en plein air, instead studying his flowers in the studio, against a plain background. In 1876 he married his pupil Victoria Dubourg (1840-1926). The couple spent summers at Victoria’s family home at Buré in Lower Normandy, drawing inspiration from its abundant garden.

Parallel to Fantin’s poetic but precise observation of flowers are his imaginative figure pieces, painted and lithographed in a soft manner, full of chiaroscuro. He took themes from the Romantic music of Schumann and Berlioz and particularly the monumental, mythic operas of Wagner, in works such as Scène première du Rheingold, 1888 (Kunsthalle, Hamburg), inspired by his 1876 visit to Bayreuth. Fantin-Latour died at Buré in 1904. 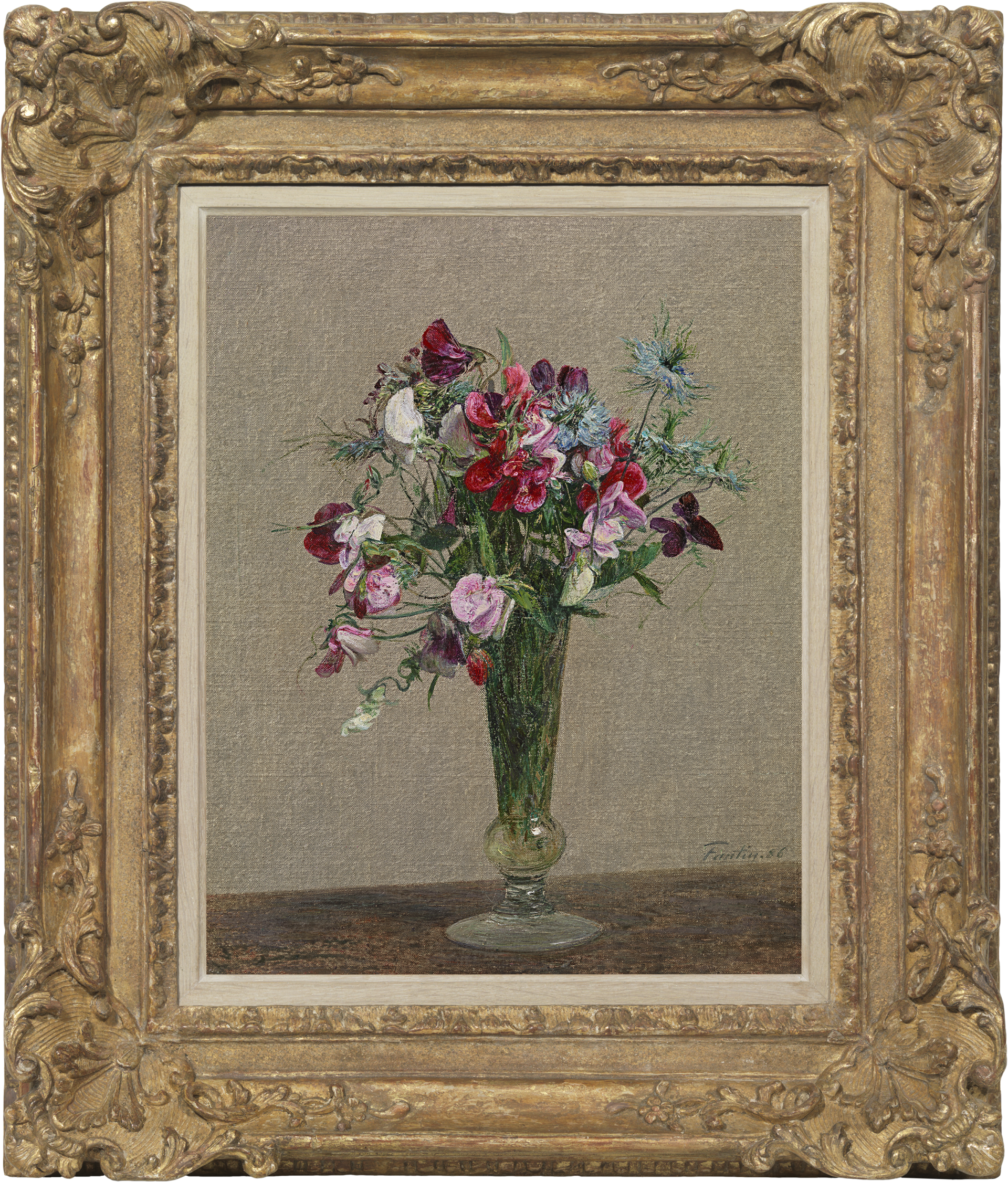