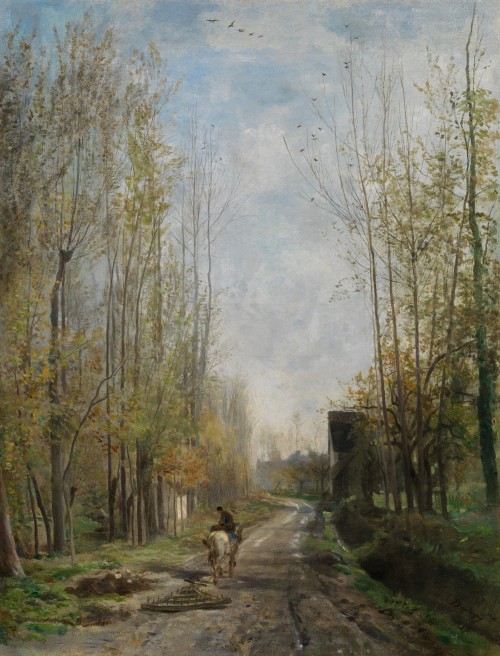 Charles-François Daubigny was one of the most influential painters of the Barbizon School and a crucial link between the mid-nineteenth century naturalist painters and the Impressionists. Among the masters of Barbizon, ‘Daubigny was the one most open to immediate visual experience and the least given to stereotypes and repetitions, in effect the one truly deserving to be called a naturalist’[1].

Daubigny preferred to paint en plein air, often from his studio-boat, Le Botin. This painting evokes a tranquil and timeless rural scene, a peasant on horseback pulling a harrow up a rutted track towards the village of Valmondois. Slender trees frame the composition, beneath a sky of milky blue, while a group of birds soars overhead. The composition, with its upright format and road vanishing into the distance, is strikingly sensitive and original.

Valmondois, on the river Oise about thirty miles north of Paris, was a treasured spot for Daubigny. A sickly child, son of a Parisian artist, he had spent his early years with a nurse in the village, away from the polluted air of the capital. Whereas many of his Barbizon colleagues, including Théodore Rousseau (1812-1867), were inspired by the Forest of Fontainebleau, Daubigny preferred the riverine plains of the Oise, with its moist air and soft light, here captured with such freshness and delight.

Charles-François Daubigny was one of the most influential painters of the Barbizon School, a group of French artists, inspired by nature, who chose to paint primarily outdoors.

A frail child, Daubigny was raised by a nurse in the village of Valmondois on the Oise, twenty miles north of Paris. He first studied with his father, Edmond-François Daubigny, a landscapist and pupil of Jean-Victor Bertin, the neo-classical painter. After a visit to Italy in 1835-6, Daubigny became a restorer at the Louvre and worked as an illustrator. He joined Paul Delaroche’s studio for a brief and unprofitable period and made his debut at the Salon in 1838.

During the 1840s, Daubigny devoted much time to illustration and etching, and in 1850-1, published two albums of landscape etchings. In 1848 a small inheritance gave him more freedom to travel. The following year he met Jean-Baptiste-Camille Corot, who became a close friend with whom he painted in Brittany, Fontainebleau, Normandy and Switzerland.

From 1857 Daubigny began to work from Le Botin, a boat which was converted into a floating studio. Exploring the Seine, Marne and Oise, he would moor and paint en plein air, inspiring Monet to acquire a studio boat in 1872. By the 1850s Daubigny had established his reputation and achieved growing financial success. In 1860 he bought a house at Auvers on the Oise. Daubigny’s preference for working directly from nature imbued his work with a striking spontaneity; however, this became a subject of controversy among more conservative critics. Théophile Gautier wrote in 1861 that ‘it is really a great pity that this landscape artist, having so true, so apt and natural a feeling for his subject, should content himself with an “impression” and should neglect detail’.

Daubigny occupies an important place between the Barbizon tradition and the Impressionists, whom he influenced considerably during the 1870s, anticipating their freedom of brushwork and fidelity to nature. As a member of the Salon juries of 1866 and 1867, he defended the young artists who were to become part of the Impressionist group. Among the painters that he mentored were Eugène Boudin and Johan Barthold Jongkind. In 1870 Daubigny took refuge in London during the Franco-Prussian War and was instrumental in introducing Pissarro and Monet to the art dealer Paul Durand-Ruel, the future champion of Impressionism. He died in Paris in 1878.

The work of Charles-François Daubigny is represented in the Louvre, Paris; the Hermitage, St Petersburg; the Rijksmuseum, Amsterdam; the Fitzwilliam Museum, Cambridge; the Art Institute of Chicago; the National Gallery of Art, Washington DC; the Frick Collection, New York and the Museum of Fine Arts, Boston. 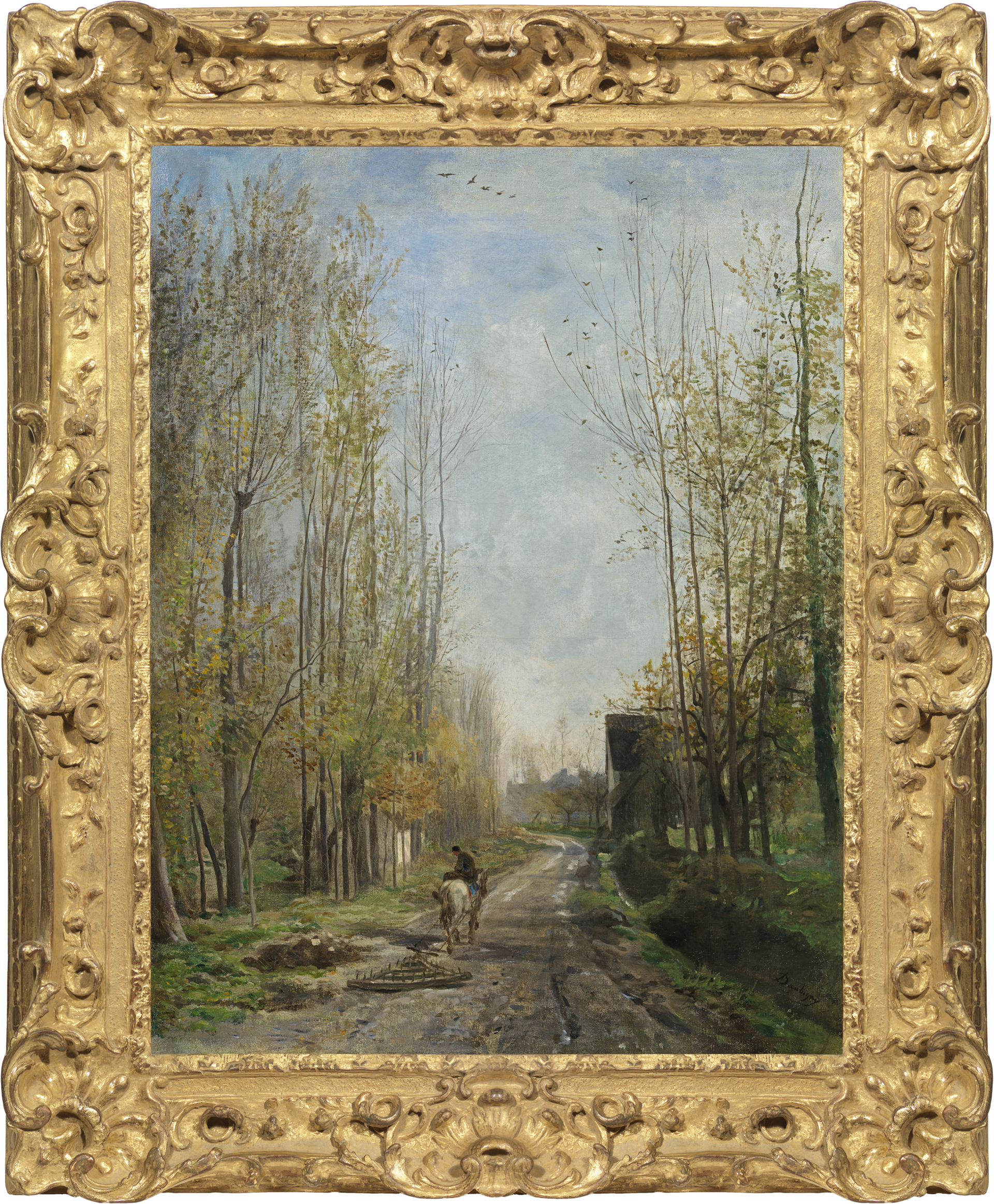