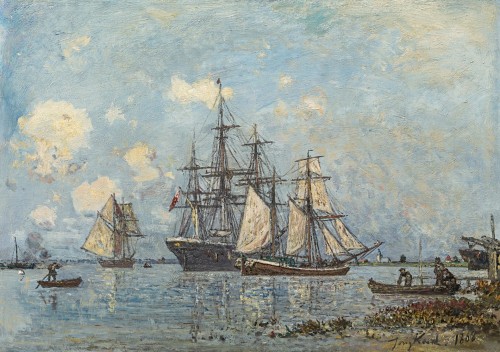 from whom acquired by a private collector, UK;

Paris, Galerie Schmit, Jongkind, 1966 (not included in the catalogue)

Brame & Lorenceau and Janine Sinizergues have confirmed the authenticity of this work, which will be included in the Catalogue Critique de l’Oeuvre de Jongkind now in preparation

Trained in The Hague, Jongkind came to Paris at the invitation of Eugène Isabey in 1846. Profoundly influenced by the landscapes of his seventeenth century Dutch predecessors, he also became part of the French exploration of naturalism and plein-air painting. Professional and personal setbacks caused Jongkind to retreat to the Netherlands from 1855 to 1860. In 1860 a group of artist friends, including Corot, Isabey and Rousseau, raised the funds to enable him to return to Paris. That year he met Mme Joséphine Fesser, a Dutch-born drawing teacher, who became his loyal and practical lifelong companion.

By 1868, when Environs d’Anvers was made, Jongkind was at the height of his powers, domestic contentment and increasing financial success reflected in the confidence of this work. He handles paint with rich impasto, bold black lines defining the intricate rigging of the ships and the foreground vegetation. A blue sky flecked with scudding clouds is mirrored in the calm waters of the Scheldt. Although Antwerp was a bustling, major port, Jongkind chooses to show the serene, timeless aspect of its outskirts. The airy quality of the work, with the sky taking up fully two-thirds of the composition, shows his debt to the seventeenth century countrymen whom he so admired, Jan van Goyen (1596-1656) and Salomon van Ruysdael (1600/03-1670). Jongkind forms a link between the Dutch and French painting traditions, working en plein air alongside his friend Eugène Boudin (1824-1898) and the young Claude Monet (1840-1926), who credited him with ‘the definitive education of my eye’.

Johan Barthold Jongkind was a landscape painter regarded as a precursor of the Impressionists, with his sensitive, dazzling brushwork and interest in the naturalistic depiction of nature at specific seasons, times of day and effects of light. He was born in Lattrop in The Netherlands in 1819 and from 1836 studied at the Academie voor Beeldende Kunsten in The Hague, where his watercolour style was influenced by its Director, Andreas Schelfhout. In 1846 Jongkind was given a bursary by the Prince of Orange to go to Paris and studied with Eugène Isabey and François-Edouard Picot. He painted Dutch scenes, sharply observed views of Paris and coastal landscapes in Brittany and Normandy, where he sketched in the early 1850s. Throughout his career he made particularly fine moonlit river and coastal scenes, inspired by seventeenth century Dutch artists such as Aert van der Neer. In 1848 Jongkind had his first painting accepted by the Salon.

The dissipations of Parisian life and his struggles as a painter led Jongkind to succumb to depression. From 1855 to 1860 he lived quietly in The Netherlands, refining his landscape style and selling works chiefly through Parisian dealers. In 1860 a group of artist friends, including Corot, Isabey and Rousseau, contributed to an auction of paintings to raise funds to bring Jongkind back to Paris. That same year he met Mme Joséphine Fesser, a Dutch-born teacher of drawing and the estranged wife of a chef. She became his loyal and practical lifelong companion.

In 1862 Jongkind made a tour of Normandy, meeting up with his friend Boudin and the young Monet, who was deeply influenced by the Dutchman, crediting him with ‘the definitive education of my eye’. In 1863 Jongkind exhibited at the first Salon des Refusés, but did not participate in the first Impressionist exhibition in 1874, nor in any of their subsequent exhibitions.

In the 1870s Jongkind spent his summers near Grenoble and Lyon and in the south of France, inspired by the dramatic landscape of the Dauphiné with its romantic châteaux nestling in the folds of wooded hills. From 1878 he lived with Mme Fesser and her family at Côte-Saint-André near Grenoble, with occasional trips to Paris and sketching expeditions. His work became more free and allusive, saturated in radiant light, influenced in its turn by Impressionism in paintings such as At Côte-Saint-André (Gemeentemuseum, The Hague). Jongkind died in February 1891, followed a few months later by Mme Fesser.

The work of Johan Barthold Jongkind is represented in the Louvre, Paris; the Musée d’Orsay, Paris; the Gemeentemuseum, The Hague; the Courtauld Institute of Art, London; the National Gallery of Art, Washington DC; the Art Institute of Chicago and the Museum of Fine Arts, Boston. 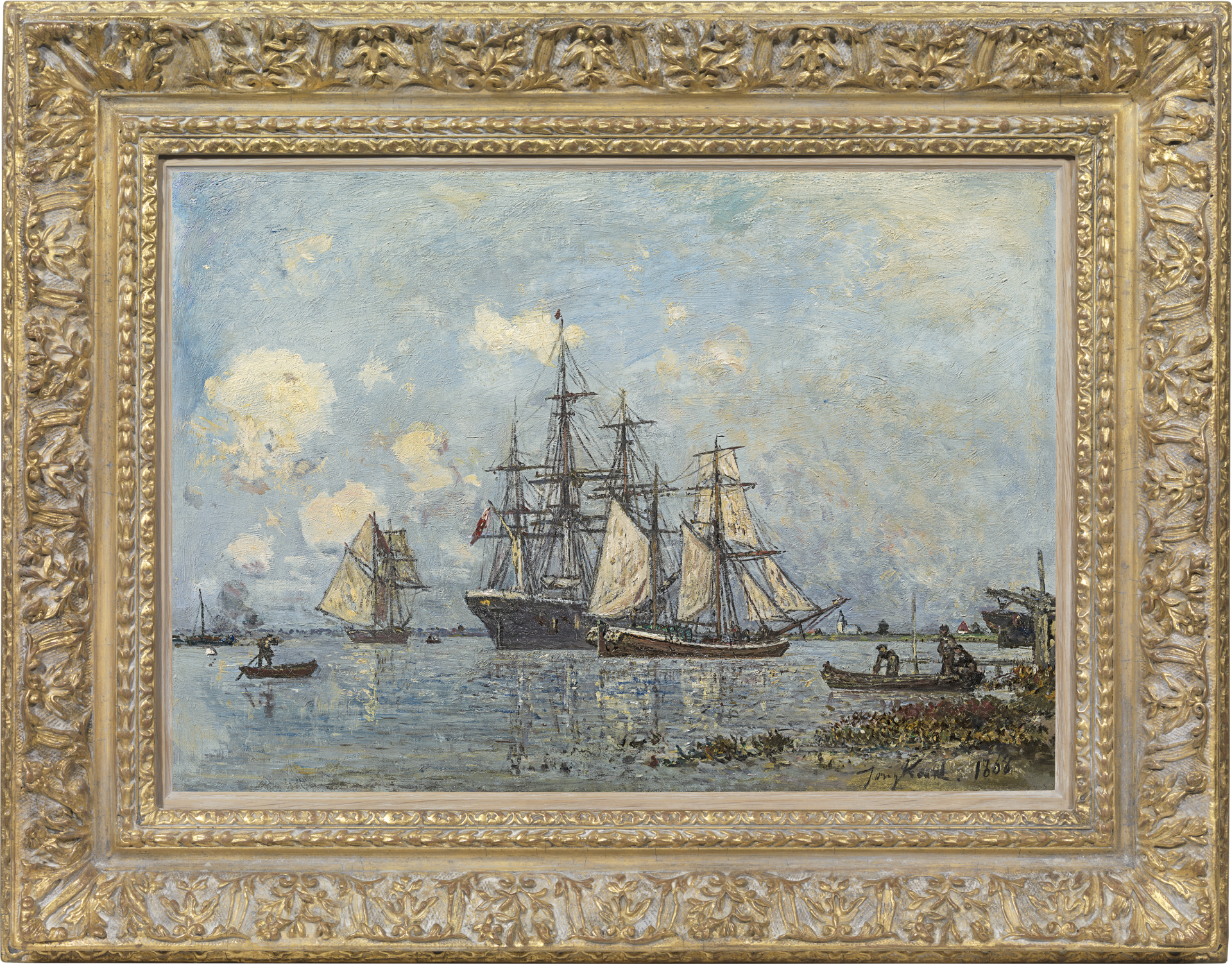