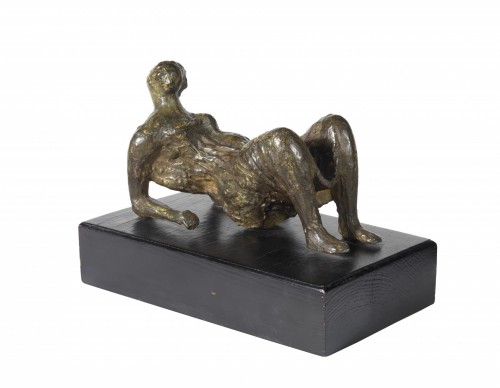 H.R. Milner, Vancouver Island, acquired from the above in 1961, then by descent

The present work is the sculptor’s model for the Draped Reclining Figure, 1952-3 (bronze, length 157.5 cm, LH 336), commissioned for the terrace of the Time-Life building in Bond Street, London. The artist’s copy of the large-scale Draped Reclining Figure was gifted to The Henry Moore Foundation and is on display in the sculpture garden at Perry Green. The other casts are in the Hirshhorn Museum and Sculpture Garden, Washington DC and the Museum Ludwig in Cologne, Germany.

In 1955, the artist gave a talk, recorded by the British Council, entitled Sculpture in the Open Air: A Talk by Henry Moore on his Sculpture and its Placing in Open-Air Sites,[1] in which he recounted the commission for the present work and his concerns in the creation of the Draped Reclining Figure:

‘I think architecture is the poorer for the absence of sculpture and I also think that the sculptor, by not collaborating with the architect, misses opportunities of his work being used socially and being seen by a wider public. And it was feeling that the time is coming for architects and sculptors to work together again, that brought me to do the double commission for the Time-Life building in Bond Street, of both the Bronze Draped Reclining Figure for the terrace and the carved stone screen at the Bond Street end of the terrace. I was first asked to do only the Reclining Figure, and was glad to, as that fitted in with my idea of free-standing sculpture in relation to architecture. It was at a later stage that the architect of the building approached me about the sculptured screen and I accepted the chance of working simultaneously upon two such entirely different sculptural problems…

I knew that the figure would be seen from the Reception Room and it seemed to me that in cold weather a nude – even an abstractish one – might look incongruous to people looking out at her from a warm room. So I became absorbed by the problems of the draped figure, and for a time I was back in the period of the shelter drawings, whose themes had demanded a concentration on drapery. But gradually I evolved a treatment that exploited the fluidity of plaster. The treatment of drapery in my stone carvings was a matter of large, simple creases and folds but the modelling technique enabled me to build up large forms with a host of small crinklings and rucklings of the fabric.

This figure was made for a small terrace, but because the terrace is in the open air I made it over life-size; if it stood up it would be a figure about 7 ft. high. A piece of sculpture that looks life-size in the studio always seems a bit under life-size when it’s out in the open, and to look monumental it has to be a little large than life.’

‘I have tried in this figure to use drapery from what I think is a sculptural point of view.

Drapery played a very important part in the shelter drawings I made in 1940 and 1941 and what I began to learn then about its function as form gave me the intention, sometime or other, to use drapery in sculpture in a more realistic way than I ever tried to use it in my carved sculpture. And my first visit to Greece in 1951 perhaps helped to strengthen this intention – so when I was commissioned to do a reclining figure to be placed on the terrace of the Time and Life building, New Bond Street, I took the opportunity of making this draped figure in plaster (for bronze).

Drapery can emphasise the tension in a figure, for where the form pushes outwards, such as on the shoulders, the thighs, the breasts, etc., it can be pulled tight across the form (almost like a bandage), and by contrast with the crumpled slackness of the drapery which lies between the salient points, the pressure from inside is intensified.

Drapery can also, by its direction over the form, make more obvious the section, that is, show shape. It need not be just a decorative addition, but can serve to stress the sculptural idea of the figure.

Also in my mind was to connect the contrast of the contrast of the sizes of folds, here small, fine and delicate, in other places big and heavy, with the form of mountains, which are the crinkled skin of the earth. (This analogy, I think, comes out in close-up photographs take of the drapery alone.)

Although static, this figure is not meant to be in slack repose but, as it were, alerted.’[2]

‘Over the years, amidst an unusually active career in law and business (from 1932 until his retirement in 1974, he was the president and subsequently chairman of North-western Utilities, Canadian Western Natural Gas Co., Ltd. And Canadian Utilities Ltd.), Mr H.R. Milner compiled one of the most extensive art collections in Western Canada. While these works were obviously purchased for the sake of his own, and his family’s pleasure, it is to his great credit that he collected with such taste and in such a public spirit. His collection spans the history of Canadian art, from Paul Kane through the Group of Seven and David Milne and contains works of considerable historical importance as well as beauty.

[1] Sculpture in the Open Air: A Talk by Henry Moore on his Sculpture and its Placing in Open-Air Sites 1955, edited by Robert Melville, typescript copy in HMF library cited in Henry Moore: Writings and Conversations, edited by Alan Wilkinson, Lund Humphries, Aldershot, 2002, pp. 278-280.