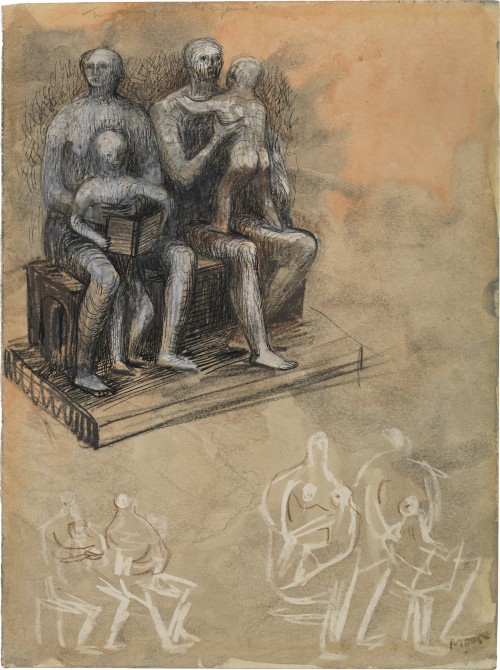 Recorded in the Henry Moore Foundation archives as HMF 2213

The Earl of Drogheda, Ireland

Marlborough Fine Art, London, acquired from the above

Helene Rabb Cahners, USA, acquired from the above, then by descent

Waterville, Maine, Colby College Museum of Art, An Exhibition of Works of Art from the Collections of the Members of the Advisory Council for the Friends of Art at Colby, 1971

Moore’s studies of Family groups were originally inspired by a public commission for Village College Impington, suggested by the architect Walter Gropius in the late 1930s. The school aimed to employ the progressive educational ideas of Henry Morris, the Director for Education in Cambridgeshire, in particular that rural schools should provide facilities for parents as well as children, providing space for films, plays and lectures, so as to become the social centre of the community. This notion of family unity was to be realised in Moore’s sculpture.[1] Postponed by the advent of War, Moore returned to the idea in 1944 when the commission was temporarily revived and began making ‘drawings in note book form of family groups. From these notebook drawings I made a number small of maquettes…Some of the maquettes were ideas for bronze, but most of them were for stone because for the Impington school I felt stone would be the suitable material.’[2] Moore developed a number of versions on the theme between the autumn of 1944 and the spring of 1945, one of which is the collection of the Tate.

Moore was inspired by the family group from the early 1940s, though it has been customary to attribute his interest in the subject to the longed-for birth of his only child Mary in 1946. Following the end of the Second World War, Moore’s Family group sculptures took on even greater significance as symbols of familial strength, protection and nurturing. The three member family naturally evolved from the artist’s Mother and child theme, which had appealed to Moore because of its significance throughout the history of art, for the emotive relationship it represented and for its potential for formal development between figures.

France. After being wounded in action in November 1917 at the battle of Cambrai, Moore was excused from active service. He returned to England, where he became a physical education instructor in the army. At the end of the war, Moore received a veteran’s grant to study at Leeds School of Art and in 1921 he joined a course at the Royal College of Art in London. A further grant enabled him to travel extensively from 1925, visiting Rome, Florence, Venice, Ravenna and Paris, where he met Picasso, Giacometti, Ernst, Eluard and Breton among others. On returning from his travels Moore was appointed Professor of Sculpture at the Royal College of Art where he worked two days a week until 1931, as well as teaching at the Chelsea School of Art until 1939. He was appointed an Official War Artist during the Second World War from 1940–1942 for which he made a series of drawings of people sheltering in the London Underground, as well as studies of miners at the coal face. In these pictures he frequently used watercolour over wax crayon.

[1] A detailed account of the commission is recalled by the artist in Philip James, Henry Moore on Sculpture, MacDonald, London, 1966, pp. 224–229.