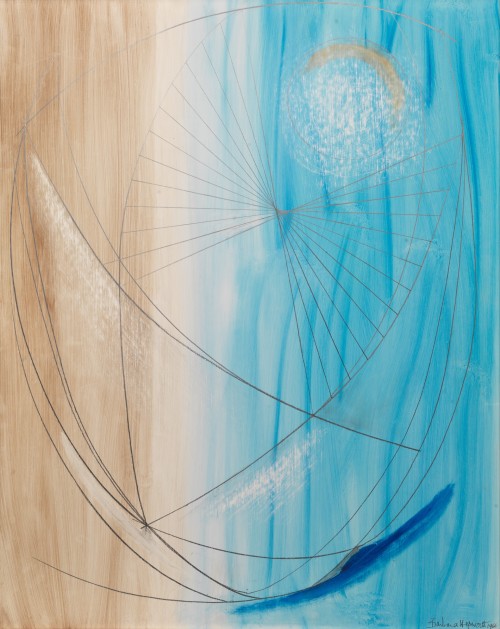 signed, dated and inscribed with the title on the reverse:

In 1966 Barbara Hepworth: Drawings from a sculptor’s landscape was published, in which the artist wrote from St Ives in April that year, ‘Whenever I am embraced by land and seascape I draw ideas for new sculptures: new forms to touch and walk round, new people to embrace, with an exactitude of form that those without sight can hold and realize.’[1] Stinged figure, 1966, which is reproduced in the book, seems to exemplify Hepworth’s idea of the meeting of land, sea and form and was likely made in her studio overlooking the Atlantic beach of Porthmeor. The Cornish landscape had inspired Hepworth’s work since she first moved there in 1939 with Ben Nicholson and their triplets and continued to do so until her death in 1975. The palette of Stringed figure directly references the golden, light brown sand and exquisite turquoise sea of the Cornish coast, the brush strokes visible in these sublime washes of colour evoking the ripples of breaking waves or tide marks in wet sand. Hepworth writes in the same essay: ‘The incoming and receding tides made strange and wonderful calligraphy on the pale granite sand which sparkled with felspar and mica.’[2] The form of the circle at the top right of the composition also references the natural world, either the sun or the moon, which featured prominently in her work at this time, as well as relating to the piercing of her sculptures. Hepworth’s love for her environment and the vitality she found in it, is clear in both her writing and art: ‘A sculptor’s landscape is one of ever-changing space and light where forms reveal themselves in new aspects as the sun rises and sets, and the moon comes up. It is a primitive world; but a world of infinite and subtle meaning. Nothing we ever touch and feel, or see and love, is ever lost to us. From birth to old age it is retained like the warmth of rocks, the coolness of grass and the ever-flow of the sea.’[3]

In contrast to the serene palette of merging coastal hues, lightly applied in striated vertical strokes (several blue washes ending in picturesque waves), Hepworth’s dynamic graphite lines define the sense of movement and mass she sought in her sculptures. Sweeping curves towards each of the boundaries and across the board, are accentuated below by thicker pencil lines and darker, more dense areas of paint; deep blue to the lower right and white lower left. The central arcs, which curve towards the circle are held in tension by straight diagonal strings connecting both sides of the form in its linear dance. As well as drawing onto the painted board, Hepworth has scoured its surface with light abrasions in certain areas to reveal the white primed board beneath, most visibly over the circle, further demonstrating her uniquely sculptural method of drawing. The artist writes, ‘Abstract drawing has always been for me a particularly exciting adventure. First there is only one’s mood; then the surface takes one’s mood in colour and texture; then a line or curve which, made with a pencil on the hard surface of many coats of oil or gouaches, has a particular kind of ‘bite’ rather like on slate; then one is lost in a new world of a thousand possibilities.’[4]

By the 1960s drawing had become an important and autonomous part of Hepworth’s oeuvre. In contrast to her Wartime pictures, Hepworth’s drawings of the 1960s (like her sculpture of the same period), are characterised by the range of forms and materials that she explored, emphasising the different qualities inherent in each distinctive media. While still concerned with the relation of colour and form, the rigorous linear structure that previously circumscribed the painted areas relaxed, allowing for a more expressive and spontaneous response to the material. Writing in Drawings from a sculptor’s landscape, Sir Alan Bowness elucidates upon the development of Hepworth’s drawn works of the 1960s and the centrality of the relation of figure to landscape: ‘What has most notably happened is that the drawings have become much larger and grander in scale, and altogether more painterly, with colour playing an increasingly dominant role. They might more properly be called paintings. The boards are prepared as before with scumbled oil paint, making rich and variegated textures on which accents of stronger colour and thicker paint are placed. Of late the paint has tended to be more liquid, and sometimes already establishes the form which the drawn pencil line does little more than confirm...But it is the tightness and precision of the pencil line which attract attention. This is at once suggestive of sculptural form, and yet is also mysterious in a celestial way – it is no accident that words referring to sea and sky should so often appear in the titles... Many of the drawings of the 1960s were made within view of the sea, in a studio overlooking the Atlantic beach of Porthmeor, and the movement of tides and the forms of waves and wave patterns on the sea-shore sometimes provide their immediate inspiration.’[5] 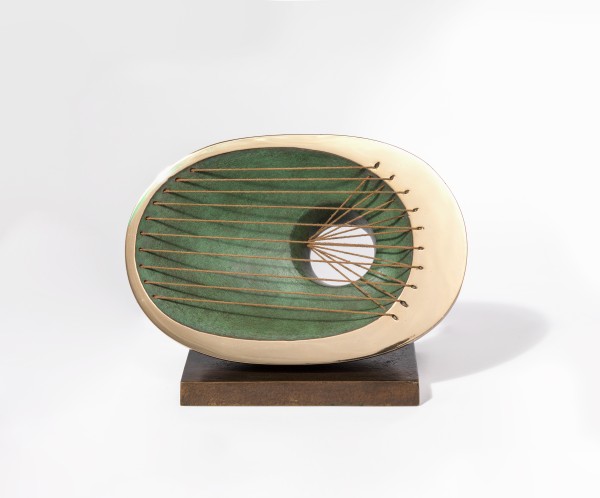 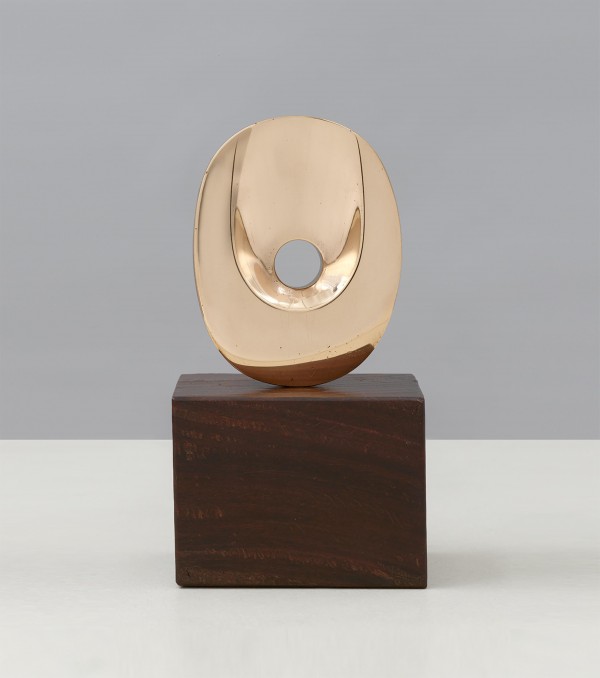 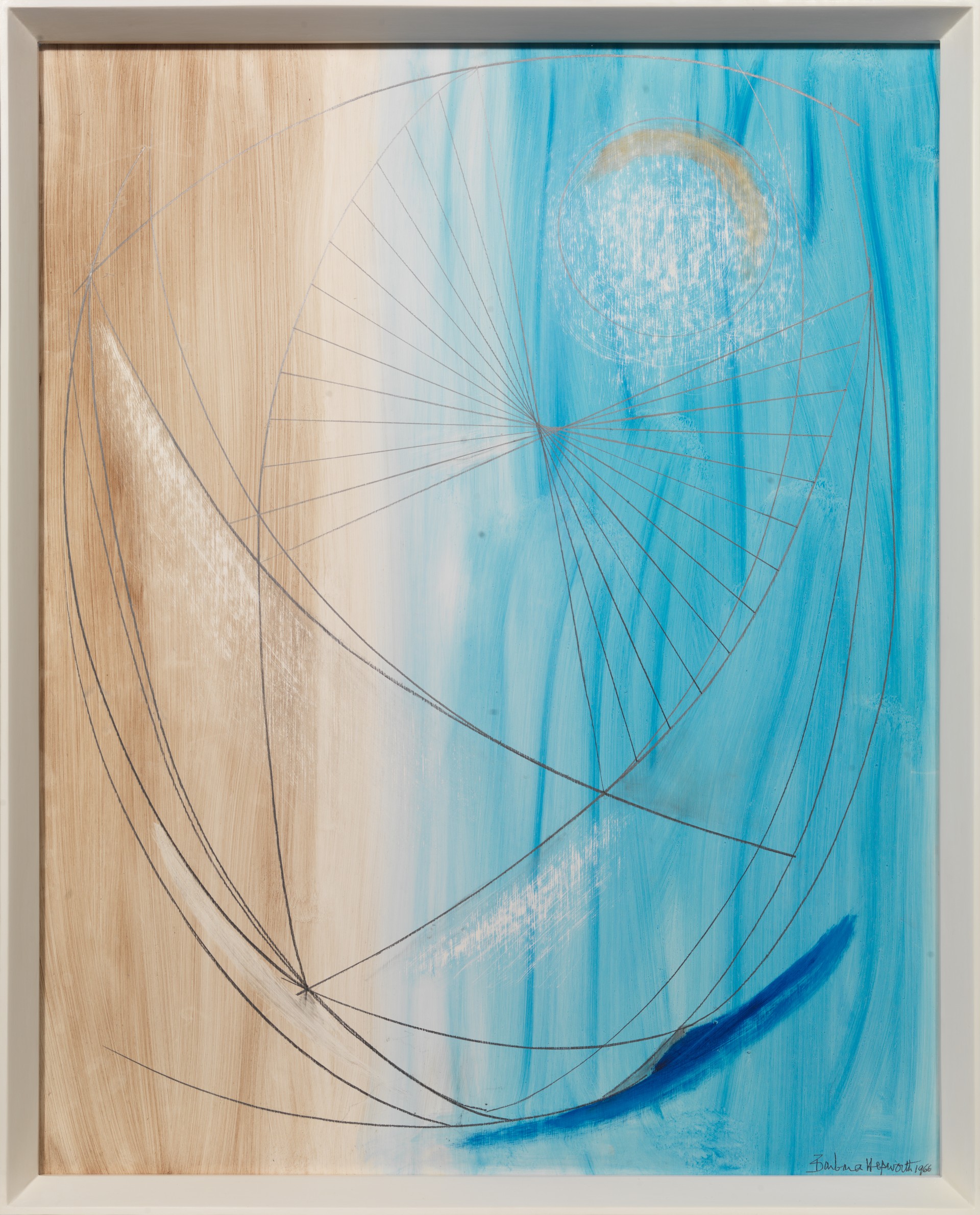