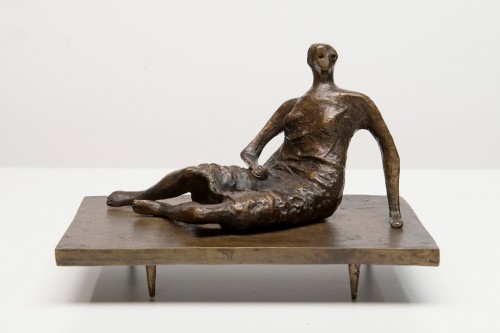 On its original 'table base'.

Barbara Lambrecht, acquired from the above in 1995, sold to benefit the Rubens Prize Collection in the Museum of Contemporary Art in Siegen

The present work is a maquette for the larger than life-sized, Draped reclining woman, 1957-8 [LH 431], made in an edition of 6 (plus two artist’s copies), casts of which are in the collections of the Sainsbury Centre for Visual Arts, University of East Anglia, Norwich; the Tate; the Bayerische Staatsgemäldesammlungen, Munich; the Staatsgalerie, Stuttgart; and the Norton Simon Museum of Art, Pasadena.

During the mid-1950s a series of public commissions (including a monumental sculpture for the UNESCO headquarters in Paris) inspired Moore to explore the integration of figurative sculpture in an architectural setting. As a result he created a group of drawings and maquettes which feature draped figures seated on or against geometric architectural elements such as benches and steps. While the setting of the seated figure was a departure for Moore, the draped figure recalled an interest apparent in his earlier shelter drawings. Moore’s interest was revitalised by his visit to Greece in 1951, inspiring a return to the study of drapery and its importance in the revelation of form: ‘Drapery can emphasise the tension in a figure, for where the form pushes outwards, such as on the shoulders, the thighs, the breasts, etc., it can be pulled tight across the form (almost like a bandage), and by contrast with the crumpled slackness of the drapery which lies between the salient points, the pressure from inside is intensified.’[1] Moore’s first draped figure conceived in bronze was the Reclining figure commissioned for the Time-Life building in 1952–53, during which he developed a technique that undoubtedly informed the modelling of diaphanous material represented here: ‘gradually I evolved a treatment that exploited the fluidity of plaster. The treatment of drapery in my stone carvings was a matter of large, simple creases and folds but the modelling technique enabled me to build up large forms with a host of small crinklings and ruckings of the fabric.’[2]

France. After being wounded in action in November 1917 at the battle of Cambrai, Moore was excused from active service. He returned to England, where he became a physical education instructor in the army.

At the end of the war, Moore received a veteran’s grant to study at Leeds School of Art and in 1921 he joined a course at the Royal College of Art in London. A further grant enabled him to travel extensively from 1925, visiting Rome, Florence, Venice, Ravenna and Paris, where he met Picasso, Giacometti, Ernst, Eluard and Breton among others. On returning from his travels Moore was appointed Professor of Sculpture at the Royal College of Art where he worked two days a week until 1931, as well as teaching at the Chelsea School of Art until 1939. He was appointed an Official War Artist during the Second World War from 1940–1942 for which he made a series of drawings of people sheltering in the London Underground, as well as studies of miners at the coal face. In these pictures he frequently used watercolour over wax crayon. 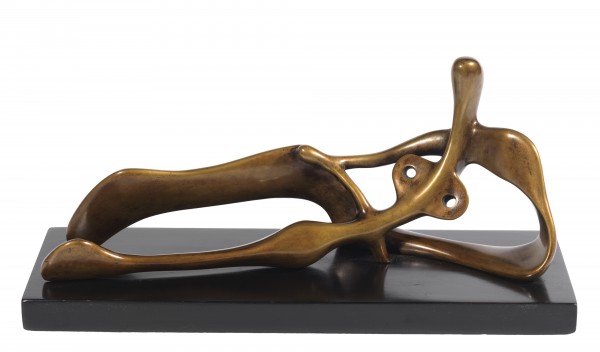