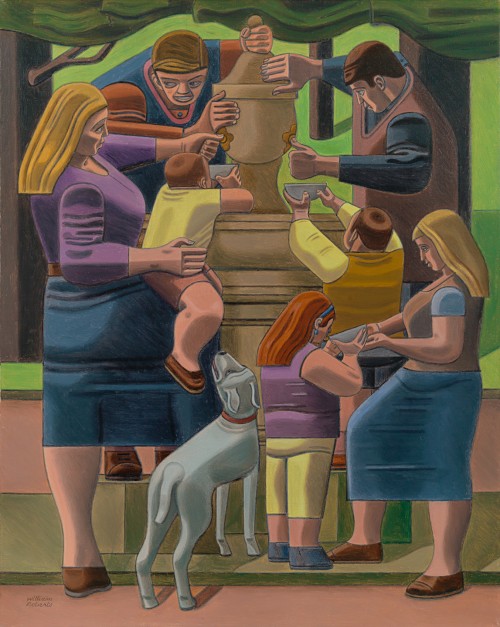 In a modern gilded frame

This painting is included in the online catalogue raisonné An English Cubist: William Roberts 1895-1980 by David Cleall and Bob Davenport

In 1946 William Roberts moved to 14 St Mark’s Crescent, backing on to the canal near Regent’s Park, London NW1, where he lived with his family for the rest of his life. His routine included a daily walk across Primrose Hill and in other London parks. He would make studies of details that caught his interest such as this family grouping at a drinking fountain and worked them up into complex compositions in his studio.

Painted in 1967, the year after Roberts achieved full Royal Academician status, The drinking fountain is representative of the style Roberts had been perfecting since the Second World War. Andrew Gibbon Williams writes: ‘Rather than rethink his pictorial language, Roberts allows his pictures to rely for their impact on unusual and startling visual juxtapositions.’[1] This is certainly the case with The drinking fountain, where juxtapositions are visible in both the strikingly contrasting colours and shapes of the figures. For example, the pale yellow of the children’s sleeves and trousers and the blue and purple of the women’s clothing. The work has a simple composition, as the figures are crowded evenly around the central drinking fountain. However, the overall visual result is more complex, with Roberts’s use of strong horizontal lines in the folds of the figures’ clothes mirrored in the modelling of the fountain, in contrast to the diagonals of the children’s limbs. This combination serves to give the simple act of adults helping children to drink from the fountain an almost ceremonial quality.

We are grateful to David Cleall for his assistance with the cataloguing of this work.[2]

Born in Hackney on the 5th June 1895, William Roberts was apprenticed to the poster designing and advertising firm of Sir Joseph Causton Ltd in 1909, while attending evening classes at St Martin’s School of Art, London. In 1910, Roberts won a London County Council Scholarship in drawing to the Slade School of Art and remained there for the next three years becoming friends with fellow students David Bomberg and Jacob Kramer (other Slade contemporaries included CW Nevinson, Mark Gertler, Stanley Spencer and Paul Nash). Following his studies, he travelled to Italy and France in 1913 before briefly joining Roger Fry’s Omega Workshops. In 1914, Roberts met Wyndham Lewis who borrowed two of his pictures to hang at the Rebel Art Centre and convinced him to join their rival establishment. Roberts became part of Lewis’s circle, which included Edward Wadsworth, Frederick Etchells and Cuthbert Hamilton, joining them for meetings and dinners (later recalled by Roberts in his painting The Vorticists at the Restaurant de la Tour Eiffel: Spring 1915 (1961-2, Tate, London). He was one of a list of signatories to the Vorticist Manifesto in the first issue of Blast, published in June 1914 and exhibited at the Vorticist exhibitions of 1915 in London and 1917 in New York.

On the 4th March 1916, Roberts joined the Royal Field Artillery as a gunner and went to France in July. He returned to England in April 1918 as an Official War Artist, having painted The first German gas attack at Ypres (1918, National Gallery of Canada, Ottawa) for the Canadian War Records Office. He was joined in Percy Street by Sarah Kramer, the sister of Ukrainian-born artist Jacob Kramer (1892-1962). Their only son John was born in 1919 and Roberts demobilised the same year. In 1920, Roberts met TE Lawrence and started making drawings for his edition of the Seven Pillars of Wisdom (published 1926). He held his first one-man exhibition at the Chenil Galleries in 1923. Roberts became a visiting teacher at the Central School of Art, London in 1925 and continued there until the outbreak of war, when the family moved to Oxford. During the war he taught one day a week at the Oxford Technical School. In 1946 Roberts moved back to London, near Regent’s Park, and continued teaching at the Central School of Art. From 1948, he began to exhibit at the Royal Academy and continued to do so every year until his death. In 1956-8 he published The Vortex Pamphlets in response to the Wyndham Lewis exhibition at the Tate Gallery. In 1958 he was elected an Associate of the Royal Academy, and a Royal Academician in 1966. 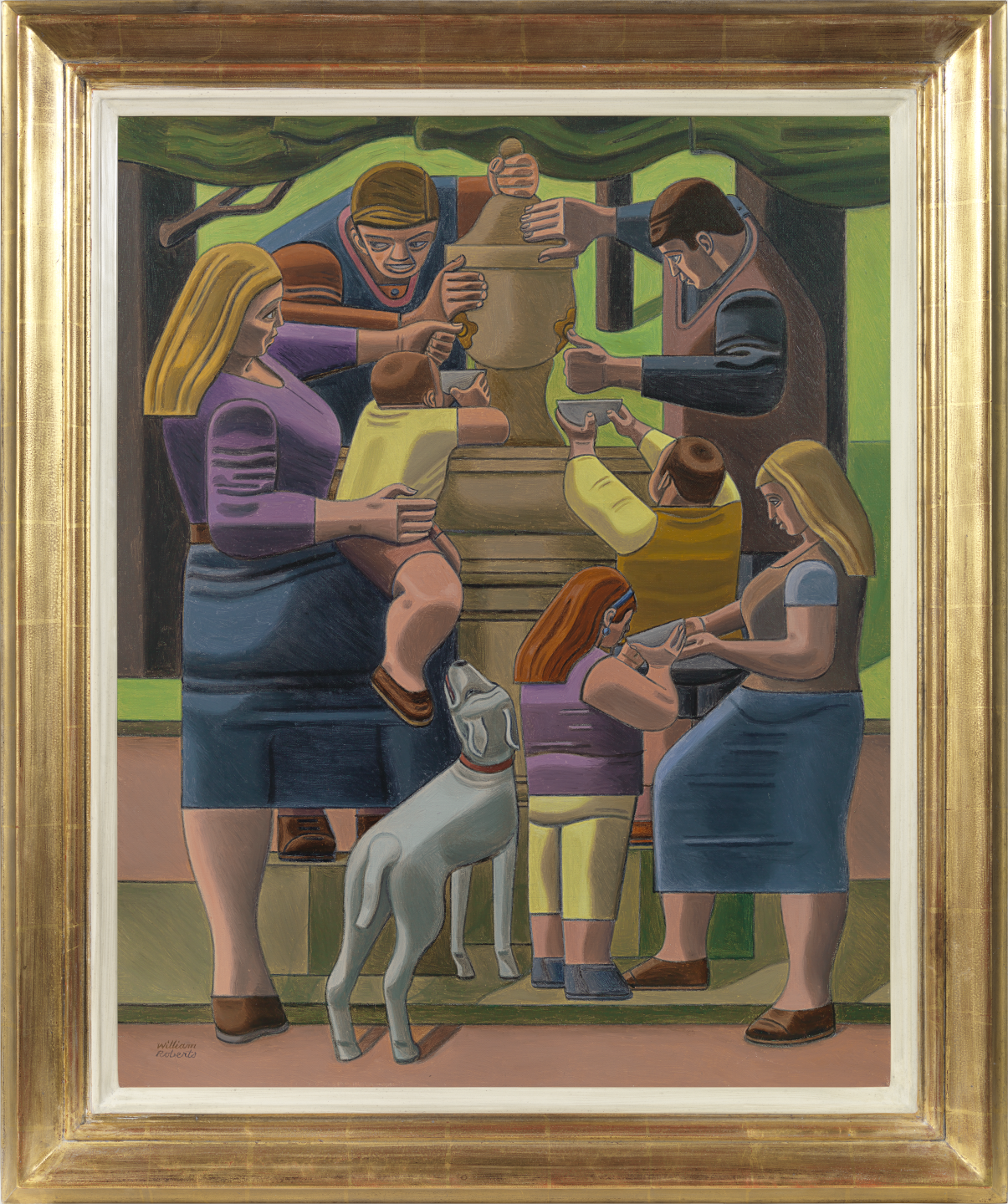