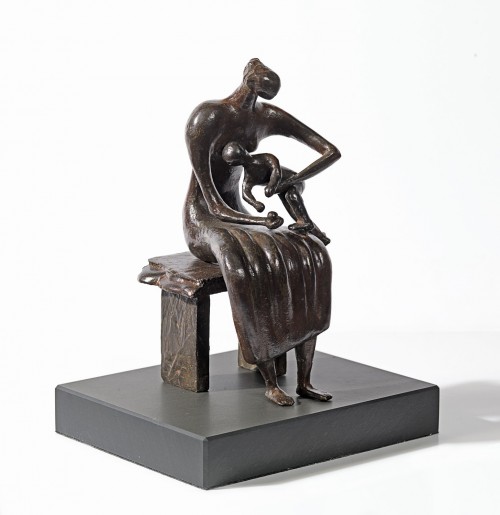 Maquette for Mother and child with apple

Maquette for Mother and child with apple 1956

‘Very young babies have always fascinated me; the big head, the frog-like quality of the body, and their kicking vitality.’[1] Henry Moore

An exquisite sculpture with exceptional provenance, Maquette for Mother and child with apple 1956, explores the playful yet protective relationship between a graceful mother and her vivacious child. A sympathetic balance between the serene stability of the seated parent and the lurching animation of the clambering infant, the semi-abstract figures are nonetheless united by the repetition of their curved, open arms, their hands reaching towards and replicating the fascinating fruit. The broad, bowed shoulders of the mother and her elongated arms steady and encircle the dynamic figure of the child, recalling both its birth and rapid development. This elegant and intimate work demonstrates the simultaneous qualities of immediacy and timelessness, the personal and universal, which characterise Moore’s small-scale figures of the mother and child.

Developing from the public commission of a Madonna and Child for the Church of St Matthew’s, Northampton in 1943-44, Moore later wrote of the subject, ‘The ‘Mother and Child’ is one of my two or three obsessions, one of my inexhaustible subjects. This may have something to do with the fact that the ‘Madonna and Child’ was so important in the art of the past and that one loves the old masters and had learned so much from them. But the subject itself it eternal and unending, with so many sculptural possibilities in it – a small form in relation to a big form, the big form protecting the small one, and so on. It is such a rich subject, both humanly and compositionally, that I will always go on using it.’[2]

A cast of the large-scale version of this exceptional bronze, Mother and child with apple (29 ¼ in / 74.5 cm height, in an edition of 10), is at The Study Gallery, Poole, part of Bournemouth & Poole College of Further Education. Moore returned to the subject in 1981 on paper and then selected a work to be woven into one of the largest tapestries produced from his drawings in 1982-83, both in the collection of the Henry Moore Foundation.

The art patron and historian, Baron Kenneth Clark (1903-1983), was the original owner of this exceptional work and one of the most influential figures in British art of the twentieth century. A close friend of the artist, Clark purchased drawings from Moore’s first solo exhibition at the Warren Gallery in 1928 and continued to collect his work throughout his lifetime. He also played a pivotal role in museum purchases of his work, including the Museum of Modern Art, New York and the Tate Gallery, London, prior to the Second World War. During the War, Clark proposed and became Chairman of the government’s War Artists’ Advisory Committee, in which role he recommended Moore be made an Official War Artist and commissioned his shelter drawings, which radically transformed the artist’s reputation. Famous for promoting and popularising the arts, especially as presenter and writer of the Television series and book, Civilisation, 1969, Clark was also Director of the National Gallery, London from 1935 to 1945, Surveyor of the Kings Pictures, 1934-44, Slade Professor of Fine Art at Oxford, 1946-50, and Chairman of the Arts Council, 1953-60, as well as Chairman of the Independent Television Authority, 1954-57.