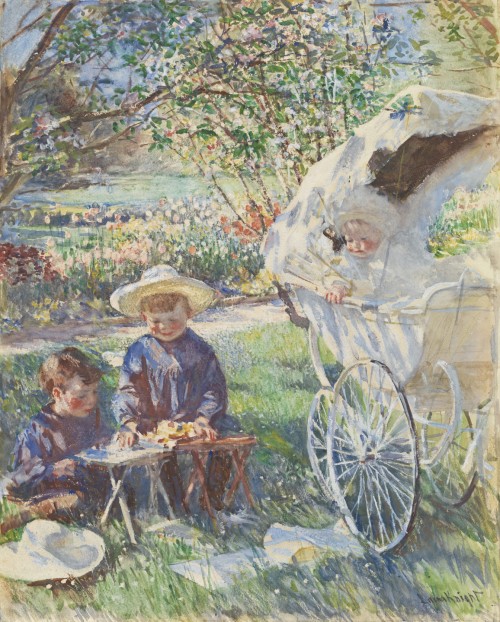 Acquired directly from the artist by Sir Edward Penton circa 1910, then by descent

The boy depicted on the far left is Stephen Penton who was Headmaster of Lower Canada College in Montreal, from 1941 to 1968.

The Penton children was painted c.1910, three years after the Knights had moved to Newlyn. This was a joyful period in Laura’s life during which her paintings took on a new vibrancy, it was ‘...a carefree life of sunlit pleasure, and leisurely study.’[1] In the fertile atmosphere of west Cornwall, Laura’s work blossomed, revealing an exceptional understanding of light, brilliant colour and free, vigorous brushwork, passing, she later declared, from ‘Dutch influences, through a Joshua Reynolds period of amber colouring and varnish glazes into direct painting.’[2] Norman Garstin, one of the first generation of Newlyn artists, described the region’s dramatic effect upon the

Knights: ‘...there came over their work an utter change in both their outlook and method: they at once plunged into a riot of brilliant sunshine of opulent colour and of sensuous gaiety.’[3] The outbreak of the First World War ended this idyllic period and in 1918 the Knights moved to London, although they kept studios at Lamorna for several years, and returned during the summers to paint Cornish landscapes.

Knight’s superb handling of watercolour is evident in this dazzling en plein air portrait of Stephen, Michael and Anthony Penton, painted in their grandfather’s New Forest garden. In contrast to the broad brushstrokes of her oil paintings, Laura’s delicate and detailed watercolours of this period demonstrate her highly refined technique.

In 1900 together with her sister Eva, Laura moved to Staithes (1900 – 07), where in 1903 she married Harold who she met at the Nottingham School of Art. In the last three years Laura and Harold spent short periods of time at the artist colony at Laren, Holland. In 1903 Laura had her first painting hung at the Royal Academy Mother and Child No.1

Towards the end of 1907 Laura and Harold moved to Cornwall where they stayed for ten years till 1918. Laura developed a close friendship with both Alfred Munnings and also with Lamorna Birch and his wife “Mouse” and spent much time in Lamorna.  Several of Laura’s well known early works were painted in and around Lamorna e.g. Lamorna Birch and his daughters 1913; Spring 1916.

On moving to Cornwall Laura’s work developed and flourished; her work became much softer and yet aglow in colour and painted en plein air. As in Staithes Laura continued to paint children e.g. The Beach 1908; The Boys 1910 and Flying the Kite 1910. The Beach was a transitional work moving away from the less flamboyant painting of the Staithes period.

Following the move to London another new period of change started in her work, as she became increasingly absorbed in new subject matters, that were to include –the ballet, the theatre, the circus and, country and rural scenes.

Although Laura attended the Diaghilev Ballet Russes before the Great War 1910 – 1914, it was not until the 1920’s that she had obtained permission to work backstage.  In the world of ballet, Laura befriended and painted many of the great ballerinas and ballet dancers of the time that included Karsavina, Lopokova, Pavlova, Spessitseva, Tchernicheva and Massine amongst others.

Working backstage at the ballet improved her drawings as it forced her to produce quick drawings that reduced line to a minimum, they were equally important drawings that were accurate. If Laura’s drawings were inaccurate the famous ballet instructor Cecchetti would blame the dancer not Laura. Also in the 1920s Laura met Bertram Mills and the Great Carmo that began Laura’s famous circus scenes.

In the early 1920’s Laura also experimented and developed other artistic techniques that included etchings, aquatint, linocuts, woodcuts and lithographs (during WWI she had already produced painted jewellery, ceramics and enamel plaque work with Ella Napper).

The 1920’s were a decade of major achievements for Laura:

- She was made an Associate of the RA in 1928, being only the second woman after Anne Surymerton

- Appointed a DBE 1929, being the first woman artist ever to receive this title

Laura is not famous for her portraiture, but the wide range of portraits are perhaps not sufficiently recognised as they include the famous such as Anna Pavlova; George Bernard Shaw; Gwen Ffrangcon-Davies; Lubov Tchervichev; Paul Scofield, WH Davies as well

as the not so famous such as clowns, gypsies, children and other people, that include Dolly in

In the 1930’s Laura spent much time in the Malverns invariably receiving invitations to Barry Jackson’s Malvern Festivals and where as his houseguest she met authors, playwrights, actors and notabilities from all walks of life. In the same period Laura was drawing/painting boxers at Blackfriars and painting ceramics dinner sets for Arthur Wilkinson and Clarice Cliff!

During the War Laura received various Commissions via the War Artists Advisory Committee e.g. In for repairs 1941, A Balloon site, Coventry 1942, Ruby Loftus 1943, Take Off 1944, factory workshops, Land Girls and many others. Laura Knight’s fame continued after WWII, with her commission for the Nuremberg Trials 1946, being elected to serve on the Royal Academy Hanging Committee 1946 and a further Commission for the Coronation 1952.

Laura found most of her painting subjects in London during the winter months and in the brighter months of the year they stayed in their hotel in Colwall.  Laura painted many agricultural and country scenes in the Malvern area before, during and after WWII.

theatrically minded and spent many seasons with him and Scott Sunderland. Later Barry

sketch books with perhaps the best drawings I ever did of life backstage” p.325 Magic of a Line.

Laura started life in poverty, but became financially successful and developed lasting friendships who ranged from not only gypsies, circus folk, the farm and factory worker but also with those more fortunate, that included famous authors, actors, playwrights, judges at Nuremberg and aristocrats. Laura also travelled widely in the UK, Europe and America.

All this was achieved in an era, when women were still fighting to vote and in instances where women were at times not generally accepted in some masculine quarters.

All of these friends and most of her acquaintances kept in contact with this remarkable woman to the end, as demonstrated by her Memorial service held at St James Church, Piccadilly 28th July 1970.

In her last years Laura asked me “Have I tried too many different media, too many different subjects?”  I could not give her an answer as she then went on, “I do not know, except that my inner self continues to say even today - go on, keep on trying something different” 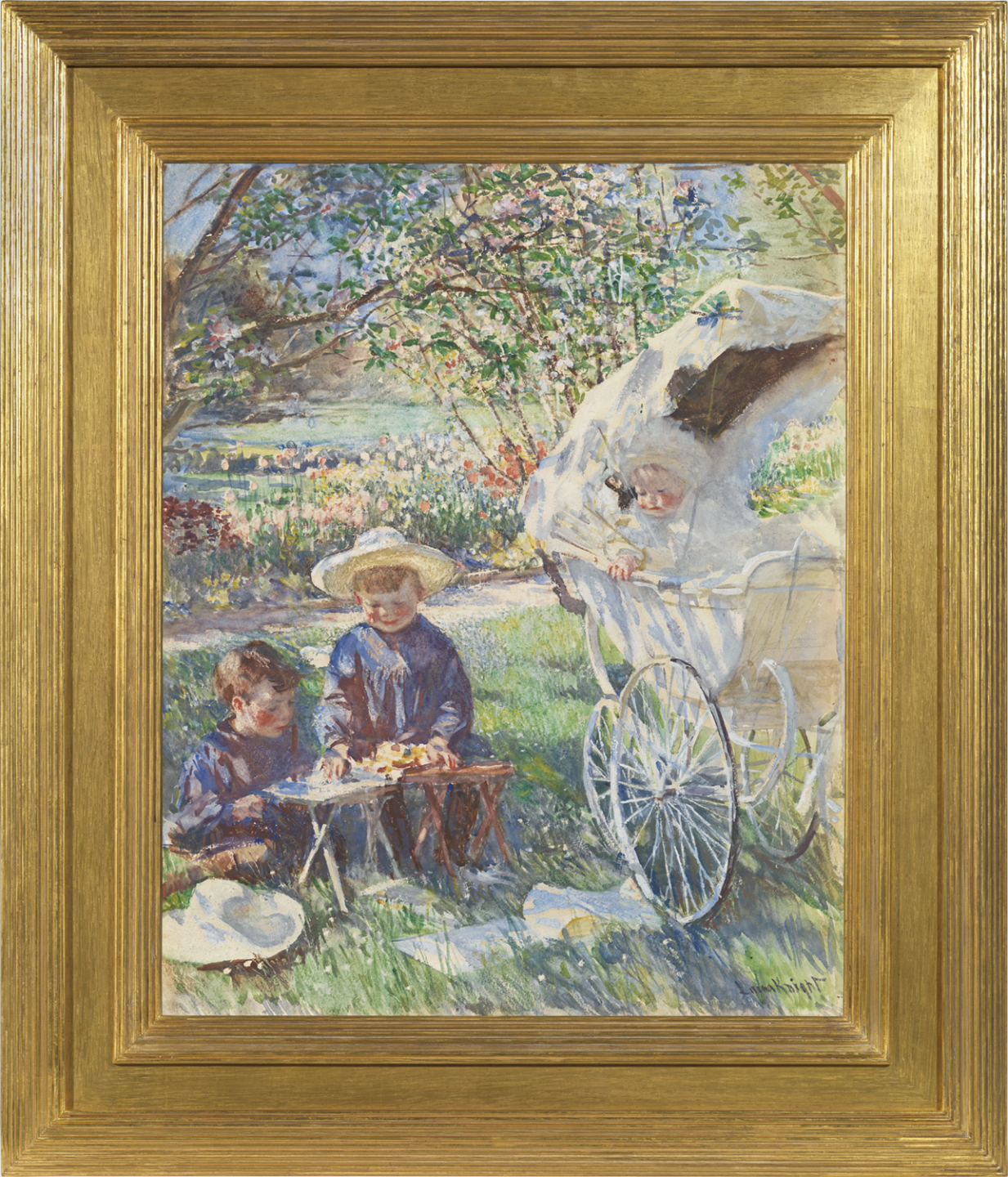