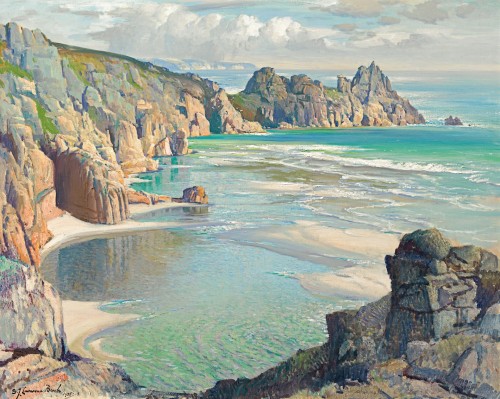 Private collection, Scotland, acquired directly from the artist during the 1930s, then by descent

This spectacular, secluded landscape depicts the exceptionally beautiful Pedn Vounder beach from the coastal path of Treen Cliff, looking across light-gold crescents of sand and turquoise pools formed by the incoming tide towards the rugged granite headland of Treen Castle or Treryn Dinas and the Logan Rock in the distance. Pedn Vounder is located at the eastern end of Porthcurno Cove on the southwest coast of Cornwall and on a low tide in spring can be reached from the neighbouring beach. Birch painted and exhibited at the Royal Academy of Arts in London, a pair of paintings of this subject in 1927: Morning: Pedn-e-Vounder and Treen Castle, Land’s End and its companion, Pedn-e-Vounder and the Logan Rock near Land’s End. The present work revisits the magnificent site and combines the panoramic view and sky of the first, with the elevated perspective of the second in this stunning coastal scene. Birch had already discovered the bay by 1903, on a cycling and sketching trip between Lamorna and Land’s End on the Lizard peninsular, with the painters, Arthur Tanner and Henry Scott Tuke. Austin Wormleighton recalls the three artists paused for some time at Pedn Vounder ‘watching the sea cream across the broad sandy bay and settle in deep green pools beneath the cliffs.’[1]

Birch’s paintings of the cliffs and beaches of Cornwall are among his most powerful and dramatic works; his skill in capturing the fleeting effects of light on water in brilliant colour, like his friend Laura Knight, reflecting his love of nature. The year before this consummate picture was painted in 1935, Birch was elected a Royal Academician.

It was with nostalgia and respect that Dame Laura Knight recalled the friendship and talent of the landscapist Samuel John Lamorna Birch, of whom she wrote, 'his zest for life itself, and for his work never waned.  His achievement in the art of painting was due entirely to his own effort.   Instead of a silver spoon it might be said that he was born with a paint brush in his mouth; and in his heart, come what might, the determination to make the best use of it'.

Born in Egremont, Cheshire, the early death of his father prompted the family's move to Manchester and necessitated Samuel to leave school at the age of twelve, in order to start work as an office boy. At the age of seventeen, he went to work in a mill at Halton near Lancaster, where he lived with a gamekeeper, who instilled into him his lifelong interest in flyfishing.   Later, he was employed as an industrial designer in a linoleum factory, a job he loathed, but which brought him financial independence, and enabled him to paint and sketch at weekends.

He first visited Newlyn in 1889 and took lodgings at Boleigh Farm near the Lamorna valley.   Influenced and advised by Stanhope Forbes, Birch went to study at the Atelier Colarossi in Paris in 1896, but spent most of his time painting along the banks of the river Seine. All his paintings completed in France were sold on his return, in an exhibition at Lancaster.

Birch was one of the first to settle at Lamorna, a location that soon became an artistic colony in its own right. In 1902, he married Emily Houghton Vivian and they moved to Flagstaff Cottage at Lamorna Cove. His early works painted in the 1890s, in their muted tonal colours, denote the influence of the Newlyn artists. During the 1900s, he brightened his palette, using pure colours with a new painterly freedom, comparable to the works of Dame Laura Knight. His intense use of colour, manifest in brilliantly lit landscapes and natural atmospheric effects flourished in his works of the 1920s, and continued in the large landscapes and seascapes that he executed throughout the 1930s and 1940s.

A prolific artist, Birch exhibited regularly at the Royal Academy from 1893 until his death in 1955, and was elected a Royal Academician in 1934. He was also an accomplished watercolourist and through his life, made many pencil drawings tinted with water paints, and pure watercolours, continuing to use both media during his entire career. He was elected a member of the Royal Society of Painters in Watercolour in 1914.

Inspired by his love of nature, Dame Laura Knight vividly recalled Birch 'one afternoon, and his telling me what wonderful hours he had spent that morning sitting on its (Lamorna) bank, watching the effects of sky reflection in the stillish water, ranging from blue and gold tinged cloud to iridescence'. Indeed, it was as a landscapist, and in his depiction of the ever changing effects of light on water, that Lamorna Birch particularly excelled, justifying his adopted name. 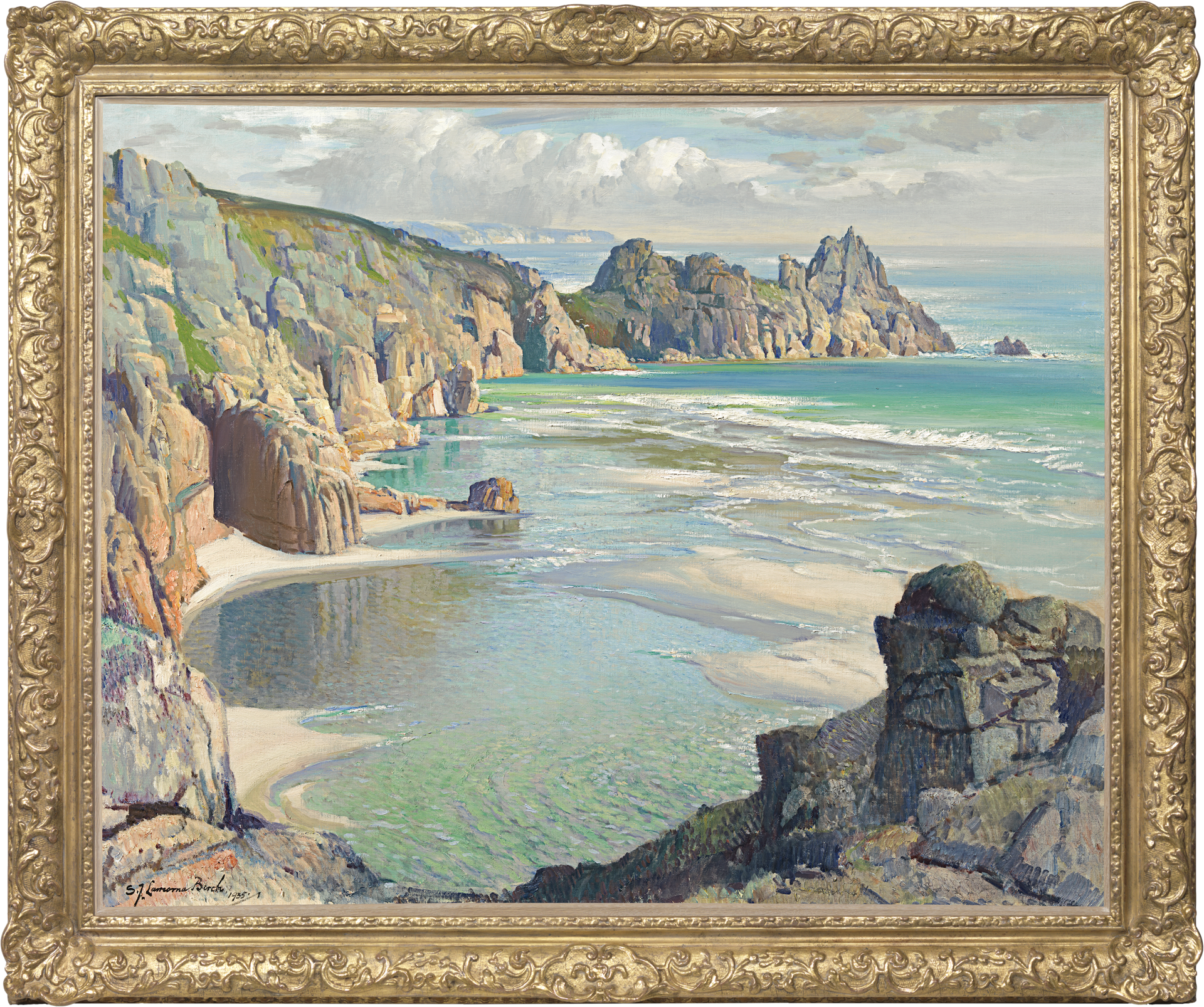