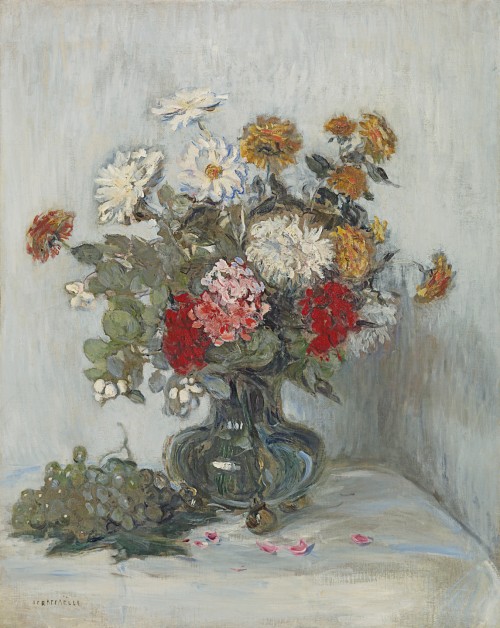 In the 1880s Jean-François Raffaelli lived in Asnières and was celebrated for his Naturalist, psychologically acute paintings of the marginalized figures of society, such as rag-pickers and absinthe drinkers. In 1892 he moved further into the centre of Paris, taking a studio at 202 Rue de Courcelles in the 17th arrondissement. His interests shifted to the ‘modern life’ of the bourgeoisie on the Grands Boulevards, painted with a lighter palette and dazzling, allusive brushwork. He also painted portraits and still lifes.

Galerie Brame & Lorenceau date this painting of Fleurs et raisins to circa 1896-99. It shows Raffaëlli’s instinctive, painterly approach, ‘drawing’ with colour to suggest the shape and structure of the flowers and the myriad reflections of stems and water in the glass vase. Raffaëlli makes superb use of a range of neutral tones, notably the shimmering whites, greys and cream of the background and tablecloth, and the grey-greens of the foliage and grapes, to suggest radiance and space. Against this radiance the scarlet geraniums and yellow and red zinnias glow all the more brightly. A few red petals have fallen among the blue shadows of the tablecloth, bringing the foreground into focus.

This painting was owned by the Bordeaux print dealer Vincent Imberti, who bought the stock of the influential Parisian art publisher and picture dealer Maison Goupil in 1920. The Raffaëlli was sold from Imberti’s private collection in the 1920s. The remaining Goupil stock and archive are today in the Goupil Museum, Bordeaux.