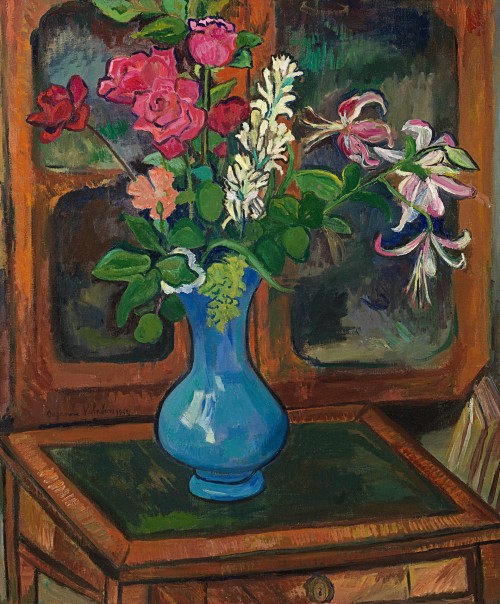 The authenticity of this work has been confirmed by the Comité Utrillo-Valadon, inv. no.7693. It will be included in the forthcoming catalogue raisonné of the work of Suzanne Valadon

Born poor and illegitimate, Suzanne Valadon enjoyed an artistic career which saw her end her days as the owner of a château in the Auvergne. As a teenager, she was a circus tightrope walker before becoming a model for Renoir, Zandomeneghi and Forain. Fired with the desire to succeed as an artist, Valadon carefully observed their working methods. Taught printmaking by Degas, she began painting full time upon her marriage to the stockbroker Paul Mousis in 1896.

Valadon proudly forged her own style, largely independent of her male artistic mentors. She painted confident nudes, sleekly bounded by black lines; bold landscapes and spare, forceful still lifes. In the 1920s and 30s she received increasing commercial success and critical approbation. Valadon was represented by the dealer Bernheim-Jeune from 1924 and there were retrospectives of her work in 1929 and 1932. In 1937 the Musée du Luxembourg bought three major paintings and many drawings.

In this painting Valadon chooses a bouquet of fragrant flowers. Deep red roses, tuberose and lilies mingle their heady scents. Bold outlines emphasize the dense, rounded complexity of the roses, the spiky forms of the unfolding tuberose and the lilies which twist and turn against the shadowed background of the cabinet. The sleek blue curves of the vase contrast with the warm brown tones of the furniture. Valadon ignores realistic perspective, tilting the table top towards the picture plane and making our perception of the room deliberately restricted. She responds powerfully to the exuberance of the natural world and makes us see the flowers through her eyes.

Suzanne Valadon was born in Bessines-sur-Gartempe, near Limoges, the illegitimate daughter of a housemaid. She had jobs as a milliner and waitress before joining the circus, but a fall put an end to her career as a tightrope walker. From the age of fifteen the beautiful Valadon modelled for artists in Montmartre, particularly those who frequented the Lapin Agile. She modelled for Puvis de Chavannes, Renoir, Zandomeneghi, Forain and others, shrewdly observing their working methods. Having taught herself to draw as a child, Valadon became an artist, producing her first signed and dated work, a pastel Self-portrait (Musée du Pompidou, Paris), in 1883. That year she gave birth to Maurice Utrillo (1883-1955), the future painter of Montmartre, whose father was the Spanish painter Miguel Utrillo (1862-1934). Maurice was left with his grandmother while Suzanne went back to work as a model.

In 1924 a contract with Bernheim-Jeune revived Valadon’s finances, enabling her to buy the Château de Saint-Bernard in the Auvergne. There were retrospectives of her work in 1929 and 1932; in 1937 the Musée de Luxembourg bought three major paintings and many drawings. Valadon died in Paris in 1938.